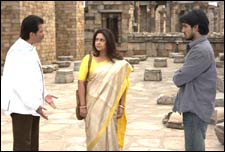 Samrat Sharma / fullhyd.com
EDITOR RATING
5.0
Performances
Script
Music/Soundtrack
Visuals
NA
NA
NA
NA
Suggestions
Can watch again
NA
Good for kids
NA
Good for dates
NA
Wait to rent it
NA
Subhash Ghai wants to be relevant again. In a time when Ghai's films and the styling thereof are widely thought of as campy and old, no one waits for a Ghai film anymore. There is no anticipation or nostalgia of the Subhash Ghai style of filmmaking. Ghai perhaps realized his importance dwindling, and this is a stab at getting relevant again, getting that edge back again.

Unfortunately, an ego massage for a filmmaker rarely makes for good cinema. Ghai in his ambition has chosen to tell a small-scale story of a fidayeen terrorist changing his mindset on Islam and India, through the eyes of compassionate people. This is such a complex little thematic bomb, ticking away merrily, waiting to blow up in the face of anybody who cannot handle it with the requisite subtlety, realism, detail and intelligence.

The film could have been used to answer so many important and relevant questions - what it means to be a Muslim in India in these times; what is the reality of the sovereign secular state that was established more than 60 years ago; the reality of situations we only see as black or white; why and how are fidayeen made; what can we do to change the reality. It is such a quagmire of political and social questions and themes that Ghai chose to reflect upon in the telling of his story.

Never once, however, does he even ask any of these questions. His telling of the story is content with seeming to be important by raising issues, but not giving shape or form to them by actually making this stuff relevant to the plot or the themes. Fidayeen Numair Qazi (Anurag Sinha) is entrusted by his Afghanistan-based group to blow up the VIP enclosure of the Red Fort in the Capital on 15th of August. He lands in Old Delhi posing to be a long lost relative of an ageing poet (Habib Tanvir), parents summarily dismissed as being killed in the Gujarat riots.

Once there, he meets with the local people, sees the love and care that a Hindu family is ready to shower him with, and shares some time with a local girl (Aditi Sharma). We are expected to believe that only the family that consists of an Urdu professor (Rajan Mathur played by Anil Kapoor), and his social activist wife (Shefali Chhaya), can understand the plight of Muslims, and the true face of the ground situation.

Sad to say, the initial parts of the film are actually its strongest. The mood setting and the location shooting are a far cry from the fantasy world Ghai usually inhabits, and though he fails every time an extra opens his mouth - or, more damnably, doesn't - this is a far cry from the over-the-top maudlin films you would associate him with. Once you know the family and the scores of really helpful and loving Dilli wallahs, Ghai ups the ante by adding to the pressure of the situation by getting Numair's Delhi resource compromised. Now he has to take the help of the well-meaning Professor, and his skeptical but ultimately loving wife.

When the post-interval half begins, Numair is now going to use them to get close to the VIP enclosure, while a whole lot of disparate threads of the film will also be explored (but never resolved). This is when, bizarrely enough, Ghai drops all pretence of being a serious filmmaker, and gets straight into the Subhash Ghai we all know and love (well, not so much).

Extremely over-the-top acting is mixed with much-caricatured characters. All restraints are loosened. Brazenly bad moments by the supporting cast in threads that do not make any sense are presented with smug self-importance. Shop-worn evil politicians who are friends pretend to be enemies. The list goes on, and we are talking of an hour of this.

Ghai's proclivities for the bizarre increase as time progresses in the film; culminating in an end that is as much of a copout as pretentious claptrap. Actually, scratch that: the film begins with feelings of smug self-importance and pretentiousness. By the time it dives into the second half, the director believes we have bought into the half-baked characterizations (which is everyone, except Qazi) and drops all of this to make an over-the-top preachy film, that has no grounding in reality. (An extremely out-of-sync and loud background score doesn't help things, either.)

While the film is trying to explore the possibility of good and evil and all things in between, the director still has not dropped his fascination with the extremes of good and evil, replete with imagery he has used before. There is a moment in the film when Mathur and his wife are playing with each other like children. It seems completely natural, though no context has been set for it. It is a piece of reality with no meaning. Then it culminates with them making love - uncalled for, not in sync with the first part, and so forced in its staging. That one scene is completely representative of the whole film for very same reasons.

Ghai once wrote a review of Dil Se in Filmfare magazine. He blasted the film for its surreal imagery, poetry without meaning, and a whole host of other issues that I forget. What is ironic, though, is that superficially, he seeks to make an opposite of that film, but is guilty of all the complaints that he (rightly or not) laid upon it. A certain-to-be-doomed film, but for the spirited acting and amazing screen presence of new guy Sinha, and some decent acting marred by bad writing from Kapoor and Shefali, I can only recommend it for that and, well, some interestingly shot scenes in the Old Delhi bylanes.

See Black & White full details
BLACK & WHITE USER REVIEWS
1 - 8 OF 8 COMMENTS
POSITIVE  |  NEGATIVE |  NEWEST  |  OLDEST  |  MOST HELPFUL  |  LEAST HELPFUL
USER RATING
5.3
16 USERS
Performances
Script
Music/Soundtrack
Visuals
NA
NA
NA
NA
Can watch again - NA
Good for kids - NA
Good for dates - NA
Wait to rent it - NA
Vinay Nair on 24th Mar 2008, 2:37pm | Permalink
I symphathize with any reviewer who has to fill a page writing about a movie like this. But, I have to say that Ghai is not the only reason the film is bad - he might an important reason but not the only reason.
RATING
6
Speedy on 21st Mar 2008, 9:56am | Permalink
what ru trying to convey mr.reviewer??u just described subash ghai!!!u guys r just proving that no site can offer worst reviews on hindi films as much as this site!!!!i seriously advise to hire some reviwers to review hindi films especially....
RATING
8
Thrishool on 18th Mar 2008, 7:15pm | Permalink
Please hire a review writer who doesnt writ eout of prejudice. This writer obviouly hates Ghai!!
And the hate is spilling.......
Was she reviewing subash himself of the cenima?

RATING
6
Kumar on 11th Mar 2008, 9:07pm | Permalink
its a bit slow but OK. i guess this movie is an effort of subash ghai trying to prove somebody something. the question is did he succeed?
RATING
4
S S2 on 11th Mar 2008, 3:33pm | Permalink
Serious Sam (Loved tht game) .... Thanks for the clarification. Nice example of how times change.Mani Rathnam made a 'Guru' and Ghai is whistling in the woods. Guess Subhash Ghai should stick to what he did best.
RATING
4
Serious Sam on 11th Mar 2008, 11:04am | Permalink
S S, Subhash Ghai did indeed do that review, and I remember reading it. I don't have the issue number at hand, nor a copy of the review to show. Filmfare is a TOI group publication itself, and Subhash Ghai was always on good terms with them. You may think that he wouldn't do that to a filmmaker, but he did, presumably because it was India's highest profile filmmaker's first real Hindi language film, and there was insane buzz, especially because it was produced by Shekhar Kapur, RGV and Rathnam.
RATING
2
Mithu Hiranand on 10th Mar 2008, 11:28pm | Permalink
Why not praise the movie for its content. At least it is better than stupid movies being released like Partner,Welcome,etc. This movie has a theme at least. It is just impossible to get in all that you have critized about the movie.
RATING
6
S S on 9th Mar 2008, 7:23pm | Permalink
I haven't seen the movie yet thus will not comment about the review(Thus the rating is same as given by the reviewer).I would like a clarification though - I know Ghai reviewed "Fiza" in TOI as it was directed by Khalid Mohd who was a TOI reviewer. Are you sure he reviewed "Dil Se" ? I find it hard to believe that Ghai would criticize Mani Ratnam's "Dil Se". The clarification would be appreciated. Thanks.
RATING
4
LEAVE A COMMENT
fullhyd.com has 700,000+ monthly visits. Tell Hyderabad what you feel about Black & White!
MORE MOVIES
Latest Reviews
SR Kalyana Mandapam
Ippudu Kaaka Inkeppudu
Thimmarusu
Kadhanika
Shukra
more
Deyyam - 2021
Tempt Raja
Vakeel Saab
Wild Dog
Sulthan (Telugu)
Sulthan
Rang De (Telugu)
Saina
Aranya
Chaavu Kaburu Challaga
Contemporary Reviews
Om Shanti Om
Taare Zameen Par
10000 BC (Hindi)
Simhadri
Swagatham
more
Lakshmi Putrudu
Okka Magaadu
Shootout At Lokhandwala
Welcome
Vantage Point
Pellikani Prasad
Jab We Met
Dhoom 2
27 Dresses
Random Reviews
Play Girls
Maa Aayana Sundarayya
Goppinti Alludu
Run (2004)
Lakshmi
more
Night At The Museum 2
Robot (Rajinikanth)
Real Steel (Hindi)
Denikaina Ready
Runner Runner
Lovers
Pawn Sacrifice
Mister
The Nun (Telugu)
Kannum Kannum Kollaiyadithaa...
SEARCH MOVIES
Dissatisfied with the results? Report a problem or error, or add a listing.
ADVERTISEMENT
SHOUTBOX!
{{todo.name}}
{{todo.date}}
[
ip{{todo.ip}}
]
{{ todo.summary }}... expand »
{{ todo.text }} « collapse
First  |  Prev  |   1   2  3  {{current_page-1}}  {{current_page}}  {{current_page+1}}  {{last_page-2}}  {{last_page-1}}  {{last_page}}   |  Next  |  Last
{{todos[0].name}}

ADVERTISEMENT
This page was tagged for
Black & White hindi movie
Black & White reviews
release date
Anil Kapoor, Anurag Sinha
theatres list
Follow @fullhyderabad
Follow fullhyd.com on
About Hyderabad
The Hyderabad Community
Improve fullhyd.com
More
Our Other Local Guides
Our other sites
© Copyright 1999-2009 LRR Technologies (Hyderabad), Pvt Ltd. All rights reserved. fullhyd, fullhyderabad, Welcome To The Neighbourhood are trademarks of LRR Technologies (Hyderabad) Pvt Ltd. The textual, graphic, audio and audiovisual material in this site is protected by copyright law. You may not copy, distribute, or use this material except as necessary for your personal, non-commercial use. Any trademarks are the properties of their respective owners. More on Hyderabad, India. Jobs in Hyderabad.