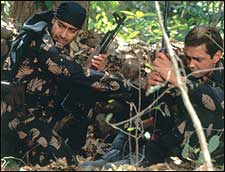 Rohit Murari / fullhyd.com
EDITOR RATING
7.0
Performances
Script
Music/Soundtrack
Visuals
NA
NA
NA
NA
Suggestions
Can watch again
NA
Good for kids
NA
Good for dates
NA
Wait to rent it
NA
Okay. You have had more than your fair share of war movies for the millennium. Should you venture into the theater for this one? One word. YES! All capital Y-E-S. Why? Read on.

Before a poor unsuspecting soul starts expecting the world of this movie, we must, in a manner of speaking, clear the air. The movie is not going to incite any great emotions in you. It is not going to give you that feel of a Sarfarosh or a Border. But it is not going to disappoint you like LOC Kargil, Ab Tumhare Hawale Watan Saathiyo, or any other recent-time movie in this genre did.

Tarun Chuahan call sign Tango Charlie (Bobby Deol) is a Sipahi (the American equivalent is a Private) posted under Hawaldar Mohammed Ali call sign Mike Alpha (Ajay Devgan). The movie is about the journey of these BSF jawans sworn to serving their country. They safeguard our borders, protect the common man from terrorists, and step in when riots spiral beyond police control.

But the movie is not about glorifying wars. In fact, it does not even show a full-fledged battle. It chooses, instead, to highlight little skirmishes between the men of the largest para-military force in the world and groups like BODO, Maoists, Naxalites, etc. It depicts a face of reality that most of us are not even aware of. And this is what works in its favor. Its brute honesty.

Every character in the movie has a purpose. And all actors play their parts extremely well, though Ajay Devgan and Bobby Deol rise above them all. Even Sanjay Dutt (playing Squadron Leader Vikram Rathore) and Suniel Shetty (playing Flight Lieutenant Shezad Khan) linger in your memory for quite some time.

It is a crisp movie. About two hours and twenty minutes in duration, it has no songs that have been put there just to reach the customary 16-reel limit. The four songs that it does have are good, hummable numbers. The script is free of war, even anti-war, rhetoric. The dialogs are just what the everyday person is expected to mouth.

If there is something that can be faulted, it is the choice of civilian outfits that the rustic Tarun dons. But that can always be passed off under dramatic license. Besides, if a movie engrosses you enough to not have to look at your watch even once then such things do not really matter.

There is something to be said of a movie that gets people to clap at the end of it. This one did just that.
Share. Save. Connect.
Tweet
TANGO CHARLIE SNAPSHOT

ADVERTISEMENT
This page was tagged for
tango charlie movie
Tango Charlie
Tango.charlie.hindi.film.
Tango Charlie hindi movie
Tango Charlie reviews
Follow @fullhyderabad
Follow fullhyd.com on
About Hyderabad
The Hyderabad Community
Improve fullhyd.com
More
Our Other Local Guides
Our other sites
© Copyright 1999-2009 LRR Technologies (Hyderabad), Pvt Ltd. All rights reserved. fullhyd, fullhyderabad, Welcome To The Neighbourhood are trademarks of LRR Technologies (Hyderabad) Pvt Ltd. The textual, graphic, audio and audiovisual material in this site is protected by copyright law. You may not copy, distribute, or use this material except as necessary for your personal, non-commercial use. Any trademarks are the properties of their respective owners. More on Hyderabad, India. Jobs in Hyderabad.