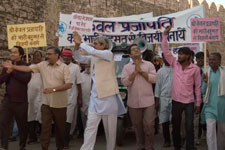 Punarvasu Pendse / fullhyd.com
EDITOR RATING
5.0
Performances
Script
Music/Soundtrack
Visuals
6.0
4.0
5.0
6.0
Suggestions
Can watch again
No
Good for kids
No
Good for dates
No
Wait for OTT
Yes
Socially-conscious entertainers are all the rage in Bollywood for the past few years, as we have seen movie after movie aiming to normalise taboo topics in Indian society by packaging its message within a complete family entertainer. What we haven't seen is a film that drops all the pretence and actually says that it is issued in public interest. Ah well, we learn new things everyday.

Debutant director Jai Basantu Singh is also part of the four-person screenplay writing team of Janhit Mein Jaari, and he makes an attempt to shine a light on a no-no topic - condoms. And the movie is almost entertaining, until it starts to lean heavily onto its social message - it is at this point that it starts to unravel.

Manokamna "Mannu" Tripathi (Nushrratt Bharuccha) is a driven young woman, who wants to be someone before settling down. A chance encounter and some misunderstandings end up pushing her close to Ranjan Prajapati (Anud Singh Dhaka), much to the chagrin of friend and admirer (Paritosh Tripathi). Another chance encounter (and another misunderstanding) leads to Manokamna getting a job as a sales executive/promoter - of a company called Little Umbrella, a manufacturer of condoms.

Unfortunately for Mannu and Ranjan, Ranjan's father Keval Prajapati (Vijay Raaz) is a hot-headed and conservative individual who has very steadfast notions about the honour of his family - and a game of hide and seek begins.

Janhit Mein Jaari starts off brilliantly, giving you plenty of insight into the life of Mannu Tripathi. Her best friend is a guy, and she works in a company that makes condoms - she is confident and thinks for herself. She stands on her own against the patriarch of her family despite not being always backed up by her partner, refusing to back down from a cause she believes in despite pressure from all sides.

The first half of the film is also funny, with plenty of (oftentimes well-written) gags thrown at you - a "friendzoned" guy undermining his own words by his actions (a character, we feel it is important to point out, who does not lash out and still maintains a good friendship with her while acknowledging his own emotions), the blind grandfather whose disability creates humour but not at his expense, the lead character slyly suggesting that she wanted to combine her "Mano" and his "Ranjan" for some late night "manoranjan" (entertainment), or many of the lines dished out by Ranjan's brothers and their wives.

The second half is when the film begins to falter, when the heavy-handedness with which it tackles its social message starts to bear down on the audience. It takes over a hundred minutes for the cold war between Manokamna and Keval Prajapati to resolve itself - and only because an element in the family gets involved. Its message seems to be diluted by its own overbearing adversary. Mannu's reason for her job becoming her passion also feels very rushed, and a certain character's misfortunes are used as a plot driver without putting any thought into her situation. Ultimately, Janhit Mein Jaari ends up feeling like an open-ended stage production - one that has multiple disjointed sketches that only loosely have a common thread.

Nushrratt Bharuccha is the star of the show, and the film puts her front and centre in every frame she occupies. It is refreshing to see a women's empowerment film that discards the male saviour stereotype, and is only focussed on the lead character's actions. Unfortunately for Janhit Mein Jaari, its other characters are one-dimensional, which is especially jarring when a veteran actor such as Vijay Raaz is made to portray one. Newcomer Anud Singh Dhaka tries to do whatever he can with a feckless character, but his character's relationship with Bharuccha's Mannu fails to feel realistic in the second half.

A long list of artists have provided the music for Janhit Mein Jaari, but nothing particularly stands out. Aman Pant's score is also strictly satisfactory - you get the same corny background sounds that you are so used to from Hindi cinema.

We would like to say that we appreciate the message Janhit Mein Jaari has to offer, but we really wish it was more nuanced. Sadly, we get an end product where the lead character breaks the fourth wall as herself, not even as her character - talk about being literal - to actually deliver a public service announcement. 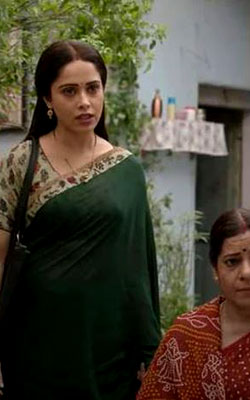 ADVERTISEMENT
This page was tagged for
Janhit Mein Jaari hindi movie
Janhit Mein Jaari reviews
release date
Nushrratt Bharuccha, Anud Singh Dhaka
theatres list
Follow @fullhyderabad
Follow fullhyd.com on
About Hyderabad
The Hyderabad Community
Improve fullhyd.com
More
Our Other Local Guides
Our other sites
© Copyright 1999-2009 LRR Technologies (Hyderabad), Pvt Ltd. All rights reserved. fullhyd, fullhyderabad, Welcome To The Neighbourhood are trademarks of LRR Technologies (Hyderabad) Pvt Ltd. The textual, graphic, audio and audiovisual material in this site is protected by copyright law. You may not copy, distribute, or use this material except as necessary for your personal, non-commercial use. Any trademarks are the properties of their respective owners. More on Hyderabad, India. Jobs in Hyderabad.