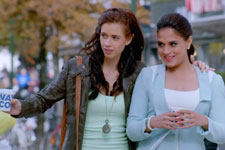 T J Reddy / fullhyd.com
EDITOR RATING
2.5
Performances
Script
Music/Soundtrack
Visuals
2.0
2.0
3.0
7.0
Suggestions
Can watch again
No
Good for kids
No
Good for dates
No
Wait for OTT
Yes
Movies like Jia Aur Jia make me sad. They make me sad because I am one of those D-bag film goers who never fail to whine and moan about women not being represented well in film. I write my reviews and complain that the other gender is mostly one-note and used as eye candy in films that preach feminism but choose to not practice their preachings. And yes, sooner or later, bolstered by the changing times and the power of collective whinging, we do get female-led films.

Vidya Balan all but cornered the market on all the half-decent roles written for women in their late 20s to late 30s, but there is a distinct lack of thought put into exploring younger women. Women in their teens or early 20s are rarely given the in-depth look they sorely deserve as they're usually pigeonholed into roles showcasing aspiring rock star / party girl who smokes and drinks while showing the finger to society or downtrodden delicate flower who has been trampled upon one too many times by society's many vices. While women who match these tropes do exist, they are but tropes and not three-dimensional characters. And what you need in an over 90-minute film with no plot to speak of is characters to relate to. This double-homogenised version of Eat, Pray, Love (which was toothless to begin with) is anything but relatable.

On the one hand we have Sita... um, Jia (Richa Chadda) who is an introvert. The yang to her yin is Geeta... damn it, Jia (Kalki Koechlin), a smoking, free-spirited, flash-mob-creating female your conservative parents tell you to avoid at all costs. Simply put, one Jia eats mutton biryani and the other eats majjiga annam (curd rice). Stick to these character descriptions, though, because you'd be hard-pressed to write more than a half sentence about two women who inhabit almost every frame as glossy as for Swedish tourism.

Having not heard of Airbnb or Skyscanner or the many wonders modern technology has to offer, Jia and Jia embark on something called a "twin-sharing" trip to explore Scandinavia. On a sidebar, someone write this "twin-sharing" idea down and pitch it on Shark Tank. Coming back to the non-millionaires, they aimlessly wander around Sweden attending random rock shows which one Jia resents and the other relishes. Jia Koechlin relishes it so much that she will be smitten down by liver cancer within a week. See what happens when you partake in alcohol consumption you crazy kids, you end up in horrible stories.

So with one Jia dying on the outside, the other dying on the inside and your interest in the film dying with each passing second, the movie continues its exercise in tedium, somewhat convinced that it has something important to say about the human condition. The film's themes are so overbearing that the fact that the two Jias are two symbolic parts of every person where the happy part dies with liver cancer "supposedly" whereas the sadness is what is left behind was not going to be lost on your 6-year-old nephew.

To paraphrase one of my favourite writers, this movie complains about the fact that it has nothing to complain about, hoping against hope that someone will consider its barebones story which has such little material, to be edgy.

Excellent actresses Kalki Koechlin and Richa Chadda are reduced to caricatures. Newcomer Arslan Goni who is in love with one of the Jias (you know which one) is extremely green as an actor. The lesser said about the music the better. Sweden still looks good, though.

Cycling back to line 1, Jia Aur Jia makes me you because we as a community know how hard it is to get finance for, produce, write and direct a female-led movie. Keyboard warriors can vent their frustrations in all-caps, but they don't have the money to finance a film when push comes to shove. So when an all-female film where the focus is not on salaciously clad babes but on character drama is green lit, the characters and their drama need to be intriguing - for every mediocre lady-centric movie with an occupancy of seven people in a hall, 10 more are shot down citing the former's middling numbers.

But then again, as a community, we need to ask ourselves - why is it that female-led movies suffer such a fate? Many hero-centric action, comedy, drama and horror movies tank every year but their funding rarely ceases. Maybe female-centric cinema is still a niche market, and so quality becomes key to recoup investments. And maybe the amount of thought I've put into the acceptance of this brand of cinema in this 900-word review is more than the filmmakers put into a 120-page script.
Share. Save. Connect.
Tweet
JIA AUR JIA SNAPSHOT 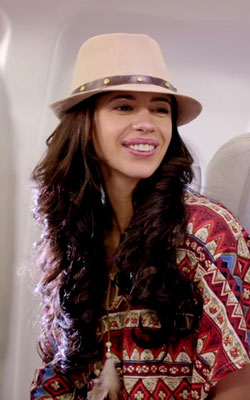 See Jia Aur Jia full details
JIA AUR JIA USER REVIEWS
1 - 1 OF 1 COMMENTS
POSITIVE  |  NEGATIVE |  NEWEST  |  OLDEST  |  MOST HELPFUL  |  LEAST HELPFUL
The Common Movie Goer on 29th Oct 2017, 4:21pm | Permalink
"And maybe the amount of thought I've put into the acceptance of this brand of cinema in this 900-word review is more than the filmmakers put into a 120-page script."

Saddened to read this poignant sentence. I wonder how these movies get green lit. I know it takes a ton of effort to make anything. The actors, producers, cinematographer, etc. put in a lot of mental and physical effort. I wonder how disheartened they feel when they see such poor reception for their movies. It doesn't help that one dud and actresses find it almost impossible to make a comeback to commercial movies, especially without a Godfather (who are generally the Harvey Weinsteins of the world).
TJ Reddy on 29th Oct 2017, 5:50pm | Permalink
It takes an inhuman amount of effort to get a film greenlit TCMG. There was this old timey producer in Hollywood who used to give a standing ovation to every film he watched because he understood the pain that went into producing it.

I find no pleasure in writing scathing reviews except for the fact that my jokes are a lot sharper. It's just that character actresses have a hard time with their brand of cinema in the Indian market. The film's need to be good to stand the test of time. Both women in this film will bounce back because they are bankable but the director himself becomes a liability now because he is the scapegoat of the whole affair.

The niche film market is a vicious world indeed but this film needed to be less cliche. I want to see a free spirited high powered business woman who does it because she wants to and that makes her happy instead of saying smoking makes you a free soul.
The Common Movie Goer on 30th Oct 2017, 4:58am | Permalink
Oh, no. I actually side with you on this one. I wholeheartedly believe that we, as the consumers, have the right to review movies. I base all my purchase decisions off of Amazon/Flipkart/YT reviews. I don't see any issues with scathing reviews. It helps me avoid spending time and money on duds like J&J and Geostorm.

The thing with the NTR-reviewer controversy is that it was totally blown out of proportion. NTR said *some* reviewers, and I think he was referring to people like Jeevi and 123Telugu. Totally senseless rating system and reviews. Worse still, I somehow feel they are trying to represent all of the viewers when they express their opinion. It doesn't come across like an individual expressing his opinion. Also, at some level, I think NTR spoke in the heat of the moment. All the reviewers praised him to the skies in the acting department (wholly deserved), but they bashed on the story. Maybe he was afraid that his work would go unrecognized.

I am glad Jai Lava Kusa was a big hit. I thoroughly enjoyed the film, and felt it was the best Telugu movie since Dhruva. But I also understood why critical reviewers felt it was run-of-the-mill stuff. At the same time, I loathed and despised Arjun Reddy with a vengeance, but understood why reviewers found it novel.
The Common Movie Goer on 30th Oct 2017, 5:00am | Permalink
Oops. I totally forgot about Khaidi 150, Gautami Putra, and DJ that also released this year. I actually liked them better than JLK. My bad.
TJ Reddy on 30th Oct 2017, 9:34am | Permalink
I totally concur TCMG. Even though movies are art they are a multi-billion dollar business too. At the end of the day, even though I love McDonald's fries, I would still be unsatisfied if it tasted horrible tomorrow. The same applies to movies as well. I don't let blind fandom overshadow quality because my favorite actor thinks otherwise. Sometimes, herd mentality is what drives their egos up to the point where they buy into their own bullshit.

Jeevi's reviews are the blandest and most brand-safe ones you can find because of how this site works. By the looks of things, their site is used for a lot of promotional material and that generates revenue. Bad reviews to big star movies mean they lose the content and in turn revenue so they do their 3/5 for every movie.The safest number.

From my end though, I love the fact that I'm allowed to analyze and express more than just talking about the most superficial elements. It aids in me having conversations about ideas and opinions with people like you which aids in us appreciating the medium so much more.

That being said. Jai Lava Kusa was average for me for that needlessly long first half. NTR was the best part by a mile.

Dhruva is just a god awful movie in my book by how stupid it is after calling itself a smart movie. Like the hero wears no protective gear when sleuthing, the villain doesn't clean up a crime scene where people come to work the next day etc. Because it called itself smart I looked into it deeper so it pissed me off so much more.

I liked Arjun Reddy for its fresh ideas and some unique filmmaking techniques but that horrid ending and some points in the movie undercut all its supposed "modern" sentimentalities. its a 6/10 for me.

ADVERTISEMENT
This page was tagged for
Jia Aur Jia hindi movie
Jia Aur Jia reviews
release date
Kalki Koechlin, Richa Chadda
theatres list
Follow @fullhyderabad
Follow fullhyd.com on
About Hyderabad
The Hyderabad Community
Improve fullhyd.com
More
Our Other Local Guides
Our other sites
© Copyright 1999-2009 LRR Technologies (Hyderabad), Pvt Ltd. All rights reserved. fullhyd, fullhyderabad, Welcome To The Neighbourhood are trademarks of LRR Technologies (Hyderabad) Pvt Ltd. The textual, graphic, audio and audiovisual material in this site is protected by copyright law. You may not copy, distribute, or use this material except as necessary for your personal, non-commercial use. Any trademarks are the properties of their respective owners. More on Hyderabad, India. Jobs in Hyderabad.