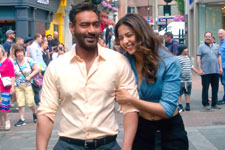 Punarvasu Pendse / fullhyd.com
EDITOR RATING
4.5
Performances
Script
Music/Soundtrack
Visuals
6.0
4.0
5.0
6.0
Suggestions
Can watch again
No
Good for kids
No
Good for dates
Yes
Wait to rent it
Yes
It's a refreshing change to see your average Bollywood action hero play a role that requires a much more subtle portrayal. And it is also quite funny that the man Ajay Devgn plays in De De Pyaar De would not be seen watching any of his action movies like Singham. The movie even makes fun of this fact, playing the familiar Singham music in a scene which is the complete antithesis of everything Singham stands for.

De De Pyaar De starts off as a sexy, fun May-December romance. Rich 50-year-old Ashish (Ajay Devgn) meets the 26-year-old Ayesha (Rakul Preet Singh) at a friend's bachelor party in London. Sparks fly, and Ashish decides to introduce his young girlfriend to his family in India - his ex-wife Manju (Tabu), and his children who are almost Ayesha's age.

Shenanigans ensue when the duo reaches India, though, as the two women clash in order to secure Ashish's affections. Adding to this mayhem is the fact that his daughter resents him, and his son has crush on Ayesha. Factor in a neighbour (Jimmy Shergill) who is interested in Manju, and you are set for a comic caper that slowly threatens to unravel multiple relationships.

De De Pyaar De tries to destigmatize marital separation, and puts forward the argument that a marriage ending doesn't mean that relations cease to exist. That is perhaps the only thing going for this film - it manages to put forth its message without sounding preachy or condescending.

Sadly, this cannot offset the glaring issues with the movie. Misogyny is a running theme - the older woman Manju is compared to an old car in one scene. And while Ashish being old is made fun of by his young girlfriend throughout the movie in a mostly tongue-in-cheek manner, her quips on Manju's age appear downright obnoxious. The film is written and produced by Luv Ranjan, who has a reputation for his misogynistic scripts, and features Alok Nath who has been accused of rape in real life - which doesn't quite make for a pleasant experience.

Ajay Devgn, for once, plays a character his own age. Not only that, he plays a character that shows none of the bravado that is endemic to the ones he usually portrays. A welcome change, even if he looks a tad bored throughout the film.

Rakul Preet Singh is a breath of fresh air, though she does overdo it. Tabu is easily the best performer out of the bunch - she dwarves everyone else whenever she is in the frame. A master at underplaying emotions, she singularly makes the movie appear more interesting. Jimmy Shergill makes yet another comic appearance, and is very underutilised. Javed Jaffrey is irritating as Devgn's friend/therapist, and keeps harping on about medical degree.

None of the tracks in De De Pyaar De is particularly memorable, save Arijit Singh crooning "Dil Royi Jaye". The background music gives added depth to many moments in the film, but is a bit on the loud side.

De De Pyaar De gets uncomfortably caught trying to sprinkle in some traditional, moralistic values in a film that is outwardly very "modern". Despite the polish and the production value, this is in essence a movie that is reminiscent of older, tackier, turn-of-the-century comedies that were more problematic than entertaining.
Share. Save. Connect.
Tweet
DE DE PYAAR DE SNAPSHOT 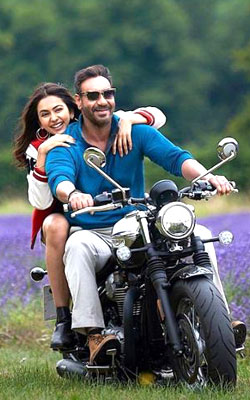 ADVERTISEMENT
This page was tagged for
de de pyar de movie review fullhyderabad
De De Pyaar De hindi movie
De De Pyaar De reviews
release date
Ajay Devgn, Tabu
Follow @fullhyderabad
Follow fullhyd.com on
About Hyderabad
The Hyderabad Community
Improve fullhyd.com
More
Our Other Local Guides
Our other sites
© Copyright 1999-2009 LRR Technologies (Hyderabad), Pvt Ltd. All rights reserved. fullhyd, fullhyderabad, Welcome To The Neighbourhood are trademarks of LRR Technologies (Hyderabad) Pvt Ltd. The textual, graphic, audio and audiovisual material in this site is protected by copyright law. You may not copy, distribute, or use this material except as necessary for your personal, non-commercial use. Any trademarks are the properties of their respective owners. More on Hyderabad, India. Jobs in Hyderabad.