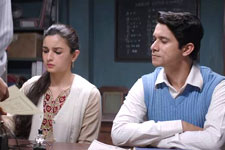 Veturi Sarma / fullhyd.com
EDITOR RATING
6.0
Performances
Script
Music/Soundtrack
Visuals
7.0
6.0
8.0
8.0
Suggestions
Can watch again
No
Good for kids
Yes
Good for dates
Yes
Wait for OTT
Yes
The year is 1971 and the Indo-Pak border isn't patrolled as rigorously as it is now. It is scarcely believable that the border was as porous as shown in the movie, but apparently those times existed. Pakistan is struggling with civil war with its eastern part of wanting independence, and India coming to the latter's aid. To deter India Pakistan is planning an attack, but the Indian intelligence doesn't know the specifics.

An Indian intelligence Official Hidayat Khan (Rajit Kapoor) gets his daughter Sehmat Khan (Alia Bhatt) wedded to the son Iqbal Syed (Vicky Kaushal) of Brigadier and family friend Syed (Shishir Sharma), to spy on Pakistan. His colleague Khalid Mir (Jaideep Ahlawat) tries to talk to him out of it, but the father-daughter duo is determined to see it through.

Sehmat receives training on Morse Code, shooting and hand-to-hand combat in preparation to be the bahu-spy. Suprisingly no one at the marital home suspects her except the domestic help Abdul (Arif Zakaria), incidentally an Indian who chose Pakistan during partition. In the absence of a mother-in-law (a curious choice of writing, forgiven since the film is based on a true story Calling Sehmat by Harinder Sikka), Abdul becomes the only roadblock for her. She gets him out of her way in a poignant moment in the narrative, and from there it all gets repetitive and goes downhill.

The premise of Raazi is brimming with potential for drama, and yet it is quite surprising how easy the script makes the spying for Sehmat. Access to important documents and officials is almost a cinch, and the Pakistan police and army look like trainee forces. It seems redundant to waste so much of screen time on making the film suspenseful when all that suspense amounts to predictable outcomes.

The relationships at the in-laws' home are also dealt in a matter-of-fact way, with the movie resorting to clichés when nurturing the relationship between the married couple is the order of the day. As a result the husband's side of the narrative looks undercooked with the family left with nothing to do as Sehmat maneuvers her way through the household and Pakistan without anyone raising any eyebrows.

The script is well written in parts with a few very good twists and great dialogue, yet sometimes it doesn't follow the rules it itself sets for its world. For instance, Sehmat is instructed not to contact the Intelligence Bureau from unknown channels, and yet she calls them from random telephones. That sort of lazy writing ensures that the film never realizes the dramatic potential the script had on offer. Also, as mentioned, the writers are also surprisingly reluctant in developing the relationship between the lead pair, and hence the denouement doesn't quite have the impact it could have.

Alia Bhatt looks suitably diminutive for the stakes to appear massive, and she is easy for anyone to warm up to, but she isn't directed well here, and frequently gives in to excesses. The nostril-flaring sobs appear to be her standard reaction for any situation she finds herself in. Not only is it grating, it also robs the film, and the lead Vicky Kaushal, of its most poignant moment when the husband learns about his wife's betrayal - Kaushal's tears lose their impact since Bhatt has already shed a gallon by then.

Jaideep Ahlawat is excellent as intelligence head Khalid Mir. In a film where the characters tend to get idealistic time and again, his character provides the much needed perspective on war.

Shankar-Ehsaan-Loy's music fits the narrative well, and it won't be a surprise if Ae Watan gets to be a fixture in Independence Day special programs in the coming years. Pakistan has been rendered well, and Jai Patel's cinematography combined with the production design is quite evocative of the era.

The loss of innocence during the times of war is an important theme that pervades the movie, but despite the competent filmmaking all over you can't shake off the feeling that this could have been a better film. It is compelling at times, but the whole is a lot lesser than the sum of its parts.
Share. Save. Connect.
Tweet
RAAZI SNAPSHOT 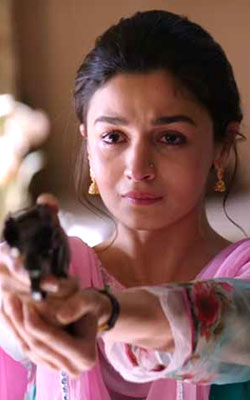 ADVERTISEMENT
This page was tagged for
Raazi hindi movie
Raazi hindi movie
Raazi reviews
release date
Alia Bhatt, Vicky Kaushal
Follow @fullhyderabad
Follow fullhyd.com on
About Hyderabad
The Hyderabad Community
Improve fullhyd.com
More
Our Other Local Guides
Our other sites
© Copyright 1999-2009 LRR Technologies (Hyderabad), Pvt Ltd. All rights reserved. fullhyd, fullhyderabad, Welcome To The Neighbourhood are trademarks of LRR Technologies (Hyderabad) Pvt Ltd. The textual, graphic, audio and audiovisual material in this site is protected by copyright law. You may not copy, distribute, or use this material except as necessary for your personal, non-commercial use. Any trademarks are the properties of their respective owners. More on Hyderabad, India. Jobs in Hyderabad.