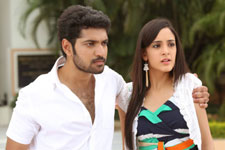 Ravi Kandala / fullhyd.com
EDITOR RATING
2.0
Performances
Script
Music/Soundtrack
Visuals
3.0
2.0
2.0
2.0
Suggestions
Can watch again
No
Good for kids
No
Good for dates
No
Wait for OTT
No
We found out something after watching Tippu that could send the entire youth of the nation into a tizzy. Apparently in every women's college in this country, four percent seats are reserved for men. Yes, you read that right - it means that in a girls-only institution with 100 students, it is compulsory that four be boys. Now which boy wouldn't want to join such a college?

Our hero Karthik Krishna (Satya Karthik) is in one such college, and is the only guy amongst a thousand girls. This is the cue for the director to organize a Kabaddi game and give the front benchers some sleaze. Karthik joins this college as he is in love with Vaishnavi (Kanika Kapoor). Kanika, on the other hand, is the object of affection for a goon Keshubhai (Shravan).

Karthik beats up Keshu's goons one fine day, and presto - Vaishnavi professes undying love for him. The next time the goons turn up with Keshu himself in tow, and Karthik proceeds to bash him up, too. Keshu is then insulted and castrated by eunuchs, and commits suicide unable to bear the insult. His brother Haribhai then swears revenge.

What happens next? Is there a flashback involving Karthik's best friend here? Will Karthik succeed in ending Haribhai's reign? How many meaningless subplots can the director insert in between? Are these the roles we'll remember M S Narayana by? Will Krishna Bhagawan come out of the vicious circle of sleazeball comedy he's gotten himself into? For answers to these and more questions, you'll need to hunt for someone who watched this movie and survived.

Tippu is a movie made with utmost care ...to ensure that every cliché is followed without the slightest deviation. The hero is introduced with a fight where he beats up twenty goons. The heroine is introduced in a scene where she plays a good Samaritan and saves someone's life making the hero fall for her instantly. A random character looks at the heroine and remarks "where is the guy who will claim her hand?", and the hero's introduction song starts off. We could fill up the next 24 pages with these, but you get the idea.

Acting-wise Satya Karthik is like an over-enthusiastic child. You know how kids babble and words run over one another when they are just learning to speak? That's also Satya Karthik's dialogue delivery style. He's tall and has a good voice, but acting is a fair distance away. The heroine is the perfect example for something we read recently - an alabaster automation. Except for her exceptionally fair skin, Kanika Kapoor is no heroine material by any standards. The supporting cast overact as if they are compensating for the leads.

Two movies this week introduced sons of producers, and both were amongst the worst this reviewer's ever watched. But for the fact that Tippu is set in Mysore, there is no novelty in it, and you would do well to stay home and watch India play Bangladesh - there's going to be more drama there for sure.
Share. Save. Connect.
Tweet
TIPPU SNAPSHOT 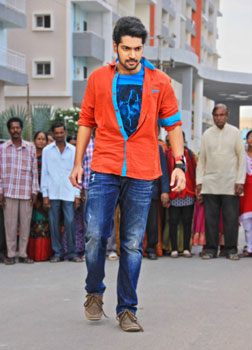 ADVERTISEMENT
This page was tagged for
Presto kalipindi
Tippu telugu movie
Tippu reviews
release date
Satya Karthik, Kanika Kapoor
Follow @fullhyderabad
Follow fullhyd.com on
About Hyderabad
The Hyderabad Community
Improve fullhyd.com
More
Our Other Local Guides
Our other sites
© Copyright 1999-2009 LRR Technologies (Hyderabad), Pvt Ltd. All rights reserved. fullhyd, fullhyderabad, Welcome To The Neighbourhood are trademarks of LRR Technologies (Hyderabad) Pvt Ltd. The textual, graphic, audio and audiovisual material in this site is protected by copyright law. You may not copy, distribute, or use this material except as necessary for your personal, non-commercial use. Any trademarks are the properties of their respective owners. More on Hyderabad, India. Jobs in Hyderabad.