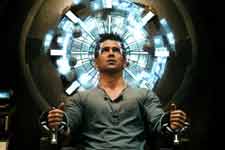 Nupur Barua / fullhyd.com
EDITOR RATING
6.0
Performances
Script
Music/Soundtrack
Visuals
5.0
6.0
5.0
8.0
Suggestions
Can watch again
Yes
Good for kids
No
Good for dates
No
Wait for OTT
No
When Philip K Dick first published his short story, "We Can Remember It For You Wholesale", in 1966, little did he know that it would one day become the basis for an entire feature film - not once, but twice - although both films are very loose adaptations.

The concept of memory-erasing and replacement has become a bit outdated, and Len Wiseman takes a risk with a remake of a cult movie of the '90s - but remember, he was the man who presented the clichéd vampires and werewolves in an entirely different light, too (in the Underworld series). So a fresh take, and some dizzy visuals are what you should expect from Total Recall, the remake.

By the end of the 21st century, which is the period that this movie is set in, Earth has become uninhabitable, thanks largely due to global chemical warfare. Space is the rarest and most wanted commodity, and the only populated areas are the Federal Republic of Britain (FRB), and the Colony (Australia). Workers commute between the two regions, within a few minutes, in a shuttle that shoots through the underbelly of Earth. Cohaagen (Bryan Cranston), a corporate leader of the developed world, and Mathias (Bill Nighy), the leader of the Euromerican rebels, are always in the news for their face-offs.

One ordinary citizen at the cramped and overpopulated Colony is Douglas Quaid (Colin Farrell), who shares a post-apocalyptic apartment with his wife Lori (Kate Beckinsale). He travels to the FRB every day, to work as an engineer. His life is dull, although he has these vivid recurring dreams in which he is separated from a mysterious woman (not his wife) by the police force.

Trying to find out more, Douglas visits Rekall, an organisation that claims to implant memories in you, to make your life more exciting. He meets with Mac (John Cho), the person who will implant false memories of a heroic life, and becomes confused and uncomfortable with the questions the latter asks. Before the process is completed, however, the memory parlour is attacked by the cops. Soon, life is a roller-coaster ride for Douglas as he first tries to figure out who he really is, and then what his purpose in life is.

The story itself is not very compelling, and there is nothing that we have not seen before - conspiracy theories, false identities, memory lapses resulting from brain tampering, fancy computer screens, flying vehicles, a love triangle - in short, every element that a good science-fiction tale must have. Hero loses memory, hero finds memory, hero makes good. What is credible, though, is the screenplay structure. It is predictable, yes, but it is two hours of balanced emotion, action, romance, drama, tragedy and triumph (actually, there is an overdose of the action, but it works).

The real hero of the movie is the production design, which not only pays tribute to the original Arnold Schwarzenegger flick, but also presents a convincing landscape of a decayed yet modern post-apocalyptic world without making it too fantastical. So there is the three-breasted prostitute, a cell-phone inlaid in the palm, and houses that are stacked precariously on top of one another. The Colony is a fresh version of the water canals of Thailand, and streets of Japan and Hong Kong, and the FRB is almost New York, with hover cars.

The computer graphics only add to the production design, and are stunning, to say the least - which is another way of saying that they are believable. The makers could have paid more attention to the props and the costumes, though. The guns look ridiculous, and the clothes worn by the actors are very 1990s - surely fashion will have seen a sea of change in the last few years of this century? The police uniform is a better version of the Robo Cop armour, but very unoriginal.

Colin Farrell is a better actor than Arnold Schwarzenegger, which is not saying much, but he makes his character more human. He also seems fitter than earlier, and has more than enough screen time to show that off.

Kate Beckinsale snarls a lot, and with her clothes, looks like she is still in her Selena (from the Underworld series) mode. For somebody who is almost 40, however, she kicks a mean punch, and looks great while doing it.

Jessica Biel is also a treat to the eyes, as far as the action sequences are concerned. She plays the most vulnerable character in the film - one who needs protecting.

Bill Nighy looks confused throughout, probably because he cannot understand where the movie is going. Bryan Cranston does his bit as the villain.

There are moments when the film drags and Colin Farrell looks more comfortable in a hospital bed than in fast cars; and, as mentioned earlier, the plot is entirely predictable - but it is worth a watch, especially for the chase sequence between Kate Beckinsale and Colin Farrell (there are a few of those, but the first one is almost breathtaking).
Share. Save. Connect.
Tweet
TOTAL RECALL (HINDI) SNAPSHOT 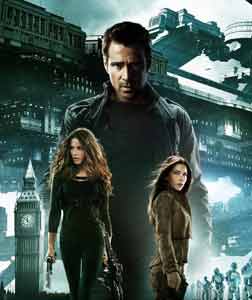 ADVERTISEMENT
This page was tagged for
Total recall full movie download filmyzila
filmyzilla total recall Hollywood Hindi movie full
total recall movie hd in hindi
Total Recall movie Hindi dubbed Download Filmyzilla
total recall hindi dubbed movie download filmyzilla
Follow @fullhyderabad
Follow fullhyd.com on
About Hyderabad
The Hyderabad Community
Improve fullhyd.com
More
Our Other Local Guides
Our other sites
© Copyright 1999-2009 LRR Technologies (Hyderabad), Pvt Ltd. All rights reserved. fullhyd, fullhyderabad, Welcome To The Neighbourhood are trademarks of LRR Technologies (Hyderabad) Pvt Ltd. The textual, graphic, audio and audiovisual material in this site is protected by copyright law. You may not copy, distribute, or use this material except as necessary for your personal, non-commercial use. Any trademarks are the properties of their respective owners. More on Hyderabad, India. Jobs in Hyderabad.