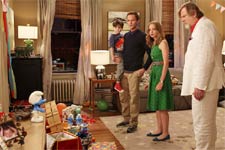 Neha Mathur / fullhyd.com
EDITOR RATING
6.0
Performances
Script
Music/Soundtrack
Visuals
5.0
5.0
6.0
7.0
Suggestions
Can watch again
No
Good for kids
Yes
Good for dates
No
Wait for OTT
No
The wee little creatures are back in town, and, yes, they are still "three apples high" and as blue as, well, Smurf blue. For the uninitiated, Smurfs (originally crafted by Belgian strip cartoon artist Peyo) are tiny, gnome-like, magical beings which have delightful red-topped mushrooms for houses and share an idyllic, self-sustaining village hidden from the rest of humanity. Each Smurf's name corresponds (miraculously) with his persona and his vocation. Totalitarian, you say? No, no, they are as jolly as blue folk can be.

Director Raja Gosnell returns with the second installment of a purported Smurf trilogy, and renders family fun of a passable variety, unremarkable and somewhat preachy. The film centres on Smurfette's identity crisis, triggered by her birthday, and attempts to engage with a larger philosophical preoccupation, i. e., does evil beget evil?

Originally created by the loathsome wizard, Gargamel (for his own evil designs), the little blonde Smurfette (Katy Perry) suffers from an "outsider complex" (we just made up that term), and fears that she will prove to be her creator's true offspring.

What ultimately happens with Smurfette is for you to discover, but it is safe to say that, more often than not, the slackness of the creator, Raja Gosnell in this case, has a direct effect on the characters that he conjures.

The story takes off with the kidnapping of Smurfette by one of Gargamel's two "naughties" (his prototypes for a race of magically-engineered Smurfs who will serve as his slaves), namely, Vexy (Christina Ricci) and Hackus (J B Smoove). Vexy and Hackus are colourless copies of the Smurfs, without their magic essence.

In a bid at world domination, Gargamel coerces and then bribes Smurfette to give up Papa Smurf's spell that will transform "naughties" into "real" smurfs.

Paris, that "cheese-infested metropolis", as Gargamel deplores, serves as the setting for the action that unfolds. Papa Smurf and his B-Team, along with their human family, Patrick (Neil Patrick Harris) and Grace (Jayma Mays), their boy and a spunky grandfather (Brendan Gleeson) - phew - concoct a rescue plan. The rest is a whirlwind of little blue people flying across the streets of Paris, in and out of the sewers, and a lot of talk of "family".

Family is the mainstay of The Smurfs 2. Who is a good parent? Who is a good child? Is family bound merely by blood? Do our origins dictate our deeds? And so on. Wholesome fare for all involved.

And yet, there are instances where one feels discomfort. Gargamel torturing the Smurfs is made light of, as comedy is thrown about while this happens.

The humour may distract youngsters from the dark undertones, but it seems to both trivialize and fetishise the very real presence of torture in our world. Yes, yes, this is a children's film. But that is precisely why it is worrying.

Despite the gags that sometimes fall flat, kids will enjoy this one because both the comic timing and the jokes are childish. The slapstick hammering that Gargamel receives is something out of the Home Alone series, wherein menacing villains are reduced to blubbering idiots.

Hank Azaria, as the foul wizard, immerses himself into the character of the incompetent bad guy, and as in the first film, manages to pulls it off here as well.

Gargamel gets a new angle as the narcissistic celebrity, and his demand to be worshipped by fawning fans is a satirical reference to the perils of real-life fame.

Neil Patrick Harris gets no new angles as Patrick, and is staid and uninspiring. Brendan Gleeson, on the other hand, as Patrick's stepfather, injects life into the proceedings, and keeps the screen lively.

George Lopez, Katy Perry, J B Smoove, Christina Ricci, and Jonathan Winters give as much life as they can to their respective animated characters.

Live-action and computer generated animation come together in The Smurfs 2, without any obvious interruptions or glitches. In one scene, the Roue de Paris, a gigantic giant wheel, motors through the city, missing tourists and locals by a hair's breadth. The 3D lends to the film both a sense of adventure and pace.

The Smurfs 2 is meant for the kiddies. You might yawn, but you can call yourself a good parent if you take your little Smurfs to this one.
Share. Save. Connect.
Tweet
THE SMURFS 2 (3D) SNAPSHOT 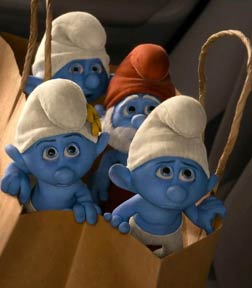 ADVERTISEMENT
This page was tagged for
the smurfs 2 full movie
The Smurfs 2 (3D) english movie
The Smurfs 2 (3D) reviews
release date
Hank Azaria, Neil Patrick Harris
Follow @fullhyderabad
Follow fullhyd.com on
About Hyderabad
The Hyderabad Community
Improve fullhyd.com
More
Our Other Local Guides
Our other sites
© Copyright 1999-2009 LRR Technologies (Hyderabad), Pvt Ltd. All rights reserved. fullhyd, fullhyderabad, Welcome To The Neighbourhood are trademarks of LRR Technologies (Hyderabad) Pvt Ltd. The textual, graphic, audio and audiovisual material in this site is protected by copyright law. You may not copy, distribute, or use this material except as necessary for your personal, non-commercial use. Any trademarks are the properties of their respective owners. More on Hyderabad, India. Jobs in Hyderabad.