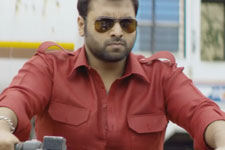 Ajay Kumar R / fullhyd.com
EDITOR RATING
7.0
Performances
Script
Music/Soundtrack
Visuals
8.0
8.0
8.0
5.0
Suggestions
Can watch again
Yes
Good for kids
No
Good for dates
Yes
Wait for OTT
No
We had recently described Ram Gopal Varma's political-thriller Vangaveeti as another of the director's increasingly unabashed attempts at promoting himself as an ardent adorer of mafia kingpins and their blood-soaked sagas. Few of his attempts in the recent past, however, have come close to capturing the gravitas of his earlier works in the genre. And for his increasingly disillusioned fans, young director Sagar K Chandra may be just what the doctor ordered.

Raju (Sree Vishnu), a.k.a. Railway Raju, is a budding batsman who aims to some day play international cricket. His sister elopes with a Maoist leader (the film doesn't fear using political emblems boldly) before the events of the movie, and actively works against the government. And the police of many districts in the state are hunting for the militant faction.

Special police officer Imtiaz (Nara Rohit), who is assigned the task of bringing Raju's sister and her gang down, hates Naxalites and Maoists to the core due to a personal grudge he holds against them. He paints even the kith and kin of the rebels with the same broad brush - and that includes Raju, who faces Imtiaz's torture and interrogation often. The honest cop doesn't shy away from killing even those factionists or their sympathizers (and villagers) who have never been involved actively in any crime or anti-government activities.

To add to Raju's woes, he shows his batting skills in the wrong way when he kills local don Baghawan Das (G V Sudhakar Naidu) in a single stroke (a rather tense moment shot in slow motion), unintentionally. This incident strengthens Imtiaz's preconceived notions about Maoists, and he nabs Raju and traumatizes him in prison in order to extract intel, and then ensnares Raju in a situation that ends up ruining the latter's aspirations.

The seeds of hatred against the establishment are now sown deep inside the talented cricket player's heart as his imprisonment and his sister's death affects all other parts of his life and family. He sets out to seek vengeance against Imtiaz, and in a dramatic turn of events, "Railway Raju" becomes a dreaded name. How the name is perceived and what happens to its bearer and his next generation form the crux of the tale.

Bringing back the Vangaveeti comparison, Chandra does what Varma wishes to do - decode the origins and persona of factionists and other anti-social elements, and give a practical insight into them. But instead of sympathizing with or glorifying them, like how RGV may do, Chandra lets the viewer be the judge. Raju may be a victim of a system that demonizes anyone even remotely related to militants, but what he does when he gets an opportunity to redeem himself is entirely up to him, is how Chandra portrays it.

So just when you think that Raju is slowly becoming a Maoist and will seek revenge against the system, he instead becomes a corrupt business magnate and gets involved in a spate of gang wars, propelled by ego. He dreams smaller and doesn't mess with Imtiaz or the police department. And the cops aren't scrutinized for their encounters of Maoists, and the Maoists (or Raju) aren't victimized for being on the other side of the gun. Also, Imtiaz is the genesis of everything that happens in Raju's life, but isn't the embodiment of evil. Thus, the story deals, quite wisely, with the fact that the main characters are several shades of gray, leaving you to think for yourself.

The deep excavation of a gangster's psychology and the myriad twists and turns (which are mostly due to unexpected chaotic events) nevertheless make this one a gripping perspective that keeps you engaged. The movie has gore and violence, too, but doesn't go overboard, keeping much of your focus on the chilling account and the anatomy of personas.

Sree Vishnu's Raju, with all his innocence at first and murderous rage later, complements (and at times empowers) the direction and storyline. He gradually becomes someone you empathize with, but also makes you want to give him a piece of your mind. You also get to see some excellent emoting towards the end, where he expresses his undying passion for cricket and how he reconciles with life after something shocking comes to light. And so he grips you, angers you and makes you poignant. There may be some sub-par acting at the beginning, but he makes up for that in later scenes. His rendition of the transition from a cowardly boy-next-door to a feared don, too, is impeccable.

Nara Rohit is a perfect fit as a cop and a resident of Hyderabad's Old City. His expressions depict sternness, aggression, sincerity and almost sociopathic vengeance, flawlessly, and in all his insanity, he shows you clear glimmers of goodness. He and Vishnu are a lethal combination, and make it difficult for you to pick a side.

Brahmaji in a supporting role adds to the tension and also provides the mild comedy necessary to make this dark humour work. Sasha Singh as Riya also impresses in a role that can't be revealed as it would be a spoiler.

A downside to this factionist black comedy is the cinematography (Naveen Yadav). This is one area where RGV's films outdo most. Yadav doesn't render enough sepia or burnish tones to add grit or macabre to the gory narrative. The cinematics appears to be shot by cameras mostly used in romcoms.

Sai Karthik's rock and EDM riffs enhance the leg-grabbing thrills. The beats during the gunfires, hand-to-hand combat and chases are just so, and you might find those tunes on a loop in your head over and over again after the movie. The soundtrack in general gets you more involved in the film.

While Vangaveeti appeals to your mind with its grim visuals, the latter etches itself on it without those. RGV might justifiedly see a reflection of his younger self in Chandra.
Share. Save. Connect.
Tweet
APPATLO OKADUNDEVADU SNAPSHOT 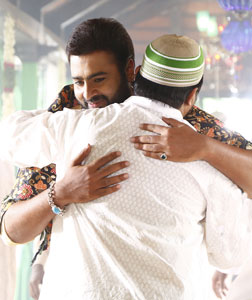 ADVERTISEMENT
This page was tagged for
Appatlo Okadundevadu telugu movie
Appatlo Okadundevadu reviews
release date
Sree Vishnu, Taniya Hope
theatres list
Follow @fullhyderabad
Follow fullhyd.com on
About Hyderabad
The Hyderabad Community
Improve fullhyd.com
More
Our Other Local Guides
Our other sites
© Copyright 1999-2009 LRR Technologies (Hyderabad), Pvt Ltd. All rights reserved. fullhyd, fullhyderabad, Welcome To The Neighbourhood are trademarks of LRR Technologies (Hyderabad) Pvt Ltd. The textual, graphic, audio and audiovisual material in this site is protected by copyright law. You may not copy, distribute, or use this material except as necessary for your personal, non-commercial use. Any trademarks are the properties of their respective owners. More on Hyderabad, India. Jobs in Hyderabad.