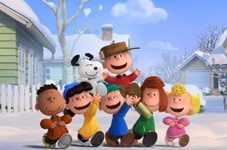 Josh / fullhyd.com
EDITOR RATING
6.5
Performances
Script
Music/Soundtrack
Visuals
7.0
7.0
7.0
9.0
Suggestions
Can watch again
Yes
Good for kids
Yes
Good for dates
Yes
Wait for OTT
No
Well, all right now, if your question is going to be, "Hey fullhyd, as an unbiased neutral viewer who has not read any Peanuts earlier, do you suppose I'll like this film?" our answer will have to be - um, unlikely. While it has great animation, you might find the narrative dawdling, the characters strange, and the drama unexciting. But that isn't really a fault of the film, though.

Peanuts, the comic strip, itself is something of a misfit in the contemporary child entertainment scenario. Today's children's animation films peddle the principle of fighting-against-all-odds-and-realizing-one's-dreams in an unrelenting manner. The world could be against you but you can still achieve something if you wanted it desperately. You could be a rat but you could still become a world class chef, or you could be a fat giant panda but you could still become a Kung-Fu master.

Charlie Brown had no such luck, though. He, too, fights against all odds, but he fails, repeatedly. In the fifty years of Peanuts, Charlie Brown was almost always a loser with a bare flash of success coming his way once in a blue moon. However, Charlie Brown fought on nonetheless. Depressed? Yes. Failure? Yes. Giving up? No, sir. Charlie Brown is a different breed of hero. Peanuts is a distinct faucet of motivation.

And this kind of motivation is not something that is greatly sought, of late. An Ayn Randian entitlement to success is currently in vogue. Movies will not tell us that the world is still unfair, and that we may still fail but that we better attempt nevertheless (whatever happened to Nishkama Karma, we ask you). That is a reason why Peanuts can come across as a bore, as an unexciting piece of well-made animation. Unless you're a fan, of course.

If you're wondering why we are in the fifth paragraph without so much as a hint of the plot, that's because there isn't one. The film pretty much details Charlie Brown's attempts at impressing the new kid on the block - the mysterious little red-haired girl, and the flights of fantasy his best friend Snoopy (the dog, yes - and flights literally; he is a World War I flying ace in his dreams).

Craig Schulz and Brian Schulz (the son and grandson respectively of Peanuts' creator Charles Schulz) take this non-plot and write a cute puppy of a film out of it. They stick largely to the old tropes but they venture beyond what Charles Schulz might have done - they give Charlie Brown a small triumph. Charles Schulz is known to have modeled Charlie Brown after himself, and the red-haired girl was someone Schulz never gathered the courage to speak to. He would never write a strip where Charlie would actually hit it off with his dream girl. But the movie manages to become a tribute when his son and grandson do the impossible for him.

The old school sensibility of the comics is amalgamated with the cutting-edge technology that our animated movies are made of, and the result is rather impressive. Director Steve Martino (Ice Age: Continental Drift), particularly succeeds in shaping Snoopy every bit as quirky, sheepish, heroic and adorable as the comics made him. Snoopy's long fantastic stretches as the novel writer, as the World War I flying ace and as Joe Cool (he's got more swag than any hipster out there) are shaped beautifully, and can endear the film to any fan of the series.

Peanuts, the movie, can be almost dismissed as a film in its own right. But as a tribute to the legacy of a phenomenal five-decade-old series (it is a fact that it was a compelling inspiration for Bill Watterson's Calvin and Hobbes - another of the greatest comic strips of all times), the film makes good on its promise. The characters are all there, amusing and delightful as ever. Charlie Brown is still fighting his way through life. Snoopy is still the world's most lovable canine. 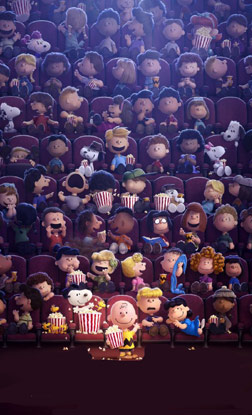 ADVERTISEMENT
This page was tagged for
Snoopy and Charlie Brown: The Peanuts Movie (3D) english movie
Snoopy and Charlie Brown: The Peanuts Movie (3D) reviews
release date
Noah Schnapp, Hadley Belle Miller
theatres list
Follow @fullhyderabad
Follow fullhyd.com on
About Hyderabad
The Hyderabad Community
Improve fullhyd.com
More
Our Other Local Guides
Our other sites
© Copyright 1999-2009 LRR Technologies (Hyderabad), Pvt Ltd. All rights reserved. fullhyd, fullhyderabad, Welcome To The Neighbourhood are trademarks of LRR Technologies (Hyderabad) Pvt Ltd. The textual, graphic, audio and audiovisual material in this site is protected by copyright law. You may not copy, distribute, or use this material except as necessary for your personal, non-commercial use. Any trademarks are the properties of their respective owners. More on Hyderabad, India. Jobs in Hyderabad.