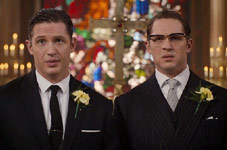 Josh / fullhyd.com
EDITOR RATING
6.5
Performances
Script
Music/Soundtrack
Visuals
9.0
6.0
7.0
8.0
Suggestions
Can watch again
No
Good for kids
No
Good for dates
No
Wait to rent it
Yes
The Kray Twins (Reginald "Reggie" and Ronald "Ronnie" - both played by Tom Hardy) were notorious gangsters in London in the 1950s and '60s. Their primary achievement was the level of organisation in their crime. It was a business like anything else. With the front of a nightclub, they ran a plethora of illegal activities all the while hobnobbing with celebrities and politicians alike. Their story has wild elements - right from mental illness (Ronnie was paranoid schizophrenic) to homosexual orgies (with Labour and Tory representation, no less).

Now, the question is - does anyone care? The brisk answer is - not so much, no.

The ones who actually enjoy accurate stories of crime are already neck-deep into documentaries to pay much attention to the badly mangled "reality" in the film. Reggie never raped his wife Frances (Emily Browning), and yet, such a rape becomes a crucial plot device in the film. Nor was he calm and rational as the movie showed. But the film goes out on a limb to contrast the mentally ill Ronnie with the sane Reggie. Sure, Reggie wasn't paranoid schizophrenic, but he wasn't the Buddha-incarnate, either.

Nor is the film for those who just want passable entertainment or thrills. It often plays with a languid pace with some sudden flashes of brilliance, and consequently doesn't cause your attention to gravitate to its proceedings throughout. It is painstakingly put together with an emphasis on appearing very realistic, and the truth is, reality is only interesting in flashes.

It is the almost flawless workmanship in constructing the film that grasps your attention. There is a certain polished darkness to the frames which echoes the grimy nature of events in progress. The sets, art direction, make-up and costumes are bang on target. The soundtrack is well textured, making use of all the soul and jazz in the nightclubs of London of the time. Technically, the film is very competently put together.

And the department with absolute excellence is the acting, of course. Tom Hardy rides a juggernaut of a performance as both of the Kray twins. Suave, composed and even generous as Reggie, and bizarrely out of his mind as Ronnie, he gets to play Robin Hood, Romeo, Caligula and Marquis de Sade all in one film. And the performance lags nowhere. The variation he brings about in the two brothers bespeaks a splendidly confident expertise.

There are sturdy performances by others, too, but none that stands out (or maybe we were blinded by Hardy's brilliance - we can't say). Emily Browning, though, feels wasted in a poorly-written character.

In these respects, Legend is very similar to Black Mass with a sterling performance by the lead, excellent technical output, but unsatisfying over all. Does it have anything to do with the glamourised approach to crime? Are the makers mistaken in thinking that any realistic representation of a true story of crime would automatically be compelling for an audience?

Yeah, you can argue that some of the most admired movies ever are gangster films with clinical detailing, but films like Goodfellas had an element of novelty to them. The detailing was attractive because people had a genuine curiosity towards crime (and the mentality of crime), but as decades passed and more and more crime biopics released, the novelty was lost. Genre fans can spot the repetitiveness, and the rest, like we mentioned earlier, don't care much.

Script- and plot-wise, there is very little to appreciate in films like Legend and Black Mass. Curiosity, drama, love or catharsis - to these basic human interests, there is hardly any appeal at all. In Legend, however, there is that virtually redeeming Hardy appeal.
Share. Save. Connect.
Tweet
LEGEND (2015) SNAPSHOT 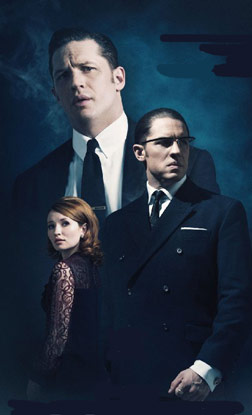 ADVERTISEMENT
This page was tagged for
Legend (2015) english movie
Legend (2015) reviews
release date
Tom Hardy, Emily Browning
theatres list
Follow @fullhyderabad
Follow fullhyd.com on
About Hyderabad
The Hyderabad Community
Improve fullhyd.com
More
Our Other Local Guides
Our other sites
© Copyright 1999-2009 LRR Technologies (Hyderabad), Pvt Ltd. All rights reserved. fullhyd, fullhyderabad, Welcome To The Neighbourhood are trademarks of LRR Technologies (Hyderabad) Pvt Ltd. The textual, graphic, audio and audiovisual material in this site is protected by copyright law. You may not copy, distribute, or use this material except as necessary for your personal, non-commercial use. Any trademarks are the properties of their respective owners. More on Hyderabad, India. Jobs in Hyderabad.