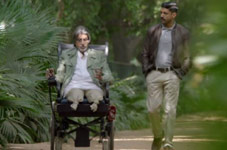 Zehra Abbas / fullhyd.com
EDITOR RATING
6.0
Performances
Script
Music/Soundtrack
Visuals
8.0
4.0
6.0
7.0
Suggestions
Can watch again
No
Good for kids
No
Good for dates
Yes
Wait for OTT
No
Danish Ali (Farhan Akhtar), an ATS officer, pays a tragic personal price for a single act of over-zealous recklessness. His four-year-old daughter is caught in the crossfire of a shootout, and dies. His wife, Ruhana (Aditi Rao Hydari), blames him for the loss, and they decide to live apart in order to cope with their loss.

A serendipitous encounter draws him into the world of Omkar Nath Sharma or Panditji (Amitabh Bachchan), himself a grieving father whose daughter died under mysterious circumstances. Over endless games of chess, and endless chess metaphors, the two men develop a rare friendship that inspires Danish to join Panditji on his obsessive quest for revenge.

By now, you must have realized that the basic skeleton of the story is like any skeleton dangling in a Chem lab - common. The barebones premise has been used and over-used, but what Wazir brings to the table is a set of laudable performances.

Watch Akhtar portray the numbing caused by an unspeakable grief, the inability to articulate his loss, his helplessness in the face of his marriage woes, and then see him depict the stubborn determination that makes him a good ATS officer, and an unsentimental loyalty to his aged friend. At no point is Akhtar's act contrived; it is a seamless portrayal of the many facets of a complicated character.

Then let's talk about Panditji. He endures a similar tragedy but copes very differently. Panditji doesn't suffer from Danish's inability to articulate his feelings. Articulate them he does, and the genial banter, philosophical outpourings, and love for music, chess, life all serve to mask a festering obsession for vengeance. Bachchan is great as the spirited and wise Elder, but when the mask slips and the scars show, that's when he truly rises to the occasion.

The chemistry between Akhtar and Bachchan is the highlight of the film - a lovely interplay between a muted personality and a boisterous one. The light and darkness that both men wrestle with, and the resultant love that is born out of shared suffering sans maudlin sentimentality, are what take the film to a higher plane.

Manav Kaul as Qureshi, the quintessential crooked politician, puts in a wonderful performance as well. His smooth menace reminds you of a spider quietly maneuvering you into a corner, and like all good villains, he succeeds in making you long for his comeuppance. Aditi Rao Hydari is good at emoting through her silences, while Neil Nitin Mukesh does his best in his few scenes and is genuinely frightening in parts. John Abraham, though, is wasted in his special appearance, which basically requires him to stare at people with hooded eyes.

Indeed, the fantastic performances almost distract you from the gaping plot holes, and they almost persuade you to forgive unnecessary dumbing down.

Vidhu Vinod Chopra's and Abhijat Doshi's script fails to resolve a number of illogical plot threads. We'll quote one example as evidence and let you decide. Panditji is convinced that Qureshi murdered his daughter despite lack of evidence, simply because he read his guilt in his eyes. In turn, that supreme logic is sufficient for Danish, an ATS officer mind you, to investigate, confront and threaten a powerful and respected politician. And here's the central problem with Wazir - these are two of the best scenes in the film thanks to stellar acting, but their impact is diluted due to careless writing.

Considering that the script is not the smartest or the most original product, it's inexplicable why director Bejoy Nambiar indulges in a lot of unnecessary handholding of his audiences. Just because the central metaphor of the film revolves around chess doesn't mean we won't get it. If anything, Nambiar's slow motion montages, explanatory flashbacks and solicitous voiceovers make it seem more like a game of tic-tac-toe by the end.

At 1 hour and 42 minutes, Wazir is mercifully shorter than other indulgent Bollywood products. The first half is taut and riveting, but post-interval the makers channel Robert Frost, and they can't seem to decide which road to take. The second half tries to spring a few surprises on you and saves a big reveal for the end. Trouble is, the writers also leave little breadcrumbs all the way, and if you play close attention to the dialogues, nothing is a surprise. Result? A muddled second half and a disappointing resolution. We think it might have something to do with Chopra and Joshi being the writers as well as the editors. A third party in the editing room might have been a more ruthless and effective influence.

Wazir's production values are good, and the action choreography is appropriately gritty and realistic. Akhtar makes the effort to look the part as usual, and you will wince when he beats someone to pulp. The background score does a fine job of accentuating the drama, and a song like "Tere Bin" will stay with you after the film.

En fin, Wazir is a film of contradictions. It is clumsy and inept at handling its various plotlines but deft and sensitive in its treatment of the emotional core of the movie. The cast raises the finished product to a certain level, but the writing drags it down. These reasons will most likely prevent Wazir from becoming a "badshah" at the box-office. Our commiserations to the valiant cast.
Share. Save. Connect.
Tweet
WAZIR SNAPSHOT 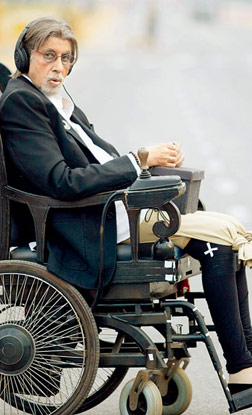 ADVERTISEMENT
This page was tagged for
Wazir hindi movie
Wazir reviews
release date
Farhan Akhtar, Amitabh Bachchan
theatres list
Follow @fullhyderabad
Follow fullhyd.com on
About Hyderabad
The Hyderabad Community
Improve fullhyd.com
More
Our Other Local Guides
Our other sites
© Copyright 1999-2009 LRR Technologies (Hyderabad), Pvt Ltd. All rights reserved. fullhyd, fullhyderabad, Welcome To The Neighbourhood are trademarks of LRR Technologies (Hyderabad) Pvt Ltd. The textual, graphic, audio and audiovisual material in this site is protected by copyright law. You may not copy, distribute, or use this material except as necessary for your personal, non-commercial use. Any trademarks are the properties of their respective owners. More on Hyderabad, India. Jobs in Hyderabad.