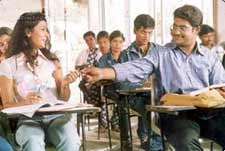 EDITOR RATING
3.0
Performances
Script
Music/Soundtrack
Visuals
NA
NA
NA
NA
Suggestions
Can watch again
NA
Good for kids
NA
Good for dates
NA
Wait to rent it
NA
Student No. 1 ends with Kota's leg being trapped in the door of a collapsed car, and Brahmanandam and Ali debating on whether the best way to get it out would be sawing the leg off the car or the car off the leg. Most of the crowd thinks that this is just a joke and politely laughs, but we are the indomitable reviewers whose only fear is that our profession will fall on our heads, and make valiant attempts to detect profound messages. So here's the moral of the story:
There, that's the weekly dose of learning for you. But you have probably wandered in here also wondering what this film is about, so here goes.

Aditya (NTR Jr) is a student of the RNR Law College, a brilliant figment of someone's imagination. The college has an awful reputation, and yet attracts the most curvaceous of women. The lecturers firmly share the students' belief that classes end after attendance, the library is also a disco (rather, just a disco), and the bully and his cronies beat up students 'discovered' studying.

Aditya is your run-of-the-mill Tollywood student - brilliant, eloquent, excellent at dancing and fighting, and complete with an out-of-the-earth flashback. He desperately wants to study, for some reason consistently undisclosed to us (what all things you have to justify these days), but the bullies won't let him. They even beat him up, but somehow he won't respond. Of course it isn't helplessness - what normal Tollywood student can't beat up a few dozen goons?

Add these to his lack of any tangible recognition of the romantic overtures of Anjali (Raji), his pretty classmate, and his stalling her advances with profound-sounding statements, and you realize that the scriptwriter is trying to make you eagerly look forward to some flashback. Whether you oblige or not depends purely on how sympathetic you are to people who try hard.

The flashback hits you anyway, with Aditya narrating his traumatic experiments with his dharma to an entire college after a superman scene. They are all in tears, and you are in suspended motion. The rest of the film could have been an experience in and out of personal trauma for you, but a very unusual man salvages it - Kota. Kota is brilliant in this otherwise less than mediocre drama, and shows some of the genius of his Satruvu and Gaayam essays.

Student No. 1 could have been a good movie with a better script, better lead actors, better music, better comedy and better ticket prices. NTR Junior fails to give any distinctive personality to the character he enacts, and is poor at dialogue delivery. He simply doesn't have any flair for comedy. And some scenes comparing him to his grandfather are just cheap tricks to arouse some ill-befitting nostalgia - grandfather was nothing like this at any stage of his career. Like demonstrated earlier, Junior is surprisingly good at the dance and stunt sequences, though, for a man his size - he's grossly overweight.

Raji is just about okay, and has nothing to do apart from falling in love with her man and staying that way. The comedy is poor, especially that involving Brahmanandam and Ali. Kota is the saving grace of a movie that lacks in nearly every department of filmmaking, starting right from the script.

The artificialness of the script stands out - no dad would treat his distraught son the way Aditya's does, no person would do to another what the father of the girl Aditya saves does to him, and few college bullies would be as immature as the one Aditya keeps fooling. And things like Aditya being struck by misfortune just because his sister doesn't cross his path on the fateful day just make you want to say, Mr. Rao, please make films for audiences of this era! Yes, this is a film from K Raghavendra Rao.
Share. Save. Connect.
Tweet
STUDENT NO 1 SNAPSHOT

See Student No 1 full details
STUDENT NO 1 USER REVIEWS
1 - 10 OF 10 COMMENTS
POSITIVE  |  NEGATIVE |  NEWEST  |  OLDEST  |  MOST HELPFUL  |  LEAST HELPFUL
USER RATING
4.5
48 USERS
Performances
Script
Music/Soundtrack
Visuals
NA
NA
NA
NA
Can watch again - NA
Good for kids - NA
Good for dates - NA
Wait to rent it - NA
Critic 1 on 29th Mar 2002, 6:00am | Permalink
somebody spare the industry from this f***ing ugly looking heroes...
RATING
2
Savaraiah Botla on 28th Nov 2001, 9:28pm | Permalink
another horrible hero...how long we have to suffer with these non-actors.
RATING
2
Sultan Miya on 26th Nov 2001, 9:16pm | Permalink
fat people can take solace from this movie.They can identify with the hero...how to dance,how to fight with a fat body.
RATING
2
Kruthika on 17th Nov 2001, 5:14pm | Permalink
OVER ALL IN THE MOVIE IS GOOD.NTR Jr DANCE IS GOOD. HE HAS TO IMPROVE HIS PERFORMACE & DIALOGE DELIVERY.
RATING
8
NTR Ghost on 7th Nov 2001, 3:54am | Permalink
I am in hell now for watching the movie.Yama is subjecting me to all kinds of torture for watching this movie.But I can withstand this torture,cos I have seen this movie which is worse.Hee hee heeeeeee!
RATING
2
NTR Ghost on 10th Oct 2001, 4:22am | Permalink
This is NTR from heaven,I watched the movie and felt sorry for the audience.I cant give a rating less than * because it is the last.My sincere excuses for the people who have seen this movie on behalf of Jr.ntr
RATING
2
Ramya Rao on 5th Oct 2001, 4:36am | Permalink
Can he think,he really makes it.
My advice to him"Look at yourself in
the mirror" it tells all.dont torture the viewers Mr Junior.dont tarnish the image of your grandpa.

RATING
2
Nayan Shastri on 5th Oct 2001, 4:32am | Permalink
Somebody save me,Iam having nightmares of this fat guy.
RATING
2
Bhasker Vedula on 5th Oct 2001, 4:28am | Permalink
what a horrible personality.The great NTR's soul might be sobbing looking at this ugly
personality.
He is ruining the image of NTR.who is this fellow to retain the 3 letters
NTR,which gives fond memories.This fellow should be crucified for his non performance

RATING
2
Hari Rao on 5th Oct 2001, 4:23am | Permalink
It seems that this fellow is hell bent on
destroying his grandpa's
name.Throw
this fellow into the Bay of bengal

ADVERTISEMENT
This page was tagged for
student no 1 review
Student No.1
Student No 1 telugu movie
Student No 1 reviews
release date
Follow @fullhyderabad
Follow fullhyd.com on
About Hyderabad
The Hyderabad Community
Improve fullhyd.com
More
Our Other Local Guides
Our other sites
© Copyright 1999-2009 LRR Technologies (Hyderabad), Pvt Ltd. All rights reserved. fullhyd, fullhyderabad, Welcome To The Neighbourhood are trademarks of LRR Technologies (Hyderabad) Pvt Ltd. The textual, graphic, audio and audiovisual material in this site is protected by copyright law. You may not copy, distribute, or use this material except as necessary for your personal, non-commercial use. Any trademarks are the properties of their respective owners. More on Hyderabad, India. Jobs in Hyderabad.