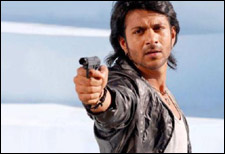 Deepa Garimella / fullhyd.com
EDITOR RATING
2.5
Performances
Script
Music/Soundtrack
Visuals
2.5
2.5
5.0
3.5
Suggestions
Can watch again
No
Good for kids
No
Good for dates
No
Wait to rent it
No
Allen (Amarjeet) is a stubbled leather jacket-toting dude who's just landed in Mauritius with a photo of his girlfriend Melvina (Deepal Shaw) in hand. He's here to to do some work for a don called Anthony (Sharat Saxena), because he needs the money to save the life of Melvina, who's dying of drug overdose, because her parents keep fighting, because they hate each other. Anyone would hate such parents. If not for them, Runway wouldn't have been made.

As Anthony commands him, Allen murders a big shot called Victor, but now finds that someone else is after his life, desperately trying to get him to act. But Allen doesn't pay heed to his director. No one in this film does. Neither would you, if you found out that Lucky Ali is in your film and chasing you. Your acting would have to be 450 times better than Lucky Ali's.

Allen seeks help from Shaina (Tulip Joshi), who works at a dance bar, and who gets him a passport to go back home. Unfortunately, Allen finds out that Melvina's dead. He also finds out that Victor's own family members arranged Victor's murder. And, that Khalid (Lucky Ali) was hired by Anthony to finish him (Allen) off. All this is too mind-boggling now.

Runway is a flick that has nothing going for it. The ending illustrates its pointlessness - they round off the film with a song, followed by its remix, and then, the credits roll. The story must have taken exactly 4 minutes to come up with. Incidentally, that's the exact amount of talk time in the film - dialogues comprise very little of the proceedings, with most of the film being silent or with some basic backgound music, supposedly building up on the 'thrill'.

The actors must realize that if you want to star in a thriller, you'll at least need to be awake, forget about keeping audiences awake. Tulip Joshi strongly reminds you of Katrina Kaif. The rest of the cast strongly reminds you of the last time you wrapped a snake around your neck. If you've never wrapped a snake around your neck, you'll do it now anyway.

As for the music, the 'Khuda Ke Liye' song might be the only one worth remembering, especially because of the back-to back bit that we mentioned. And the film has the look of being old enough to have seen Amitabh Bachchan's first pimple.

Don't blame the hero who's worn only one set of clothes throughout the film - Runway stinks anyway.
Share. Save. Connect.
Tweet
RUNWAY SNAPSHOT

ADVERTISEMENT
This page was tagged for
Runway hindi movie
Runway reviews
release date
Amarjeet, Tulip Joshi
theatres list
Follow @fullhyderabad
Follow fullhyd.com on
About Hyderabad
The Hyderabad Community
Improve fullhyd.com
More
Our Other Local Guides
Our other sites
© Copyright 1999-2009 LRR Technologies (Hyderabad), Pvt Ltd. All rights reserved. fullhyd, fullhyderabad, Welcome To The Neighbourhood are trademarks of LRR Technologies (Hyderabad) Pvt Ltd. The textual, graphic, audio and audiovisual material in this site is protected by copyright law. You may not copy, distribute, or use this material except as necessary for your personal, non-commercial use. Any trademarks are the properties of their respective owners. More on Hyderabad, India. Jobs in Hyderabad.