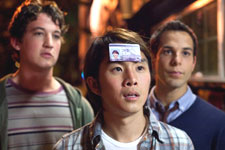 Nupur Barua / fullhyd.com
EDITOR RATING
5.0
Performances
Script
Music/Soundtrack
Visuals
6.0
5.0
5.0
6.0
Suggestions
Can watch again
No
Good for kids
No
Good for dates
Yes
Wait to rent it
Yes
After the astounding success of The Hangover, any movie that is in any way related to the tale of four immoral bachelors deserves consideration - or at least, it did, till the makers released The Hangover 2, and many fans realised that it was never going to be as good as the first time. So when 21 & Over promoted itself as yet another offering from the writers of that comic caper, there were not too many expectations, which is good, because then there is less scope for disappointment.

In the tradition of debauchery that people look forward to in these movies, Casey (Skylar Astin) and Miller (Miles Teller) decide to surprise their childhood pal Jeff (Justin Chong) by visiting him on the eve of his medical examination. The two boys want to take their Asian friend out drinking, but Jeff's strict and scary father (Francois Chau) wants his son to stay sharp for an interview that he has lined up.

The boys insist on sneaking Jeff out nevertheless. It is his 21st birthday, and he can finally drink to his heart's content and behave as badly as he wants. Jeff initially wants to just have one beer, and of course, he cannot stop at that.

Before you can say "Harold and Kumar", the night goes out of control. From angry Latino babes to indifferent Asian peers, the boys live out stereotypical situations one after the other, and the whole night becomes a nightmare of epic proportions.

The story is predictable, and it would have been surprising if it weren't. The writers have a flair for comedies of errors. The problem is that they cannot offer a fresh take on the social lives of young adults in the USA. From the American Pie series to the whole band of rom coms and high school movies, all Americans are portrayed as harmless racists who are self-absorbed, and completely in a world of their own - a world in which they do not give two hoots about the rest of the world or about real life in general.

The screenplay is tight, but extremely dull and foreseeable for a comedy. There are no surprises, and therefore any intended intense plot points are wasted.

The story is simple enough - a trio of young boys out on a wild night of partying. Eventually, they realise that they are not as simple as they think they are, and that all of them have issues. The script does not give you any indication of the fact that this may turn out to be a movie about growing up (that then slots this in another genre), and three-fourths of the film revolves around decadence.

The makers of this film have confirmed that there is a Chinese version of this movie. In it, the lead will be a Chinese boy, who loses his values when he goes to the US to study, and then comes back to his senses and Chinese culture. The Chinese want this version to release in their country. So much for American pride in their all-embracing culture and quality of filmmaking.

The actors do their bit well, although Skylar Astin does not look convincing as a man in his early 20s. The movie clearly belongs to not one actor, but all of them - and what is abundantly clear is that they all try really hard to remain true to the spirit and message of the movie, whatever it is.

Francois Chau, however, stands out as the tough-as-nails ambitious father. Most people remember him from the series Lost, and somehow, he is as scary here as he was on television. Samantha Futerman is commendable, and Justin Chon is clearly wasted - he sleeps through most of the escapade, and even runs around in women's lingerie.

Production design, costume, and cinematography are nothing to write home about, but the editing is slick, thankfully. Music is almost pass?Â©.

The movie is too similar to stuff you have seen before, to make it worth a watch. It has its moments of fun and laughter, but even then, you really have to make an effort to understand the humour (intended or otherwise). It is a tiring movie, to say the least, but it will find its niche amongst youngsters who want to live the American dream as it is portrayed in the movies.
Share. Save. Connect.
Tweet
21 & OVER SNAPSHOT 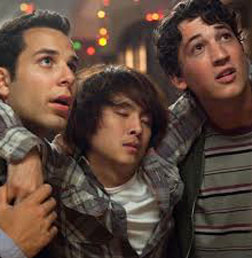 ADVERTISEMENT
This page was tagged for
21 & Over english movie
21 & Over reviews
release date
Justin Chon, Skylar Astin
theatres list
Follow @fullhyderabad
Follow fullhyd.com on
About Hyderabad
The Hyderabad Community
Improve fullhyd.com
More
Our Other Local Guides
Our other sites
© Copyright 1999-2009 LRR Technologies (Hyderabad), Pvt Ltd. All rights reserved. fullhyd, fullhyderabad, Welcome To The Neighbourhood are trademarks of LRR Technologies (Hyderabad) Pvt Ltd. The textual, graphic, audio and audiovisual material in this site is protected by copyright law. You may not copy, distribute, or use this material except as necessary for your personal, non-commercial use. Any trademarks are the properties of their respective owners. More on Hyderabad, India. Jobs in Hyderabad.