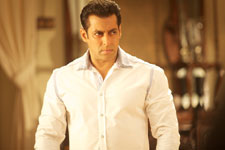 Nupur Barua / fullhyd.com
EDITOR RATING
6.0
Performances
Script
Music/Soundtrack
Visuals
6.0
5.0
5.0
7.0
Suggestions
Can watch again
No
Good for kids
Yes
Good for dates
Yes
Wait to rent it
Yes
For those who came in late, or who have been sleeping the past few years - Salman Khan is a genre. Period. He does not act in drama and action films. He acts in what are known as Salman Khan films, and they may or may not have a story, or even a sub-genre. Therefore, to compare a Salman Khan movie with any other, or even his previous movies, is folly. Jai Ho may be a remake of the Chiranjeevi-starrer, Stalin, but Sohail Khan has adapted it to the Salman Khan genre, and the rest will soon be history.

The story is about Jai (Salman Khan), who is a do-gooder. He is a propagator of the pay-it-forward theory. Basically, every person he helps has to help three more people. Those are his terms and conditions, since he is the protagonist.

Jai, an ex-army man is honest, of course, and essentially incorruptible, and it is his mission to rid this country of corruption, injustice and the works, one step at a time.

Such honesty has consequences, naturally, and Jai finds himself at war with an intimidating politician, Dasharath Singh (Danny Denzongpa). Jai's sister Geeta (Tabu) begs her brother to be practical, and to calm down. Jai tries, and this encourages Singh to become more and more obnoxious in his dealings.

Jai, who represents the common man, has no intentions of becoming a crusader, but unknown to him, the circle of benefactors that he initiated with his pay-it-forward theory is now a large one, and those people expect him, with their support, to change the way the world works. And slowly, Jai evolves from being a common man to an extraordinary superhero.

This could have been Salman Khan's Munnabhai. The story is simple enough, and, more importantly, relevant to our times. The message - that one person can make a difference - is not a novel one, but it seems necessary to tell people that complacency will get us nowhere.

The problem with the script is its structure. The plot does not move at an even pace, and is repetitive, especially when it deals with the moral issues that our society needs to revise. The story could have been more convincing, had the romantic angle not taken up so much time. Not that a crusader cannot have a love interest, but this love story is tedious, and uninspiring.

Though the story of this one man and his fight against the system is almost believable, the pay-it-forward theory seems a little convoluted. But then, the makers presumably set out to convince every citizen in this country about the power of the common man, and that is a message that may just resonate with most of the audience, given the present political drama that they are subject to in real life.

The dialogues were written for the front rows, of course, but the delivery by the leading actor is worth watching. You may just want to whistle at some of the lines he spouts. And there is plenty of action.

Only in a Salman Khan movie can you have so many well-known faces and still agree that Salman Khan is the hero. His lack of insecurity is apparent in his acting. He does what he wants to - give speeches, beat up people, and even sing and dance while he is at it. Playing Tabu's brother and Nadira Babbar's son opens up a whole new gamut of emotions that Salman Khan movies are not known for. The three of them create a believable world amongst them, and their performances are worth watching.

The other actors, such as Pulkit Samrat, Genelia D'Souza and Mohnish Behl, have small but significant roles. Suneil Shetty appears and disappears before you can say "Paro".

Daisy Shah is rather lost in this ensemble cast, but she can dance. Naman Jain as Salman Khan's nephew makes a mark, yet again. And Danny Denzongpa is a treat as the evil politician. His screen presence almost overshadows Salman Khan's aura - almost.

The biggest disappointment in the movie is the music. The less said of that, the better. The production design is rather kitsch, but that is the maker's idea of a common man's world. The costumes are slightly garish, especially when it comes to more glamorous appearances by the lead actress, but actors like Tabu and Nadira Babbar carry their clothes well.

The cinematography is similar to Wanted and Dabangg, but it is also has its own signature. And at almost three hours in length, it is obvious that the editor should have been less indulgent.

Watch Jai Ho if you are a Salman Khan fan, of course. And if you are not, you may just want to check out how the angry young man (not that Salman Khan is that young) has evolved in our movies over the years. It may become tedious watching in parts, and the lack of a proper screenplay may be jarring, but it is Salman Khan, and therefore enough reason to watch. Go without expectations, and you may be pleasantly surprised.
Share. Save. Connect.
Tweet
JAI HO SNAPSHOT 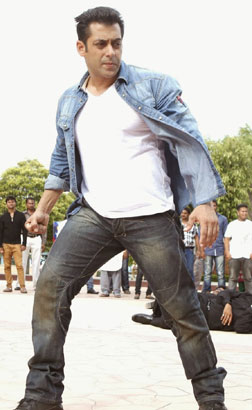 ADVERTISEMENT
This page was tagged for
Jai Ho hindi movie
Jai Ho reviews
release date
Salman Khan, Tabu
theatres list
Follow @fullhyderabad
Follow fullhyd.com on
About Hyderabad
The Hyderabad Community
Improve fullhyd.com
More
Our Other Local Guides
Our other sites
© Copyright 1999-2009 LRR Technologies (Hyderabad), Pvt Ltd. All rights reserved. fullhyd, fullhyderabad, Welcome To The Neighbourhood are trademarks of LRR Technologies (Hyderabad) Pvt Ltd. The textual, graphic, audio and audiovisual material in this site is protected by copyright law. You may not copy, distribute, or use this material except as necessary for your personal, non-commercial use. Any trademarks are the properties of their respective owners. More on Hyderabad, India. Jobs in Hyderabad.