T J Reddy / fullhyd.com
EDITOR RATING
5.0
Performances
Script
Music/Soundtrack
Visuals
7.0
4.0
7.0
8.0
Suggestions
Can watch again
Yes
Good for kids
No
Good for dates
No
Wait for OTT
Yes
Who is NGK? What are his problems? And why are we supposed to care?

NGK is Nanda Gopala Kumar (Suriya). He has a master's degree and a PhD, and was putting those to good use by working quite a lucrative job at a corporate company. Soon enough, he found himself disillusioned by the 9 to 5 grind and chose to become an organic farmer / social servant. His selfless social service attracted some unnecessary attention which resulted in him realising that one needs political power to affect real change in one's society. He chose to be a small part of a political party by himself, a spoke on the wheel. Unlike other spokes, however, he is now fully intent of breaking the wheel he is a part of.

Director Selvaraghavan fashions his primary character as one of us. Our problems are his problem. But unlike us, he is going to do something to fix them instead of fruitlessly complaining about them on social media and news channels.

What is NGK and why did we feel so let down by it?

NGK is south cinema auteur Selvaraghavan's foray into politically charged filmmaking. The man is known for his eccentric characters, grimy locales and in-depth analyses of said characters and locales, and also for having an unsentimental take on storytelling. Which one of these hallmarks does this film not have for it to be disappointing?

You'd expect us to say none of those, but that would be false. The truth is that it has bits and pieces of all of those elements, but they never coalesce, and that results in a movie that can easily be classified as a noble failure.

Why is NGK a noble failure?

NGK, the character, is quite like the film he is in. He begins as an idealist, but unlike Sarkar or Bharat Ane Nenu, he is not given a chance to wield his might from scene one. Instead, the idealist is put through the wringer. He is forced to clean toilets, clean his local MLA's dirty clothes and clean his party's image on his way to cleaning up his constituency. Not a state or a country, only a constituency. There is an air of realism to this sequence of events.

But this sense of gritty realism dissipates as the film goes along. The story focuses on the growth of NGK as a person, but the plot branches out into multiple threads. Being a star vehicle, the film requires its lead to be a part of all these threads, but that, in turn, throws a wrench into the film's narrative flow.

NGK is shoehorned into making choices that clash with his idealistic ways. Logic dictates that with every amoral choice he makes, his character sinks into the swamp one inch at a time. But his plummeting morality is said but not shown. NGK seems to learn the same wrong lesson every single time instead of compounding his knowledge with newer and shrewder methods of manipulation. The implications of NGK's very serious actions are tucked away as comedic relief.

Even though the filmmaking screams at us by asking us to look at its amoral anti-hero growing in prominence with every action, what we eventually see is family hero Suriya refusing to take the plunge, and this makes his descent a farce. What should have been an organic union between the character and his environment's transient morality ends up being a rushed and unearned descent into villainy.

NGK's political ideology had to go from being a seed to a stem to sprouting its first leaf and then its first branch, then becoming a plant, and then gradually growing the girth of its trunk on its way to becoming an unshakable titanic tree, but what we see is a seed followed by a tree, with everything in between being ignored or short-changed.

We just spoke about the failures. Where is all that nobility?

The nobility is in Selvaraghavan's élan as a filmmaker and in Suriya exercising his prowess as an actor. While the whole is not greater than the sum of its parts, some of those parts are absolutely spellbinding. Suriya intermittently embracing his dark side is a treat for fans of good acting, and when this is coupled with strong shades of primary colours reflecting off his face as an indicator of his mood, you can't help but appreciate the craft at hand.

A simple example of this would be the movie's final scene. When being interviewed by a news anchor, Suriya's face reflects a soothing green, but at the very instant he is posed with a question that challenges his view of himself, the background changes to a dark red. This directorial flair, when combined with the film's immaculate shot structure, works at elevating a visual experience riddled with continuity errors, from being a colossal bore on all fronts.

A strong background score aids Suriya's best performance in a long time. While his character is inconsistent, his performance is not. Rakul Preet Singh does some of her best acting when paired with Suriya, but her hyper-intelligent political PR agent is reduced to nothing more than arm candy after a while. In the same vein, Sai Pallavi's Geetha, who plays NGK's wife, is as cardboard as every other supporting character standing alongside her. They act their parts well, but the parts themselves are not written well enough.

NGK has a bone to pick with all these characters, but their sheer incompetence leads us to believe that NGK's true battle is against himself. But the film discredits itself by not making that conflict interesting enough to invest in. The idea is better than its execution.

Hey, this has gone on longer than the movie itself. What do we really want to say?

Like Khaleja, Nene Raju Nene Mantri, Spyder and so many other movies whose ambitions were stifled by poor execution, NGK is a film ripe for heated discussion more than viewing pleasure. It is a fundamentally broken film that gainfully tries to rebuild itself with every new scene. While we appreciate its enthusiasm, we refuse to overlook its shortcomings.
Share. Save. Connect.
Tweet
NGK (TAMIL) SNAPSHOT 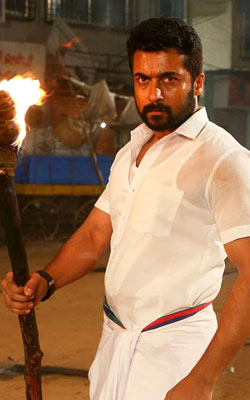 ADVERTISEMENT
This page was tagged for
NGK (Tamil) tamil movie
NGK (Tamil) reviews
release date
Suriya, Sai Pallavi
theatres list
Follow @fullhyderabad
Follow fullhyd.com on
About Hyderabad
The Hyderabad Community
Improve fullhyd.com
More
Our Other Local Guides
Our other sites
© Copyright 1999-2009 LRR Technologies (Hyderabad), Pvt Ltd. All rights reserved. fullhyd, fullhyderabad, Welcome To The Neighbourhood are trademarks of LRR Technologies (Hyderabad) Pvt Ltd. The textual, graphic, audio and audiovisual material in this site is protected by copyright law. You may not copy, distribute, or use this material except as necessary for your personal, non-commercial use. Any trademarks are the properties of their respective owners. More on Hyderabad, India. Jobs in Hyderabad.