Deepa Garimella / fullhyd.com
EDITOR RATING
4.0
Performances
Script
Music/Soundtrack
Visuals
6.5
3.5
5.0
6.0
Suggestions
Can watch again
No
Good for kids
No
Good for dates
No
Wait to rent it
Yes
One doesn't crib about the craft in a political rally. Or about the originality of its speeches. Or about the age of the person(s) leading it.

Adhinayakudu makes no pretense of what it actually is - a Balayya movie that is also politically-motivated. That is a phrase loaded with implications - of unreal fights, illogical conflict between good and evil, and undisguised dialogues targeted at all kinds of rivals.

It's a world in which street-side goondas attempt the rape of a woman in the presence of at least a 100 high-profile people (that include foreign investors, law-makers and policemen), all of whom choose to stare dumbly at the proceedings. It's a world in which, when Balayya shoots, 3 bullets from his gun strike 3 targets all at once. It's a world that has only one person capable of rational thinking - the rest of them are mindless cattle who worship this person, or over-dramatic villains who are too stupid to guard themselves. Above all, it is a world with 3 Balayyas.

Family politics and local politics intertwine, and there is general mayhem all around, all the time. When Bobby is not fighting injustice, he is romancing his maradalu Deepthi (Lakshmi Rai), and constantly conning the gullible Brahmam (Brahmanandam).

This is that typical mode that aging stars get into when they're in the process of erasing all distinction between their screen image and their personal political aspirations. However, the scale of the film is several notches below that of an Indra or a Simha. Which also means that there has been no attempt to make this a real "movie" with any entertainment or emotional value.

The makers clearly had no intention of lending this film anything that would convert a non-fan into a fan. Brahmanandam's presence serves as some comic relief, but that's not enough to entertain someone who's not interested. There's nothing in here except for the dialogues, which aren't exactly the pinnacle of awesomeness anyway. The tired story is merely an excuse for an agenda, and that is what matters here.

As for the actors, they're all doing their thing, and you can't fault them. Balakrishna rules the movie, and shows his characteristic energy in doing everything required of him in the three roles.

However, the stunning Lakshmi Rai deserves special mention for being in a league independent of the film. She's amazing as a heroine, exuding just the right amount of poise and sensuality. Sadly, Saloni is around only for one song.

The songs are embarrassingly kitschy. S P Balasubrahmaniam's '90s tone seems to have been rediscovered here, and coupled with tacky dressing and over-the-top choreography, the dance numbers, at least, are avoidable. The cinematography is ordinary.

In all, watch Adhinayakudu only if you're a fan, or have an agenda yourself.
Share. Save. Connect.
Tweet
ADHINAYAKUDU SNAPSHOT 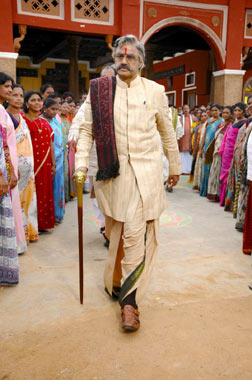 ADVERTISEMENT
This page was tagged for
Adhinayakudu telugu movie
Adhinayakudu reviews
release date
Balakrishna, Lakshmi Rai
theatres list
Follow @fullhyderabad
Follow fullhyd.com on
About Hyderabad
The Hyderabad Community
Improve fullhyd.com
More
Our Other Local Guides
Our other sites
© Copyright 1999-2009 LRR Technologies (Hyderabad), Pvt Ltd. All rights reserved. fullhyd, fullhyderabad, Welcome To The Neighbourhood are trademarks of LRR Technologies (Hyderabad) Pvt Ltd. The textual, graphic, audio and audiovisual material in this site is protected by copyright law. You may not copy, distribute, or use this material except as necessary for your personal, non-commercial use. Any trademarks are the properties of their respective owners. More on Hyderabad, India. Jobs in Hyderabad.