It's a prequel! It's a remake! It's two cash cows in one! And thanks to an A-list cast, including Sir Anthony Hopkins and Ed Norton, not to mention dexterous direction by Brett Ratner and screenplay by Ted Tally, Red Dragon is two hours of delectably creepy and suspenseful fun.

Taken from the pages of Thomas Harris' terrifying first novel in the trilogy, Red Dragon is certainly a twisted psychological encounter of the best kind. The pace of the film is unstoppable as it races from one scene to the next in hopes of trying to stop a serial killer.

Red Dragon begins in Baltimore in 1980 with the capture of noted psychologist Hannibal Lecter (Hopkins), who frequently consults to the FBI for psychological profiles. Lecter is convicted and locked away for life. Actually, it's for nine consecutive life sentences, but after the first one, who's counting? 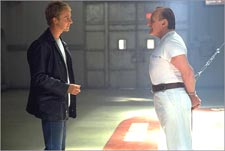 The agent who captures him, Will Graham (Edward Norton), suffers some serious wounds during the arrest and ends up retiring to a peaceful life in Florida with his wife Molly (Mary Louise Parker) and son Josh (Tyler Patrick Jones). Several years later, Graham is called out of retirement by his boss Jack Crawford (Harvey Keitel) to consult on the 'Tooth Fairy' murders, which have so far claimed the lives of two families.

Soon, Hannibal's expertise on the mental machinations of the criminally insane are again called upon by Graham, the same cracker whose heart Hannibal tried to transplant onto a dinner plate just a few years earlier. Now it's up to Graham to decipher Lecter's cryptic clues, crack the case before the next bad moon rises, and hopefully not end up on the skewer of another craven carnivore in the process. 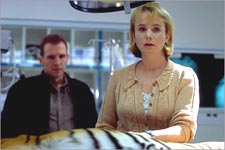 Meanwhile, the man behind the murders, Francis Dolarhyde (Ralph Fiennes), quietly goes about his unassuming work at a film processing facility. Haunted by the abuse he suffered at the hands of his late grandmother, Dolarhyde is compelled by his psychosis to kill again, and his next victim may very well be his pretty but blind co-worker, Reba McClane (Emily Watson), whom he is slowly developing a romantic attachment to. He's drawn to her because she can't see his deformity (a scar on the lip, which he hates), but how ironic that her blindness seems to symbolize the inability to see who he really is. But his convictions are tested when he finds himself falling for her.

The film has many suspensful scenes, some that make you jump a little. It all leads to a pretty climactic ending. Nobody is safe.

The biggest draw of Red Dragon is to once again see Hopkins step into the shoes of the cultured, intelligent, witty, and ultimately depraved Hannibal 'The Cannibal' Lecter. And the man doesn't disappoint. Silence Of The Lambs may have made him the world's worst gourmet, but it is hard to imagine anyone else playing this role. Now that the trilogy is done, perhaps Hopkins may be able to put aside those cannibalistic impulses for good.

As his counterpoint, Norton is credible as a determined FBI agent trying to overcome both the demons of the real world and those that haunt his psyche. Fiennes also does good work as the conflicted and mentally ill Dolarhyde without going over-the-top, as does Watson in her turn as the only person who may be able to salvage Dolarhyde's last vestiges of humanity.

ADVERTISEMENT
This page was tagged for
Red Dragon english movie
Red Dragon reviews
release date
Edward Norton, Ralph Fiennes
theatres list
Follow @fullhyderabad
Follow fullhyd.com on
About Hyderabad
The Hyderabad Community
Improve fullhyd.com
More
Our Other Local Guides
Our other sites
© Copyright 1999-2009 LRR Technologies (Hyderabad), Pvt Ltd. All rights reserved. fullhyd, fullhyderabad, Welcome To The Neighbourhood are trademarks of LRR Technologies (Hyderabad) Pvt Ltd. The textual, graphic, audio and audiovisual material in this site is protected by copyright law. You may not copy, distribute, or use this material except as necessary for your personal, non-commercial use. Any trademarks are the properties of their respective owners. More on Hyderabad, India. Jobs in Hyderabad.