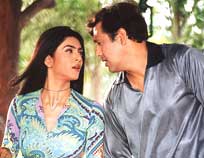 Smriti Kashyap / fullhyd.com
EDITOR RATING
5.0
Performances
Script
Music/Soundtrack
Visuals
NA
NA
NA
NA
Suggestions
Can watch again
NA
Good for kids
NA
Good for dates
NA
Wait for OTT
NA
David Dhawan is to Hindi movies what mindless cud chewing is to a cow. He manages to have a trademark when it comes to his films, ones only he has the guts to go ahead and make so that people like us can indulge in some brainlessness while we are at it.

This movie is a supreme tribute to the sheer laziness of audiences such as us who totally switch off both sides of our brain while watching a Dhawan movie. This film is made by Ekta Kapoor, the Saas of all things starting with a 'K', and is a rip-off of the Jim Carey superhit 'Liar Liar'. What Carey did to the movie, Govinda overdoes in this desi product.

The story is something like this. Govinda is a small town guy who plans on making it big as a lawyer in Mumbai, only to realize that it is easier said than done. He gets the hang of sycophancy when he meets a hotshot lawyer Anupam Kher and majorly impresses him in order to climb the slippery rungs of law in Mumbai.

Govinda gets totally taken in by the luxurious life of Kher's son-in-law who had wooed Kher's elder daughter in order to land himself in the money bin. This fuels his ambition and he soon begins plotting various dark deeds to woo Sush Sen who happens to be Beti No. 2.

The inevitable happens. Just like a Pav goes with the Bhaji, the songs and dances go with the romance, and a couple of millimeters of film later they are married.

Now Govinda wants a quick transfer to the world of riches, but poor little rich kid Sush wants the hard life, amidst squalor. This puts Raj off the scheming a bit and sidetracks the gold digging. This unexpected bit of luck puts him in the mood to majorly slog it out and soon he becomes the smoothest lawyer in town, willing to haggle, argue and lie his way through proceedings. In the bargain his soul gets sold to the Devil for a song.

Sush, the dharampatni that she is, isn't happy with the money monger pati that she has, and tries to convince him to give up his pathological lying, but to no avail. It takes a dumb shooting star and a wish by his son to make things all right.

The rest of the movie goes on a freefall from here. Thanks to the mysterious qualities of the Bollywood shooting stars, he finds himself unable to lie, and thus unable to win any cases, thus getting transformed into the once normal guy that he was.

The whole movie is standard Govinda fare. This is one movie in a long time where he exercises his dramatic skills a bit - notice how I don't say comedic. He shouts, screams, contorts his face and basically gets his suffering across. The whole movie has his pink lipstick staring at you, diffendently, in the face, and yes, he's fat, too. He has great timing, though, and goes about the movie with a disturbing nonchalance.

Sush poor Sush, I don't understand why she can't go save the world instead of prancing around Bollywood. The movie is an insult to her IQ, however much that may be. Rambha is great fun to watch, just for the sheer moment of suspense that she provides. Only her modesty holds her clothes together. All the other actors chip in their bit like solemn Golden Retrievers, all the while watching Govinda steal the show.

Govinda's peacock-like dancing carries you through the cacophony that pass as songs in this movie. Only that 'sikkidim' rip-off is a bit easy on the ears. The others just make you reach for the earmuffs and 'Restil'.

I must be careful in my summary so that I don't get pelted by Govinda fans. The movie is mindless and drifts along. The lines and the humor is mostly 'front bench - 5 buck'. 'Liar Liar' was a great movie, for the sheer brilliance of Jim Carey's histrionic capabilities. This movie tries hard, but I guess not hard enough. Its high decibel dialogue delivery and music that would put wailing banshees to eternal shame make it a bit tedious at times. No attempt seems to have been made to edit this film, which keeps stretching and growing like a tapeworm.

There don't seem to be too many people who have a critical view of this film, I guess because Govinda's cherubic charm and popularity loom large like a 75mm masala dosa over the Indian public. So get into your seat and buckle up (that's the only way you can prevent yourself from running out the theater) for the ride of this week. And when you come out the show, satisfied that you had your three hours of fun, you can just shrug away the insanity of the film and say, "Heck! Govinda is Govinda is Govinda!"
Share. Save. Connect.
Tweet
KYO KII... MAIN JHUTH... SNAPSHOT
KYO KII... MAIN JHUTH NAHIN BOLTA SNAPSHOT

ADVERTISEMENT
This page was tagged for
Kyo Kii Main Jhuth Nahin Bolta
Kyo Kii... Main Jhuth Nahin Bolta hindi movie
Kyo Kii... Main Jhuth Nahin Bolta reviews
release date
Govinda, Sushmitha Sen
Follow @fullhyderabad
Follow fullhyd.com on
About Hyderabad
The Hyderabad Community
Improve fullhyd.com
More
Our Other Local Guides
Our other sites
© Copyright 1999-2009 LRR Technologies (Hyderabad), Pvt Ltd. All rights reserved. fullhyd, fullhyderabad, Welcome To The Neighbourhood are trademarks of LRR Technologies (Hyderabad) Pvt Ltd. The textual, graphic, audio and audiovisual material in this site is protected by copyright law. You may not copy, distribute, or use this material except as necessary for your personal, non-commercial use. Any trademarks are the properties of their respective owners. More on Hyderabad, India. Jobs in Hyderabad.