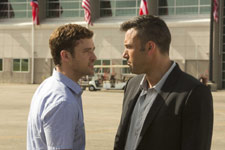 Nupur Barua / fullhyd.com
EDITOR RATING
4.0
Performances
Script
Music/Soundtrack
Visuals
5.0
3.0
5.0
6.0
Suggestions
Can watch again
No
Good for kids
No
Good for dates
Yes
Wait to rent it
Yes
Hollywood has a few standard elements needed to make their version of the commercially successful masala movies. These include FBI agents, heists, conspiracies, and, the latest to enter the market, anything that involves the Internet and that began with The Net. Add to the latter the involvement of big bucks, and you have a winner - at least, that is what the makers of Runner Runner thought. The promos showed a lot of promise, but the movie? Well.

Richie (Justin Timberlake) is a student of the Princeton University. He cannot afford the tuition, so he plays online poker, much to the chagrin of the authorities. His overconfidence soon catches up with him when he loses all his online cash and realises that he has been cheated.

Now helpless and desperate, the rather resourceful Richie does his own bit of investigation, and discovers that the poker website is hosted on a server that is located in some godforsaken island near Costa Rica. With the University personnel breathing down his neck, and with nothing else to lose, Richie heads out to Costa Rica, despite the apprehensions of his friends and others.

Once there, he manages an audience with the owner of the site, a certain not-so-honest Ivan Black (Ben Affleck). With characteristic panache, Richie confronts the man, and accuses him of stealing. Without so much as blinking an eye, Ivan admits it, and then offers to compensate for his loss. He then makes the young man another more lucrative offer - to work for him and probably own an island some day.

Richie gives in to the temptation, and becomes romantically involved with Ivan's moll, Rebecca (Gemma Arterton). And then FBI agents kidnap him and threaten him with dire consequences unless he can spy on Ivan for them.

The first thought that strikes you as you watch the movie is that the screenplay could have been more thrilling. There are glamorous locations and people galore, but it all seems so lacklustre.

Despite the obvious threat to the protagonist's well-being, the screenplay lacks gripping plot points. You are not readily absorbed, or convinced, of the film's story. At most, you become an indifferent witness to all the melodrama that unfolds on the screen.

Dialogues are corny and redundant, and everything else seems contrived, including the FBI angle. The climax, when it does arrive, is so predictable that you wonder why you did not stay at home. And the action is pretty mediocre, compared with some of the stuff that the industry has been churning out lately.

Justin Timberlake has done better work in The Social Network and some other films. Here, he seems to rattle off dialogues without understanding the emotion of what he says.

Ben Affleck looks lazy, and is not intimidating enough to be the bad guy - he makes a better director these days.

Gemma Arterton has to be content with the glamour role, since her acting chops are not really required. Her mundane lines will leave you wondering why both the men in the movie have the hots for her. The supporting cast does its best, but in a tired manner.

Costa Rica does not look like Costa Rica in the film. Whether it is the production design or the costumes, the entire look of the movie is unconvincing. The cinematography struggles with the script to churn out a presentable-looking movie. The film runs for an hour and a half, and is mercifully over before you begin squirming in your seats.

Unless you are a die-hard of fan of either Justin Timberlake or Ben Affleck, Runner Runner is the movie to avoid this weekend. If you absolutely insist on watching it, then wait for the DVD release - at least you can take a break when you want.
Share. Save. Connect.
Tweet
RUNNER RUNNER SNAPSHOT

ADVERTISEMENT
This page was tagged for
Runner Runner english movie
Runner Runner reviews
release date
Justin Timberlake, Ben Affleck
theatres list
Follow @fullhyderabad
Follow fullhyd.com on
About Hyderabad
The Hyderabad Community
Improve fullhyd.com
More
Our Other Local Guides
Our other sites
© Copyright 1999-2009 LRR Technologies (Hyderabad), Pvt Ltd. All rights reserved. fullhyd, fullhyderabad, Welcome To The Neighbourhood are trademarks of LRR Technologies (Hyderabad) Pvt Ltd. The textual, graphic, audio and audiovisual material in this site is protected by copyright law. You may not copy, distribute, or use this material except as necessary for your personal, non-commercial use. Any trademarks are the properties of their respective owners. More on Hyderabad, India. Jobs in Hyderabad.