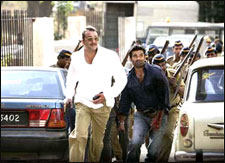 Samrat Sharma / fullhyd.com
EDITOR RATING
3.0
Performances
Script
Music/Soundtrack
Visuals
NA
NA
NA
NA
Suggestions
Can watch again
NA
Good for kids
NA
Good for dates
NA
Wait to rent it
NA
"Apun ka dhandha darr pe chalta hai," snarls Maya Dolas, dreaded gangster, played by Viviek Oberoi in one of the many scenery-chewing, throwaway moments in the film, and you can’t help but snigger. This one moment goes a long way to explain the state of affairs in Shootout at Lokhandwala, though. One, that is the abysmal standard of writing that we are exposed to all through the film. Two, when a fear-inducing gangster spews a dialog about fear itself and the audience thinks it is funny, there is definitely something wrong with the acting and direction.

See, first I got confused that this film was by Milan Luthria, while it is actually directed by Apoorva Lakhia, the young assistant director from Lagaan. I mention Lagaan, because none of the films he went on to direct himself were any good. Oh, all right, he’s the guy who made Mumbai Se Aaya Mera Dost and Ek Ajnabee. See? Though Luthria is not a great director either, he at least knows a thing or two about staging action sequences.

Lakhia, though, revels in his own mediocrity, and despite directing his third film, plunges headlong like an amateur, directing his sequences with jump cuts, fast zooms, handheld shots, steadicam pans… whatever he can get his hands on at that moment. There is no fluidity to the action, and his slipshod direction robs them of any power or impact they were supposed to have. Guns are fired because the film is about a shootout, is all.

Actually, the gangsters are most bizarre thing in a film about cops and gangsters. Gun-toting, bad-dialog-speaking unkempt gangsters you can take. What you can’t take are singing and sync-dancing gangsters who proclaim that, "In the moment, all over India, we are the bhais". That’s just all kinds of strange. Grammatically challenged sing song apart, Lakhia is content with the majority of his gangsta cats having stubble and unwashed faces. He throws in a bar dancer and a potty-mouthed mother (Amrita Singh, actually quite good in the sea of mediocrity), and thinks he is done with character development.

The cops, he keeps the most respect for. They are all cardboard cutouts, and are universally acted badly in, but the roles don’t have any nonsense. These are the big boys ready to go fry some criminals. Sanjay Dutt (as ACP Khan) keeps it real and restrained, and since his is the most dominant of screen presences, you can thank your stars for that. Because, blame the direction or the screenplay, the fact is that Sunil Shetty, Arbaaz Khan, and even Amitabh Bachchan as the lawyer Dhingra, act in the most ludicrous, over-the-top tone.

Oberoi, after so many films, still thinks that empty posturing is a substitute for good acting. The boys playing his cronies, including Tusshar Kapoor, follow their onscreen bhai in looking cool and acting stupid. If I could change one thing about the film (though there are many, really), I would pinpoint the bhais (in the moment, all over India).

Pivotal to the film is the fact that it is based on the real life shootout in a housing complex in Bombay (it wasn’t Mumbai then) in 1991. Gangster Maya Dolas and his posse are sitting counting money in a flat when ACP Khan leads a task force to eliminate them. The gangsters decide to make a last stand, and the result is a great big gory mess of blood bullets and shards.

While that is all well, most of the film revolves around the cops walking menacingly, the gangsters walking menacingly when they’re not dancing, and the assorted cast around them (Neha Dhupia and Diya Mirza in thankless roles relegated to cameos). When the shooting begins, there is some amount of thrill to be had, and an exhilarating amount of violence is unleashed, which actually is the best part about the film.

Though Lakhia tries to infuse all the tricks in the last great shootout in the film, there are still moments that are strikingly resonant, mostly because the actors themselves leave their entire hammy dialog and the bad posturing for some real life brutality. It appears to me that they trusted their action choreographer more than their director.

I know I have been cruel to a movie that does promise some amount of popcorn thrills, but I truly was disappointed at such a colossal waste of talent, money and concept. I think I want to change my mind. If there was one thing I could change about this film, it would have to be the writer-director. Go if you must. At least you’re promised some mean dancing bhais (in the moment, all over India, don’t you know).
Share. Save. Connect.
Tweet
SHOOTOUT AT LOKHANDWALA SNAPSHOT

ADVERTISEMENT
This page was tagged for
Shootout At Lokhandwala hindi movie
Shootout At Lokhandwala reviews
release date
Amitabh Bachchan, Amrita Singh
theatres list
Follow @fullhyderabad
Follow fullhyd.com on
About Hyderabad
The Hyderabad Community
Improve fullhyd.com
More
Our Other Local Guides
Our other sites
© Copyright 1999-2009 LRR Technologies (Hyderabad), Pvt Ltd. All rights reserved. fullhyd, fullhyderabad, Welcome To The Neighbourhood are trademarks of LRR Technologies (Hyderabad) Pvt Ltd. The textual, graphic, audio and audiovisual material in this site is protected by copyright law. You may not copy, distribute, or use this material except as necessary for your personal, non-commercial use. Any trademarks are the properties of their respective owners. More on Hyderabad, India. Jobs in Hyderabad.