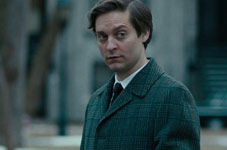 Josh / fullhyd.com
EDITOR RATING
7.5
Performances
Script
Music/Soundtrack
Visuals
9.0
8.0
7.0
7.0
Suggestions
Can watch again
Yes
Good for kids
No
Good for dates
Yes
Wait to rent it
No
Bobby Fischer (a winning portrayal by Tobey Maguire) once quit a world championship because he figured out that the Soviets were playing a team game to make it statistically impossible for Fischer to claim the championship. If, we can argue with sufficient weight to the counterfactual, his opponents had played fair games, he could have gone on to be the youngest world chess champ ever.

And then years later, when he's again beginning to dream of a world championship, he threatens his lawyer that he wouldn't play if he wasn't going to be paid obscene amounts of money. Fantastical, it appears - a genius being so fickle and so stuck up about something as material as money. But then, that is what actually happened.

What is indeed fantastic is that the writer Steven Knight and the director Edward Zwick largely stuck to things that happened instead of playing into rife and largely incorrect genius stereotypes.

Fischer was indeed a genius. He is believed to be the greatest chess player of all time, and is acknowledged to have changed the game forever, both in strategy and format. However, his list of achievements (it is as long as it gets) needn't make a movie - at least not as much as the drama surrounding them. It is this drama that Knight and Zwick latch on to.

For one, he played in a time when the bipolar world was witnessing the Cold War. Fischer's match with the then world champion Boris Spassky (Liev Schreiber) was projected as the Free World's battle against Communism. And ironically, Fischer himself was kept under FBI surveillance for being a potential communist link (his mother came to America from pre-Stalinist Russia). Right from his childhood he was aware of being followed, which eventually pushed him into severe paranoia. He'd tear open the phones in his hotel room to check if they were bugged. He feared for his life as he was convinced that the USSR would not hesitate to kill him to maintain the symbol of their supposed intellectual supremacy. To add to this, he knew the chess federation was underpaying him taking advantage of his age (he was fifteen when he toured the world) and lack of support. And he was keen on being given royal treatment worth his talents.

The material is all there. When you take a high-functioning mind, generously provide it with such insecurities and then put it on a chessboard which is quite literally a battlefield, drama is bound to emerge. Fischer never trusted anyone, including the two people he had most contact with - his lawyer Paul Marshall and his coach Bill Lombardy (Michael Stuhlbarg and Paul Sarsgaard, both very good). And so Pawn Sacrifice is as much their story because of how they had to deal with Fischer's tantrums and even the unreasonable accusations he would levy on them in his paranoia.

Pawn Sacrifice is possibly the best biopic to have released in recent times. It doesn't make the mistake of telling the protagonist's whole life story. It builds a foundation after which it completely focuses on the most dramatic time of Fischer's life - the world championship of 1972. The tension is always palpable, and Maguire's sensitive performance attracts us to Fischer's curious personality whether or not we approve of the man.

The soundtrack and score are quite wonderful. They are jolting at times, and that works in favour of the tautness of the proceedings on screen. The cinematography along with the editing registers a thorough win. Fischer may have been paranoid for no good reason, but the paranoia itself registers as a very real and valid concern when the frames get claustrophobic and transition shiftily.

The writing needs to be established as a benchmark for biopics. It dramatises fact but doesn't mess with it as is common practice nowadays. Alan Turing was a witty and friendly man whose entire office knew he was gay unlike what The Imitation Game would have us believe. John Nash never saw imaginary people and he was kicked out of the Pentagon for being gay. Something that A Beautiful Mind will not tell you.

Practically every genius of late is written as a clutch from a bag of traits like socially awkward, arrogant, persecuted, fuzzy soft inside and lovable. Things go off the roof when it comes to fictional geniuses like Sherlock Holmes and Sheldon Cooper. Genius is almost always linked to a mental disorder - sociopathy, schizophrenia and even Aspergers. Bobby Fischer, too, might have had mental illness - he might have been manic depressive - but the key issue the movie focuses on, his paranoia, is founded on his experiences rather than some nonsensical connection between genius and mental illness.

There may have been a million flaws with Fischer. But he was a remarkable man. And he deserved a film as good as this. When you think about it you'll see how he is like a piece on the chessboard himself. Not the pawn though, the king. Just like the king, he was severely limited, but he made his side run around and even sacrifice themselves to get things to work for him. And he made it all worth it by winning, which just meant survival for him.
Share. Save. Connect.
Tweet
PAWN SACRIFICE SNAPSHOT 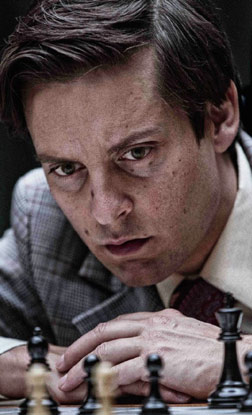 ADVERTISEMENT
This page was tagged for
Pawn Sacrifice english movie
Pawn Sacrifice reviews
release date
Tobey Maguire, Peter Sarsgaard
theatres list
Follow @fullhyderabad
Follow fullhyd.com on
About Hyderabad
The Hyderabad Community
Improve fullhyd.com
More
Our Other Local Guides
Our other sites
© Copyright 1999-2009 LRR Technologies (Hyderabad), Pvt Ltd. All rights reserved. fullhyd, fullhyderabad, Welcome To The Neighbourhood are trademarks of LRR Technologies (Hyderabad) Pvt Ltd. The textual, graphic, audio and audiovisual material in this site is protected by copyright law. You may not copy, distribute, or use this material except as necessary for your personal, non-commercial use. Any trademarks are the properties of their respective owners. More on Hyderabad, India. Jobs in Hyderabad.