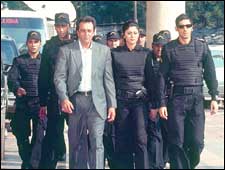 EDITOR RATING
6.0
Performances
Script
Music/Soundtrack
Visuals
NA
NA
NA
NA
Suggestions
Can watch again
NA
Good for kids
NA
Good for dates
NA
Wait to rent it
NA
Siddhanth Dheer (Sanjay Dutt) has the most challenging job in India. He works with Aditi Kumar (Shilpa Shetty), who wears clothes so tight, we had to write a special program to calculate the tensile stress at the seams. As if that weren't enough challenge, he also heads the Anti-Terrorism Center of India at New Delhi, which is the central place to get in touch with if you have witnessed a terrorist attack or are planning one.

One day Siddhanth gets to know that someone unidentified is planning an attack somewhere unspecified which will kill an as-yet-undecided number of innocent people. After searching on Google to see if he can get any more information, he decides that the best way to tackle this is to pre-empt the terrorists and launch an attack himself - no, not on the innocent people, but on the terrorists.

So he calls his crack team, consisting of Shashank Dheer (Abhishek Bachchan), Aditya Singh (Zayed Khan) and Aditi, and tells them that they have to go to Canada. You're wondering about how that seems to be such a simple solution to a global menace, when you realize that there is actually something he needs them to do in Canada - there's a key man in the main villian's clan there, Mehdi (Pankaj Kapur), who he wants his boys to kidnap, and get information about what this act of terror is that is being planned.

So Shashank and Aditya leave for Canada, and meet Neha (Esha Deol), Siddhanth's charge d'affairs there, who spends so much time making moves on Shashank, she looks like a workaholic. They also run into Danish (Suniel Shetty), a Canadian police officer who is going through a divorce for the most common reason - he's married.

Together they kidnap Mehdi, who tells them about the ruthless kingpin Jaamwal (Gulshan Grover) who's masterminding the whole attack, scheduled to happen on May 10 (hence Dus). The target is to kill about 25,000 innocent people - or at least 25,000 people, since it is hard to ascertain if all the 25,000 people are innocent.

It appears to our trio that that is a rather large number, and if the movie wanted 25,000 innocent people to die, it would've just given Dia Mirza a larger role. So they take on the terrorist ring, helped ably by Siddhanth who himself comes to Canada, and the film hurtles towards a plebian climax.

The film is primarily candy-floss and chic packaged in some Grand Guinol thrills. With a starcast like this one has, you can't go wrong. The plot does have its moments in some twists of unbridled self-worth, but it also has as many holes that it wimps out of off. All lead actors deliver, but it's mostly Shilpa Shetty for the men and Abhishek Bachchan for the women that make the flick user-friendly. All other women make blink-and-you-miss-them appearances.

The visuals, especially the Canadian locales, are full of chutzpah. The film has the stamp of RGV all over it in cinematography and editing, and the background score revs you into resonance. The title song is obviously a dance-floor hit, if the reaction of the mostly teeny-bopper crowd in Prasad's is anything to by. They seem to like Abhishek Bachchan, too. What does that sound like to you?
Share. Save. Connect.
Tweet
DUS SNAPSHOT

See Dus full details
DUS USER REVIEWS
1 - 5 OF 5 COMMENTS
POSITIVE  |  NEGATIVE |  NEWEST  |  OLDEST  |  MOST HELPFUL  |  LEAST HELPFUL
USER RATING
8.0
29 USERS
Performances
Script
Music/Soundtrack
Visuals
NA
NA
NA
NA
Can watch again - NA
Good for kids - NA
Good for dates - NA
Wait to rent it - NA
Alidutt Alibaba on 6th Mar 2006, 10:54am | Permalink
ih sanju baba my brother of sunjadutt
RATING
6
Rupi K.k on 19th Jan 2006, 10:54pm | Permalink
dus waz a wow movie...i luvd it loadzz..except dat abishek dies..awww..
RATING
10
Blah Lala on 24th Nov 2005, 4:55am | Permalink
any one who curses this movie has either not watched it or focused on either abhi or shilpa shetty for so long, they forgot to watch the movie. Any idiot would know this is the BEST movie BOLLYWOOD EVER CREATED. If not, well, watch the movie again.
RATING
10
Rahul on 6th Oct 2005, 6:14am | Permalink
Are u crazy? Which "Indian Intelligence" has that much manpower and/or technology let alone paisa to go to Canada to track down a idiot WITHOUT any knowledge or help of the other govt.? Other than Abhi, this movie is a disASSter.
RATING
4
Nalini G V on 9th Jul 2005, 4:51pm | Permalink
Welcome back after the break. In this segment of Movies Maverick we present to you an interview with the cast of DUS.

Abhishek Bachchan: I haven’t seen the movie as yet. (Thank GOD! Wouldn’t do the next if I did!)

Esha Deol: (Pouts or whatever she is trying to do...) I told Sinha to show my eyes. They are the ones you can look at in me and he covered them with my hair...

Shilpa Shetty: Gosh, so many clothes; was feeling heavier through out!!!

Pankaj Kapoor: Thought Sanjay in the movie will pull me back into mainstream acting. But Dus might put him out of itL

Diya Mirza: It’s a different movie for me to work in. I was portrayed as a helpless doll in all my previous movies. But in this movie I play the character of a useless help less and brainless doll in pink and red. Am satisfied with what I have done.

Zayed Khan, we didn’t bother with.

Height of bad cinema gone worse. Had an inkling while watching the movie that Sanjay Dutt did the film to wash away his sins. You will too, 'cos even GOD would be impressed by your passion for Indian cinema if you sit through this piece of incoherent movie making.

Let me get to the point - the movie is bad because of bad editing and disinterested direction, like the part in which Sanjay Dutt's eyes are stinging and it is not clear what happened and why any terrorist group would plant an ID on the car with explosives. The storyline was good, but the direction undid a good story. Shilpa as usual looked stunning, but with no appropriate dress sense, her ability to contain audiences was lost. The item song too didn’t help. Not at all ;-(

Now to the movie: The story is about the Anti-Terrorist Cell handling a case with absolutely no information other than some isolated leads - like there is something BIG in the offing on 10 May, that’s why DUS. Hey, guess the rest yourself. Someone must tell Esha that it can only be Bipasha who can carry off any thing and I love to be the one it.

There are some aspects where minor improvements would have helped save the movie. Like the lighting. The movie is not a dark one, and a misplaced attempt to make it look like one spoiled the professional touch stars like Suniel Shetty, Shilpa Shetty and Sanjay Dutt would have given. Putting a veteran star like Pankaj Kapoor and an imbecile looking Zayed Khan in the same frame was criminal.

The director probably wanted to recreate the magic of Dhoom. Abhishek calm and controlled and Uday Chopra his minion. But Zayed Khan, though he could look like a cartoon effortlessly, could not act like one. Sorry, couldn’t act at all. Please will someone tell him that pretending the camera is not present is not acting??? The movie is a little better in the later half. Listen to me skip the first half and if you watch only the second then DUS will not let you lose hope in Indian Cinema.

After the movie I realized why the name DUS (speaking of hidden meanings crony). Guess the director knew only DUS minutes of the movie was worth watching. 4 min in climax, 2 min of Shipa’s tattoo and the rest 3 min of introduction song. Did I get my calculation wrong? Apparently I’m not the only one..."

ADVERTISEMENT
This page was tagged for
Dus hindi movie
Dus reviews
release date
Sanjay Dutt, Suniel Shetty
theatres list
Follow @fullhyderabad
Follow fullhyd.com on
About Hyderabad
The Hyderabad Community
Improve fullhyd.com
More
Our Other Local Guides
Our other sites
© Copyright 1999-2009 LRR Technologies (Hyderabad), Pvt Ltd. All rights reserved. fullhyd, fullhyderabad, Welcome To The Neighbourhood are trademarks of LRR Technologies (Hyderabad) Pvt Ltd. The textual, graphic, audio and audiovisual material in this site is protected by copyright law. You may not copy, distribute, or use this material except as necessary for your personal, non-commercial use. Any trademarks are the properties of their respective owners. More on Hyderabad, India. Jobs in Hyderabad.