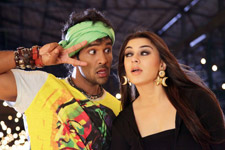 Ravi Kandala / fullhyd.com
EDITOR RATING
5.0
Performances
Script
Music/Soundtrack
Visuals
7.0
5.0
4.0
4.0
Suggestions
Can watch again
No
Good for kids
Yes
Good for dates
No
Wait for OTT
No
The Manchu family is to Tollywood what the Bhatt family is to Bollywood. They have their team of in-house actors, producers and possibly a few directors in the making, and post Uu Kodatara Ulikki Padatara, a complete readymade set for making their films. The family also has good relationships all around the industry, and is capable of churning out, with decent budgets and at a fast pace, movies that will be remembered for as long as they are in the theatres, and that will also make a little money in the process.

Denikaina Ready, starring Manchu Vishnu Vardhan Babu, is totally shot in and around the Gandharva Mahal set earlier used for UKUP, and stars a number of the actors who were used in the earlier movie. The film is about two warring families belonging to Narasimha Naidu (Prabhu) and Basha (Suman). Basha married Naidu's sister, Saraswati (Sita), two decades back, without family consent, because of which Naidu chopped off Basha's leg. This has led to a never-ending feud between the families.

Enter the son of Saraswati and Basha, Suleman (Vishnu), who promises to bring the two families together to make his mother happy. It is, of course, convenient that Naidu has a young daughter Sharmila (Hansika Motwani), who Suleman can fall in love with and create situations for a few songs.

This barebones plot is then propped up by the entire comedian brigade of Tollywood, including Brahmanandam, M S Narayana, AVS, Dharmavarapu, Master Bharat and Ananth.

Denikaina Ready is a flick with a simple, unpretentious storyline that is fairly well-treated. Only, the fact that the director's earlier flicks were with Allari Naresh is evident in the treatment of this tale. And with the entire movie being shot in two or three locations, it is clear that it was made on a tight budget.

The first half of the movie takes a while to get going, with a few jokes falling flat, but once the premise of Suleman turning into Krishna Sastry kicks in, the film picks up pace, with the laughs coming in at regular intervals. The second half runs along expected lines, but a regular dose of comic situations again prevents boredom from kicking in. However, the fact that some of the comedy seems laboured, and the completely predictable storyline, keep the movie from entering the above-average zone.

Another factor that decidedly works against the movie is the Gandharva Mahal set. If you have watched Uu Kodatara Ulikki Padataraa, tedium sets in easily as you see the same locations here again and again. It takes a special kind of director to be able to use a set effectively, and Nageswar Reddy is definitely not that.

Vishnu does well in both characters, Krishna Sastry and Suleman. He has improved his diction considerably, works hard at his dances, and performs stunts with consummate ease. Hansika Motwani tries hard to sprinkle glamour, but makes "heavy" weather of her role due to her weight issues. The comedians all do well, Brahmanandam and M S Narayana particularly so. A lot of the other actors act as fillers, with not much screen time.

The music is ho-hum, with the songs being of the cigarette-break variety. Four songs by Chakri and a single one by Yuvan Shankar Raja appear at appropriate times in the movie, and are shot like music videos, adding little substance.

With few releases in the next few weeks, Denikaina Ready will probably turn out to be an average grosser. One piece of advice, though - do not compare Denikaina Ready with Dhee; the latter was a good Srinu Vaitla comedy, and it is best that you go into the theatres for Denikaina Ready without expecting too much.
Share. Save. Connect.
Tweet
DENIKAINA READY SNAPSHOT 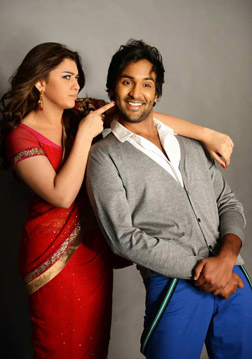 ADVERTISEMENT
This page was tagged for
denikaina ready reviews
denikaina ready full movie watch online
denikaina ready telugu full movie watch online
denikaina ready full movie watch online in telugu
Denikaina Ready telugu movie
Follow @fullhyderabad
Follow fullhyd.com on
About Hyderabad
The Hyderabad Community
Improve fullhyd.com
More
Our Other Local Guides
Our other sites
© Copyright 1999-2009 LRR Technologies (Hyderabad), Pvt Ltd. All rights reserved. fullhyd, fullhyderabad, Welcome To The Neighbourhood are trademarks of LRR Technologies (Hyderabad) Pvt Ltd. The textual, graphic, audio and audiovisual material in this site is protected by copyright law. You may not copy, distribute, or use this material except as necessary for your personal, non-commercial use. Any trademarks are the properties of their respective owners. More on Hyderabad, India. Jobs in Hyderabad.