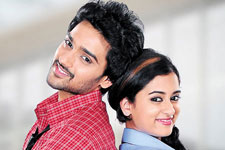 Kritika Deval / fullhyd.com
EDITOR RATING
4.5
Performances
Script
Music/Soundtrack
Visuals
5.5
4.5
5.0
6.0
Suggestions
Can watch again
No
Good for kids
No
Good for dates
Yes
Wait to rent it
Yes
A case of mistaken identities is always a reliable provider of rom-com fodder. Except when those involved cannot at any moment figure out why things are happening.

Lovers works as though it is set in an alternate universe where Agents Jay and Kay went on a rampage with those flash thingies (neuralyzers, if you have to be pedantic about it) that make people forget. Not a single character seems to have an idea about why they are doing something, anything, which seems like a perfectly reasonable way to behave.

The hero, Siddhu (Sumanth Ashwin), gets dumped by two girls in school (Tejaswi, Shamili) because of the intervention of yet another girl called Chitra (Nanditha), who HATES "love". Why does she HATE "love"? She doesn't seem to know either.

Years later, Siddhu spots a beauty at a temple and immediately goes on to song-and-dance stalk her for an interminable amount of time. When he talks to his mother (Anitha Chowdhary) about his instantaneous obsession, her sage advice is to tell him that he was only infatuated with those other two girls with whom he had conversations, but that this woman must be his one true love and that he should continue with the stalking. Again, nobody knows why.

Then, it turns out that this babe studies in this college, and, surprise, surprise, happens to be Chitra, who is still after the love lives of her own friends, because Freud, apparently, and also dem chicks b crazy, y'all!. And Siddhu has now turned into an instrumental-music-listening temple-visiting good boy called Sri Ram, in order to woo Chitra for himself, and into leaving his friend's (Sai) girlfriend (Chandni) alone.

Are you confused? Well, good. So are we.

One thing that saves the film is the fact that it keeps you asking, what next. And the answer is consistently crazier than anything your imagination can come up with. At various points in the movie, you will come across disembodied harassment, at least five different "mistaken" identities, a need to hire a crazy person at a crazy person facility, and a shopping "flirt" test (remember, at no point should you ask "why").

A few moments, especially those involving Sapthagiri, are genuinely funny. But then, for every minute with an honest chuckle the film gives you, you also get seemingly endless minutes of Sumanth Ashwin staring at Nandini with variations of just one song in the background. As you may have imagined, that gets tiring fast.

Sumanth Ashwin gives a very ignorable performance which cannot be ignored simply because he takes up so much of the time that other more entertaining characters could've used to actually entertain you. Nandini is very cute in a real way, rather than a Telugu movie heroine way, and tries to deliver a believable character despite the inconsistencies. Sapthagiri is hilarious for the most part. Chandni and Sai are fun to watch where the plot allows it, which is admittedly rare. This goes for the rest of the cast.

The cinematography is competent. The editing department seems to have gone to sleep halfway through, though. The music is mediocre.

In all, not a bad way to spend a couple of hours in your long weekend (yay, Telangana census!), but make sure to get seats that make it easy for you to walk in and out.
Share. Save. Connect.
Tweet
LOVERS SNAPSHOT

ADVERTISEMENT
This page was tagged for
Lovers pic from telugu
telegu lovers hero
Lovers telugu movie
Lovers reviews
release date
Follow @fullhyderabad
Follow fullhyd.com on
About Hyderabad
The Hyderabad Community
Improve fullhyd.com
More
Our Other Local Guides
Our other sites
© Copyright 1999-2009 LRR Technologies (Hyderabad), Pvt Ltd. All rights reserved. fullhyd, fullhyderabad, Welcome To The Neighbourhood are trademarks of LRR Technologies (Hyderabad) Pvt Ltd. The textual, graphic, audio and audiovisual material in this site is protected by copyright law. You may not copy, distribute, or use this material except as necessary for your personal, non-commercial use. Any trademarks are the properties of their respective owners. More on Hyderabad, India. Jobs in Hyderabad.