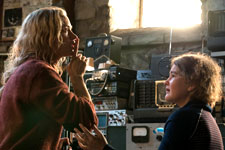 T J Reddy / fullhyd.com
EDITOR RATING
8.5
Performances
Script
Music/Soundtrack
Visuals
9.0
9.0
7.0
6.0
Suggestions
Can watch again
Yes
Good for kids
No
Good for dates
Yes
Wait to rent it
No
Age 10: I can do better than my parents. They have all this money and all this time and don't have to go to school or do homework. If I had 1,000 rupees, I'd run away and start a new life because I'd be so rich.

I was a pretty stupid child.

Age 20: Alright, you were young and had your first child at 24. You had to do what you had to do to run a family. But given the same circumstances, I'd have done better. You guys just didn't know what was important.

I didn't know anything about anything.

Present day: Could I have done any better? Could they have done any better? Did they do the best they could as they prepared themselves and their children for the harsh realities of the world? They didn't have all the answers. No one does. They were winging it and luckily stumbled onto some good decisions.

I learnt to appreciate what I had rather than complain about what I didn't.

These are some of the most basic themes John Krasinski's directorial A Quiet Place addresses. It is a clever allegory about the triumphs and terrors of parenting masquerading as a creature feature.

The Abbotts - Lee (John Krasinski), Evelyn (Emily Blunt), Regan (Millicent Simmonds) and Marcus (Noah Jupe) - are one of the very few families that survived a global apocalypse caused by creatures that responds to and kills any organism that makes the slightest bit of noise. (And I instantly wished these creatures existed in movie theatres as they'd keep those pesky texters and talkers quiet.)

The family of four, with a fifth on the way, are holed up in a relatively comfy house but are constantly under threat by the creatures and hence play their board games on carpets, take a full evening to do their laundry, and cover their paths with sand so as to not alert the creatures to their footsteps. However, all these precautions can only keep one safe for so long. The world outside is merciless and the characters are only human, and as we know, to err is human - and the creatures are no divine beings. And soon, the family finds itself banding together to protect themselves from the onslaught of the creatures after one fateful incident.

Parental overtones and political undertones aside, A Quiet Place is an excellently told story barring a few clichéd moments. While most horror films from the '00s to the '10s live and die by the rinse and repeat jump scare tactic, A Quiet Place rids itself of this crutch by virtue of its setting. The film's hook defines its identity to such a degree that the audience in my theatre would not make a single sound or even breathe loudly themselves, as they witnessed to some of the tensest moments ever put to celluloid.

The film takes its first half-hour to establish its characters, their motivations and their relationships with the world and each other with little to no dialogue. A wise and well-respected director once said, "If you want to know how well a film is directed, turn the sound off and see how well you understand the story." A Quiet Place takes this philosophy to heart and tells a large chunk of its story visually. Through many an eye glance, clever hand signals, a metric ton of detail put into its sets and some excellent acting, Krasinski and his team get their audiences to connect to the primal and progressive story the film tries to tell.

Speaking of acting, there is a reason Emily Blunt is the top-billed actor in this film, and it is not because she's the director's wife. Blunt brings poise, grace and a genuine sense of badassery to the screen while she simultaneously elicits genuine empathy from an audience. Her wholly satisfying arc which ends as she learns her potential by teaming up with her daughter is earned and applause-worthy. Her character combines both the masculinity of a protective parent with the inherent femininity of a female, and you'll just be unable to stop gushing about this performance and character.

While Blunt is the chewy emotional centre of the film, Krasinski, the director who also plays the main lead, is its hard crust. A man whose directing is almost on par with his beard game, Krasinski's character is a simple man with simple goals. It is this simplicity that makes him so important to the story being told. He is a man trying to do the best for his family, and working towards said better life by teaching himself new skills.

His children's disapproval of his efforts is not played with a cavalcade of clichés. Instead, the children are treated as fully formed characters who bear crosses of their own. The final sequence of the film gives the kids their catharsis as they embrace roles that weren't intended for them but which they took up as that was what they were capable of. If only Simmonds' performance matched this clever bout of storytelling at every beat - we would have been looking at an all-time bullet-proof classic.

Another aspect of the movie that takes away from its overall impact is its choice of music. While the primary score is unsettling in all the right ways, the film veers away from its concept from time to time by incorporating a hefty dose of jump scares. The script needs to share the blame for some of these instances. These moments unmistakably stick out simply because the world the movie sets up does not sanction such buffoonery.

What it does sanction are a few instances of actual spoken dialogue and even fewer instances of screaming. These instances can be counted on one hand, and each of them holds a high degree of significance and is expertly shot and scored.

Then again, barring these moments, the film's overall look is quite derivative of many a post-apocalyptic film that came before it. The choice of shots for scenes that do not involve much action toggles between inventive and repetitive. These choices don't make the film bad, but they do induce the sense of running a three-legged race. One of those legs is not like the others.

Even though one of the legs can't keep up, the film masks this deficiency with clever storytelling and sheer ambition. Unlike a few entries into a certain multi-picture horror franchise, A Quiet Place is horror filmmaking made for a mass audience at its finest. Its storytelling is both simple and complex, and like with a kaleidoscope, looking at it from multiple angles might bring about a new appreciation for it every single time.
Share. Save. Connect.
Tweet
A QUIET PLACE SNAPSHOT 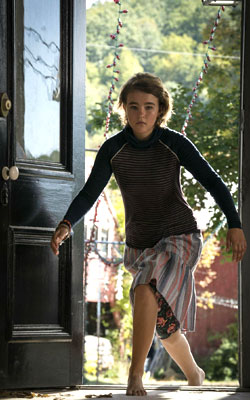 ADVERTISEMENT
This page was tagged for
A Quiet Place english movie
A Quiet Place reviews
release date
Emily Blunt, John Krasinski
theatres list
Follow @fullhyderabad
Follow fullhyd.com on
About Hyderabad
The Hyderabad Community
Improve fullhyd.com
More
Our Other Local Guides
Our other sites
© Copyright 1999-2009 LRR Technologies (Hyderabad), Pvt Ltd. All rights reserved. fullhyd, fullhyderabad, Welcome To The Neighbourhood are trademarks of LRR Technologies (Hyderabad) Pvt Ltd. The textual, graphic, audio and audiovisual material in this site is protected by copyright law. You may not copy, distribute, or use this material except as necessary for your personal, non-commercial use. Any trademarks are the properties of their respective owners. More on Hyderabad, India. Jobs in Hyderabad.