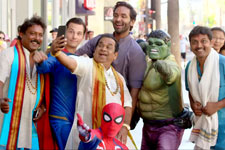 Veturi Sarma / fullhyd.com
EDITOR RATING
3.0
Performances
Script
Music/Soundtrack
Visuals
4.0
1.0
2.0
5.0
Suggestions
Can watch again
No
Good for kids
No
Good for dates
No
Wait for OTT
Yes
When a film misses its release date a few times, it is usually bad news for everyone involved. G Nageshwar Reddy's last film Intlo Deyyam Nakem Bhayam struggled to find a release even after its hoardings were splashed all over the city. The film was expectedly a dud as will be vouched for by the few who saw it. Reddy's latest Achari America Yatra fares no better, and makes it the fifth dud in a row for the director. The film remains steadfastly boring throughout its length, and that is us being nice to the makers.

Appalachari (Brahmanandam) and Krishnamachari (Vishnu Manchu) are two happy-go-lucky priests performing a nine-day homam for a bunch of goons (Pradeep Rawat, Raja Ravindra & co). Why 9 days, you might ask - that's mostly because it gives Krishnamachari lot of time to stare at the navel of Renuka (Pragya Jaiswal). However, before he can profess his love for her, the goons' father (Kota Srinivasa Rao) dies due to suffocation from the smoke emanating from the homam, and the priests are held responsible.

So the younger achari tricks the elder one into fleeing the place for the US, but it turns out that it was all part of his plan so that he can re-unite with Renuka who has already gone to the same country, where she is to marry her cousin and Pradeep Rawat's son Vicky (Thakoor Anoop Singh) under duress since the bad guys have kept her grandfather's ashes locked in their cupboard, and she wants to immerse them in the Ganga.

The acharis fool around with Vicky, trick Rawat into getting arrested by the cops in the USA, and carry Renuka's grandfather's ashes to the Ganga, while everyone in the audience yawns their way to the end.

Darling Swamy's script is a mishmash of every cliché you ever saw in a Telugu comedy film, with a bit of Chennai Express thrown into the mix for good measure (read the ashes). The writing is devoid of any of the imagination or quirky characters necessary for a comedy. Towards the end it gets so utterly lazy that a character named Pattapagalu Padma Rao (Pridhvi) repeats his dialogue verbatim about 4 times trying to make it funny. G Nageshwar Reddy's direction is equally listless - almost as if he was trying to match Swamy in incompetence.

Vishnu Manchu and Brahmanandam don't get anything meaty from the script, and so they just get dressed and turn up for every scene. Pragya Jaiswal needs mainly to look pretty, and gets to do little by way of emoting. Pradeep Rawat will bore himself if he watches this film. The supporting cast includes veterans like Kota Srinivasa Rao, Posani Krishna Murali, Prudhvi and Surekha Vani, but they just make up the numbers.

The visuals are just about par, and for a film that is set in the US, there isn't any US in it really. Most of it is shot in and around Hyderabad, with just a couple of songs and montages shot in the US. Thaman scores the film like he was doing it as a favour to the makers, filling it with weird background music and forgettable songs.

For all those who assume that anything featuring Brahmanandam in a full role must be a laugh riot, Achari America Yatra is going to be a great reality check.
Share. Save. Connect.
Tweet
ACHARI AMERICA YATRA SNAPSHOT 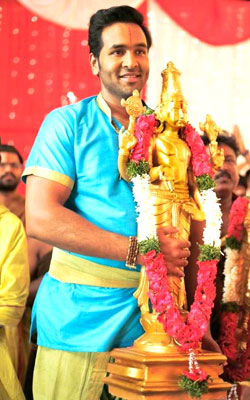 ADVERTISEMENT
This page was tagged for
Achari America Yatra telugu movie
Achari America Yatra reviews
release date
Vishnu Manchu, Brahmanandam
theatres list
Follow @fullhyderabad
Follow fullhyd.com on
About Hyderabad
The Hyderabad Community
Improve fullhyd.com
More
Our Other Local Guides
Our other sites
© Copyright 1999-2009 LRR Technologies (Hyderabad), Pvt Ltd. All rights reserved. fullhyd, fullhyderabad, Welcome To The Neighbourhood are trademarks of LRR Technologies (Hyderabad) Pvt Ltd. The textual, graphic, audio and audiovisual material in this site is protected by copyright law. You may not copy, distribute, or use this material except as necessary for your personal, non-commercial use. Any trademarks are the properties of their respective owners. More on Hyderabad, India. Jobs in Hyderabad.