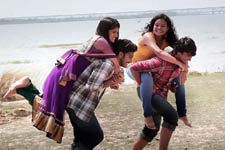 Deepa Garimella / fullhyd.com
EDITOR RATING
3.5
Performances
Script
Music/Soundtrack
Visuals
4.0
2.0
4.0
4.0
Suggestions
Can watch again
No
Good for kids
No
Good for dates
No
Wait to rent it
No
Some things can be sold only by complete deception. Like this film, Telisi Teliyaka. The bright and colourful posters make it look like a frothy campus romance with a hint of hormone-induced hanky-panky. You go into the theatre expecting a semi-amateur movie centred around teens and their adolescent yearnings. What can be worse, you ask yourself, apart from the fact that you're actually considering watching this?

As it turns out, this is what is worse.

It isn't entirely clear what Telisi Teliyaka is, but we roughly gathered that it tries to be a sort of horror-thriller. The film spends one hour in setting up the premise, which is that of four young people going to a deserted island and getting stranded there. Suri-Vaishu and Satya-Nani are two couples who decide to bunk college and celebrate Vaishu's birthday on a little island off the banks of Rajahmundry. They get there on a boat, arrange for the boatman to come back at 5pm, and spend the day having harmless fun.

But they are not alone on the islet. Someone there is protecting them, while not letting them leave. Trouble starts when Vaishu realizes that she is missing a chain.

Telisi Teliyaka is a pretty arbitrary movie. It a very weak plot, one that even James Cameron cannot turn into a half-decent movie. The two-hour-long film has one hour of completely pointless banter, and one hour of mildly scary moments. The "ghost" in the film is benign, and doesn't harm anyone. To make things worse, there are red herrings aplenty. Heck, we've seen GHMC ads that are scarier.

By the end, you don't even know what the point of the adventure on the island was. The only interesting thing that happens to the foursome is that the ghost has stopped time for them (because it/he wants them to stay on the island till daybreak... look, are we really getting into this?). So even after they spend a day and a night on the deevi, it's still "last evening" when they return home.

Meanwhile, the youngsters are busy being college kids and couples, and their chitchat seems pretty realistic. To the film's credit, none of this is sleazy.

Overall, there is no real craft on display here. The writing is ineffective, and the dialogues contrived. The actors, all new faces, do what they have to, mildly retaining their dignity in a film that has nothing going for it.

This is a low-budget effort, and the bland visuals of the island and the Godavari are proof. None of it remotely inspires any intrigue or looks mysterious. There are a couple of songs, too, but these sound pretty okay.

Telisi Teliyaka can be watched only under its makers' supervision. Catch it only if you promise us you won't harm yourself.
Share. Save. Connect.
Tweet
TELISI TELIYAKA SNAPSHOT 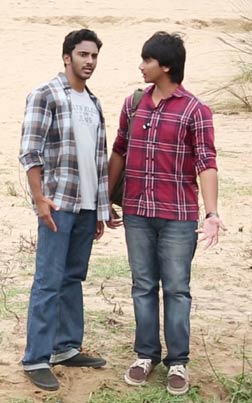 ADVERTISEMENT
This page was tagged for
Telisi Teliyaka telugu movie
Telisi Teliyaka reviews
release date
Geetanand, Krishna
theatres list
Follow @fullhyderabad
Follow fullhyd.com on
About Hyderabad
The Hyderabad Community
Improve fullhyd.com
More
Our Other Local Guides
Our other sites
© Copyright 1999-2009 LRR Technologies (Hyderabad), Pvt Ltd. All rights reserved. fullhyd, fullhyderabad, Welcome To The Neighbourhood are trademarks of LRR Technologies (Hyderabad) Pvt Ltd. The textual, graphic, audio and audiovisual material in this site is protected by copyright law. You may not copy, distribute, or use this material except as necessary for your personal, non-commercial use. Any trademarks are the properties of their respective owners. More on Hyderabad, India. Jobs in Hyderabad.