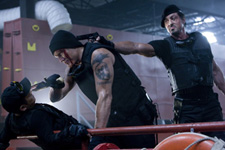 Samrat Sharma / fullhyd.com
EDITOR RATING
5.5
Performances
Script
Music/Soundtrack
Visuals
6.5
4.5
6.0
7.0
Suggestions
Can watch again
No
Good for kids
No
Good for dates
No
Wait to rent it
Yes
Last month, I got it in my head that I wanted a lollipop. And you know what? The lollipop was awesome. As an adult in his 30s who does not get to exercise as often enough as he would like, this was a rare treat, and a throwback to the times when I was a kid and devoured these things like crazy. It felt great, and I let the nostalgia wash over me. The missus saw this, and, as a joke, bought me one of those mammoth ones that don't even taste as good to work on. I immediately regretted opening the wrapper. It was too much, it was bad for me, and it reminded me of why I stopped eating the damned things.

This is what I now feel about The Expendables 2. The first one was awesome, because it was these old actors taking a bow, a film fueled with '80s nostalgia and memories of us as 10-year-old kids watching these dudes kick the living crap out of similarly 'roided-out man-monsters.

The second part, where they got the guy who started his career with Con Air, no less, to direct, reminds you why those films were bad - it's as xenophobic, senseless and devoid of any intelligence. It's an attempt to make a franchise out of what was truly a one-off novelty, and it fails miserably - not because it is any more of a mess, but because we don't want any more.

To be precise, I still think practical effects-laden action films with genuine fights, as opposed to a CGI fireworks display, are worthy of our attention and money. The Expendables 2 parades geriatrics referring to themselves as old dinosaurs, and all the action in the world does not take away from the meaninglessness of it all.

Bruce Willis comes in again as the "shady" guy who gives these guys missions, this time asking them to recover something that is never important to the film, and Stallone, Crews, Statham etc. immediately agree. JCVD - the muscles from Brussels - laughingly named Villain - steals said thing and kills one of Stallone's crew. So they go back and destroy an entire city with explosions and fist-punching.

That is all you need to know of the plot, by the way. There is no more. All that happens in between these laughable beats is steroid-laden men punching and shooting other men-apes like themselves. It's a sight we saw a couple of years ago, but if you're jonesing for some more, it doesn't get any more fist-punchy than this.

It's a film with troubling sexism, and heady after drinking its own swill about manliness, often fascist. But the action is fairly decent. Half the crew here can't lift the guns they strap on, but it's still fairly CGI-free, and laden with the best-in-class practical effects and explosions. Obviously Statham is amazing to watch as he kung-fus his way through the entire population of a small country, but the rest make convincing grimaces as their old bodies seemingly accomplish appropriate genocide.

If the action in the trailers makes you want to yell, "Hell Yeah" and punch walls, you should go watch this film. Remember though, candy is awesome, but also rots your teeth.
Share. Save. Connect.
Tweet
THE EXPENDABLES 2 SNAPSHOT 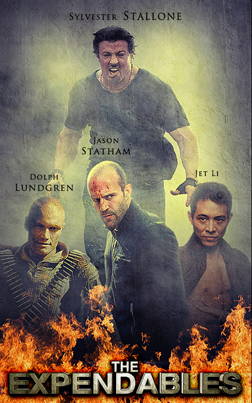 ADVERTISEMENT
This page was tagged for
The Expendables 2 english movie
The Expendables 2 reviews
release date
Sylvester Stallone, Jason Statham
theatres list
Follow @fullhyderabad
Follow fullhyd.com on
About Hyderabad
The Hyderabad Community
Improve fullhyd.com
More
Our Other Local Guides
Our other sites
© Copyright 1999-2009 LRR Technologies (Hyderabad), Pvt Ltd. All rights reserved. fullhyd, fullhyderabad, Welcome To The Neighbourhood are trademarks of LRR Technologies (Hyderabad) Pvt Ltd. The textual, graphic, audio and audiovisual material in this site is protected by copyright law. You may not copy, distribute, or use this material except as necessary for your personal, non-commercial use. Any trademarks are the properties of their respective owners. More on Hyderabad, India. Jobs in Hyderabad.