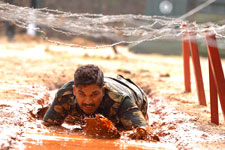 T J Reddy / fullhyd.com
EDITOR RATING
6.0
Performances
Script
Music/Soundtrack
Visuals
7.0
5.0
6.0
7.0
Suggestions
Can watch again
Yes
Good for kids
No
Good for dates
No
Wait for OTT
No
One specific scene notwithstanding, the one takeaway we had after watching Naa Peru Surya is that the Indian Army has exceptional recruiting standards. It is no place for your run-of-the-mill Telugu movie "hero". It is no place for hot-heads who shoot first and ask questions later. And it is no place for jingoistic patriotism. It is, however, a place brimming with dignity and discipline that employs men and women of the highest calibre.

In Naa Peru Surya, Allu Arjun's Surya is tasked with showing his superior officer, Colonel Sanjay Srivastav (Boman Irani), that he is indeed a soldier of the highest order. In the first act, Surya kills a captured terrorist because of his anger management issues and a misplaced sense of patriotism. This, in turn, results in him being removed from active service. He is given a chance at redemption when he is employed to obtain a certificate of competency from India's most reputed psychologist Ramakrishna Raju (Arjun Sarja).

Another week and another Telugu movie hurting itself by having its reach far exceed its grasp. This has become an all too familiar phenomenon now.

What is even more exasperating is that every plot thread mentioned above has at least one moment of sheer quality storytelling. The comedic track has Vennela Kishore's talks (I guess all the creativity went into the slow-mo shots) about downing one's own frustrations, the romance track shows the inherent stigma attached with dating an army man while holding a mirror up to Surya's own shortcomings (take some notes Kaatru Veliyidai), the battle with the mafia has a bevy of exquisitely designed Kill Bill- / Lost World-inspired fight scenes and so on.

The primary plotline is a coming-of-age tale. Surya's interactions with Ramakrishna Raju, while bombastic, are fuelled by some genuine emotions as they address deep-seated sentiments amongst humans in general. The movie nearly morphs into a more-rugged and glossy version of Good Will Hunting as it attempts to portray genuine character growth from time to time with clever visual cues and pure acting excellence. To its credit, the film plays much of Surya's development as a human for subversive laughs as it shows him learning management, patience and communication skills while staying true to his ideals. The old adage of keeping one's goals steady and one's methods flexible is reinforced here.

But not for long. Challenging ideas, clever/rebellious moviemaking and seismic character growth need to be pushed aside when the shotgun-wielding third act comes rolling into town.

Every single one of the aforementioned segments is nestled inside generic end-to-end noise and an ending that would make Arjun Reddy proud. In simple terms, the movie itself seems to be unsure of its own methods. Writer/director Vakkantham Vamsi places his trust squarely in his abilities as a mass cinema maverick and only sparingly in his ability as a genuine storyteller. This leads to a movie that is about twenty minutes too long and about thirty minutes too short in all the wrong places.

Due to its reliance on pre-existing tropes, the movie makes Varsha (Anu Emmanuel) just bodacious eye-candy who interrupts the flow with some terrible costumes, misplaced songs and rushed shifts in character. Sarath Kumar's Challa exists because the movie needs an impetus for a few fight scenes and jingoistic line readings, and the most promising storyline, the A-plot with Arjun Sarja, is watered down with unearned resolutions simply because the movie has no time to explore it to its fullest extent. This is doubly frustrating when you recall the time you sobbed like a baby at Cable Raju's evolution from a self-serving narcissist to a fully-evolved human being in Vedam. A movie where proper time and care were given to a character's journey.

Like in Vedam, Allu Arjun goes for broke here, too. Unlike his contemporaries who believe in essaying stone-faced angry young men, Arjun makes his face a tapestry of carefully crafted emotions that hits a crescendo in one scene at a police station that ushers in the third act. His performance, mannerisms and character ticks in that scene alone are worth the price of admission. It's truly impressive how he has grown from being that awkward boy who dropped grapes on navels in Gangotri to an anchor that makes undercooked cinema entertaining.

As he is the only character of any relevance, the background music and visual aesthetic afforded to him are top-notch as well. While the movie is loud to the point of its booming score becoming nothing more than a bland platitude amidst all the punching and kicking, the sparing use of the said score only as a means of underlining specific character moments makes it palatable.

On the flip side, the lesser said about the songs the better. The hattrick of duets brings the movie to a screeching halt every time they rear their uninvited heads.

The movie's visual storytelling is on point from time to time as well. Even though it borrows its ideas from films past, it repurposes those smart pieces of fight choreography and character interactions to a Tollywood aesthetic. The fact that the movie short-changes itself with mediocre wish-fulfilling storytelling from time to time makes this loss of potential hard to stomach.

The first sequence of the movie has a plaque on the wall that reads "Only the best of friends and worst of enemies visit us". This is true for both the army and the cinema hall. We here at fullhyd.com love our movies, and make our way to the theatres through rain, sleet and snow. We enjoy watching our friends on screen because we simultaneously grow as people while watching their cinematic journeys. Some journeys are entertaining and thought-proving a la Rangasthalam, and some are boneheaded and manipulative a la Jawaan, but none is ever boring. Every single story lends to discussion and dissection. Slotting itself somewhere between the two aforementioned mega-family movies is Naa Peru Surya.

Its ambitions may be lofty, and its whole isn't as captivating as the sum of its parts, but make no mistake, some of those parts are hugely entertaining.
Share. Save. Connect.
Tweet
NAA PERU SURYA -... SNAPSHOT
NAA PERU SURYA - NAA ILLU INDIA SNAPSHOT 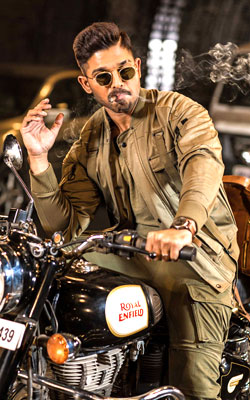