Veturi Sarma / fullhyd.com
EDITOR RATING
8.0
Performances
Script
Music/Soundtrack
Visuals
9.0
9.0
7.0
8.0
Suggestions
Can watch again
Yes
Good for kids
Yes
Good for dates
Yes
Wait to rent it
No
"Asalu Savitri gari kadha rayadaniki meekem arhatha undi?" cameraman Naresh asks the reporter Madhuravani (Samantha). Her response, notwithstanding her stammering, is determined: "Arhatha sampadinchake rastanu." That opening exchange sets the standard and ambition for Nag Ashwin's Mahanati, and over the next three hours, the man achieves both in what will probably remain the gold standard for biopics in Telugu films.

With photographer Anthony (Vijay Devarakonda) in tow, Madhuravani sets about to know the story of the legendary actress. She comes across Savitri's final letter where the actress writes about meeting Sankarayya, though nobody seems to know who Sankarayya is. It is Telugu cinema's Rosebud moment from the iconic Citizen Kane. It is a daring and an ambitious move on the writers' part to reference one of the finest films ever made in Mahanati, yet the move works just as well here.

It is this very ambition that serves the film quite well, since despite the numerous delightful cameos, terrific performances and obvious nostalgia pervading the film, the narrative focuses solely on its charismatic lead Savitri (played by Keerthy Suresh). Madhuravani reconstructs her life through research and anecdotes from people who knew her. What she uncovers is not a story that just paints her life in numbers and films, but one that carries a message of fearlessness and belief in instinct.

The film then starts off showing Savitri as a wide-eyed and affable theatre artist who spends her formative days wondering how a father's love would be and pining for such adoration from pedananna Kommareddy Venkataramaiah Chowdhury (Rajendra Prasad). Her theatre career becomes the talk of the town, and it doesn't take long for the father-daughter duo to take the train to Madras. The camera takes a bit of time in falling in love with her, but she doesn't take that much in warming up to Ramasami Ganesan (Dulquer Salman), a married man with two kids and a notorious reputation for philandering, whom she marries at the age of 16.

The match between the impulsive Savitri and the free-spirited Ganesan is one headed for doom. The audiences' knowledge of what happened between them adds a curious dynamic to the relation. When the eventual turns actual, the tale that has been heartwarming so far showcases some dramatic emotional upheaval. Ashwin handles the melodrama perfectly, and the final act moves you despite its duration.

Ashwin respects the personal spaces of Savitri and Ganesan by not speculating on what might have happened between them. The script instead juxtaposes the ebbs and flows in their relationship with her choices of roles and her performances in them, and the result is method acting as we know it. The screen keeps shifting to black and white every once in a while, adding to the authenticity of the narrative. Ashwin's script is a winner all through in how it chooses what incidents to pick and string into the narrative in bringing to life the phenomenon that is Savitri.

Keerthy Suresh doesn't just play Savitri, she becomes her. It is like she was destined to play the role, and it is unimaginable that the director could have even auditioned others for it. It is not just the resemblance, which is almost surreal at times, but also the performance that is arresting. From the playful and vivacious girl in the early stages of her career to the forlorn and devastated matinee idol unable to stop her freefall, Savitri is brought brilliantly to life by Suresh, who emotes as much through just her eyes as through her expressions. Suresh owns each moment of her author-backed role in a tour de force.

The supporting cast is led by Dulquer Salman who plays Gemini Ganesan as a man who can't help his charm, can't help falling in love, can't help being in cruel positions in the matters of the heart, and in general can't help himself. When he is called Kaadhal Mannan (king of romance) by a distributor, Salman lets you feel how uneasily the crown sits on Ganesan's head. In the role of an unlikely tragic hero, Salman puts in an assuredly self-centred yet affectionate performance. Rajendra Prasad is always dependable in roles that require gravitas, and in Mahanati he gets to display his enviable range.

Nag Ashwin took about three years in mounting this film, and the effort shows in every detail in the script, every costume, every choice of framing and lighting, and every choice of artist for the cameos. Special mention should also go to Sai Madhav Burra, the dialogue writer whose words add value to every scene. The production design is a tad inconsistent at times, and Mickey J Mayer's score and songs don't add much to the experience, but this is already a film that is so rich in everything else that minor issues such as these don't impact the overall experience.

We can't recommend Mahanati enough, so do yourself a favour and book your tickets immediately. Also take your parents along, for they might be able to find and appreciate more nuances. For a change, this is a movie that justifies its duration and is worth the hype. Soak it in.
Share. Save. Connect.
Tweet
MAHANATI SNAPSHOT 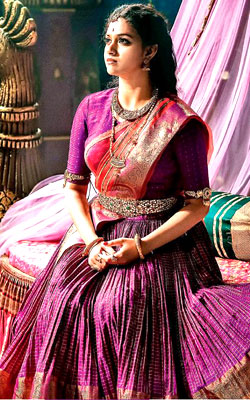 See Mahanati full details
TOP COMMENT
Raghu M on 13th May 2018, 3:33am | Permalink
Here is what I wanted to say about the movie..

Even as Keerthy Suresh and Dulquer Salman were wonderful, I couldn't help cringing again and again at the Telugu. Couldn't they have named Samantha's character something else since Vijay Devarakonda seems unable to say Vani.

Is it fashionable to speak like that?
Dravida on 27th May 2018, 4:17pm | Permalink
What telugu you are talking about?? Please you can't and shouldn't expect artificial sanskritized pronunciation in the name of pure telugu. South indian languages have their own diction and only few scholarly sections of society speak in Sanskritized accent (which is also restricted to some areas)!!
Veturi Sarma on 13th May 2018, 11:16am | Permalink
There's a scene in Pilla Zamindar where the Telugu Master (M S Narayana) corrects Nani's pronunciation of malli, and says that is should be pronounced maLLi, from his deathbed. Naani says that he can't say it right even if he tries hard (malli malli naku malli ane vastundi sir).

That's a poignant scene about the state of Telugu as a language in Telugu films. There's no point getting disappointed if they cant get it right. Instead we should be rejoiced when/if someone gets it right.

Incidentally MS Narayana garu has passed away and Naani keeps saying malli in his films.
RC on 13th May 2018, 4:11pm | Permalink
I can't shake away the disappointment. Consider the effort these actors make for being physically ready (all those hours in the gym, I mean), growing beards or gridlocks or whatever else their 'role demands'. Diction does not even feature in their list of important things to fix?! I find it bizzare. My theory is this: the 3rd and 4th generation actors from the big name families were brought up outside of AP and have an iffy command over the language. They never cared to/couldn't fix it. In the face of no criticism, this kallu-pelli diction became the trend.

The songs in Mahanati, on the other hand, the words have perfectly enunciated Telugu, despite non-native speakers of Telugu singing. These actors on the other hand - le sigh!
TBTF on 11th May 2018, 4:56am | Permalink
The one and ONLY reason I read/visit fullhyd.com is for movie reviews .

All of you guys/girls who review movies here are passionate and pure lovers of cinema. Have enjoyed reading your reviews for over 10 years.

Love this review - Nag Ashwin was mind blowing in " Yevade Subramanyam " - movie had incredible depth about true meaning of life/love/friendship/happiness /loss that was way beyond current Telugu Cinema industry's ability to understand .

This movie hopefully will make a ton of money so that we can forever be free of the " star " directs the story system we have now .

How in the hell a director like " Yeleti Chandrasekhar " movies don't make money in our states - it's $%^& sad .

This should be a super duper hit to save telugu cinema.

Glad you mentioned Sai Madhav Burra - after Gandham Nagaraju he is the best writer of TELUGU words in movies that just move you - watch his speech in audio release function :

ADVERTISEMENT
This page was tagged for
mahanati savatre full film in tamilthe Rascal
list of movies at talluri
Mahanati telugu movie
Mahanati reviews
release date
Follow @fullhyderabad
Follow fullhyd.com on
About Hyderabad
The Hyderabad Community
Improve fullhyd.com
More
Our Other Local Guides
Our other sites
© Copyright 1999-2009 LRR Technologies (Hyderabad), Pvt Ltd. All rights reserved. fullhyd, fullhyderabad, Welcome To The Neighbourhood are trademarks of LRR Technologies (Hyderabad) Pvt Ltd. The textual, graphic, audio and audiovisual material in this site is protected by copyright law. You may not copy, distribute, or use this material except as necessary for your personal, non-commercial use. Any trademarks are the properties of their respective owners. More on Hyderabad, India. Jobs in Hyderabad.