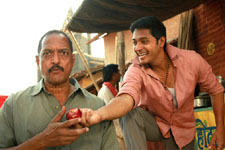 Nupur Barua / fullhyd.com
EDITOR RATING
6.0
Performances
Script
Music/Soundtrack
Visuals
7.0
5.0
5.0
6.0
Suggestions
Can watch again
No
Good for kids
Yes
Good for dates
Yes
Wait to rent it
No
Do not be fooled by the title. The movie has nothing in common with Malamaal Weekly, except for an unhealthy obsession with lottery tickets. Unless you count the actors who are a part of every Priyadarshan movie.

Kamaal Dhamaal Malamaal is a remake of the 2010 Malayalam blockbuster Marykkundoru Kunjaadu. It is the original title that gives you a hint of what the movie is all about - a man who is petrified of the world around him, a "kunjaadu", or lamb, or, in the Hindi version, a "bakri".

To begin at the beginning, Johnny (Shreyas Talpade) is an unemployed young man, and a coward. He is so renowned for his irrational paranoia that the villagers have, for some reason, taken to calling him "Bakri". They laugh at poor Johnny all the time.

Johnny's domineering father David (Om Puri) is not too healthy, and there is nothing Johnny can or will do to take over the responsibility of the family, because he is just too scared. His sole occupation is to buy lottery tickets week after week.

Johnny is also in love with Maria (Madhurima Banerjee), whose father Peter (Paresh Rawal) is a bully and goon. Peter does all he can to be a thorn in the side of the two lovers. He employs his own sons to keep Johnny and Maria apart. A distraught Johnny has nobody to turn to, given Peter's clout.

Until the day a mysterious man named Sam enters his life. Sam is the strong and silent type, but he is constantly ravenous. His only master is food, and Johnny decides to feed him in exchange for his loyalty. Suddenly, the Bakri has a bodyguard, and an intimidating one at that. Johnny the Coward becomes Johnny the Brave, a force to be reckoned with.

Why, however, is Sam in the village? What is his mystery? And why does he agree to defend Johnny? Can Johnny and Maria be united as lovers? Why is Peter always so angry? If you want the answers to all of the above, then you have to sit through Kamaal Dhamaal Malamaal, and, rest assured, your questions will have various versions of the same answers.

The plot does not thicken during the movie. It is already a thick plot. In typical Priyadarshan fashion, all the inhabitants of the village are seriously crazy, and they do not think that their antics are in any way out of the ordinary. Once you have willingly suspended your powers of disbelief and reasoning, everything in the story makes sense. It is a roller coaster ride with some memorable characters, all heading towards a peaceful solution to the tension between David and Peter.

The second half drags a bit, maybe because Sam is so deadpan, but picks up towards the climax. As far as humour is concerned, the movie gets it right, with a little slapstick and some great acting.

Om Puri and Paresh Rawal are the heroes of the movie. Both the veteran actors portray their characters with such conviction that you may just think of them in terms of David and Peter after this. And their comic timing is bang on. The movie belongs to them, and the rest are just supporting cast members.

Shreyas Talpade does justice to his role, somewhat, but gets carried away at times with some (involuntary) hamming. Madhurima Banerjee as his love interest is tepid, but pleasant enough. Nana Patekar is so deadpan that at times you think he is actually fast asleep with his eyes open. He does not seem too comfortable with the role, nor the way it shapes up towards the end.

The OTT comedy, without which no Priyadarshan movie is complete, is provided by Shakti Kapoor, Neeraj Vora and the inimitable Razzak Khan. Neeraj Vora is actually a little irritating at times, but thankfully not for too long. And the trio is ably supported by Pratima Kazmi and Asrani (getting older now, but with erratic bursts of energy).

The songs are enjoyable, although they may not burn holes in the chartbusting list. The production design has the Priyadarshan touch, albeit with a whole lot of colours, as opposed to his favoured various shades of white. The costumes do not look too village-y, but then, neither does the village (which may be in Goa, but can also pass off as a small town in Kerala).

What remains to be seen is how Paresh Rawal (Kamaal Dhamaal Malamaal) competes with Paresh Rawal (Oh My God!) this weekend. If you are a Priyan fan, then you have to watch Kamaal Dhamaal Malamaal, one of his more sensible movies in a while, without cutting out the laughs and the nonsense.
Share. Save. Connect.
Tweet
KAMAAL DHAMAAL MALAMAAL SNAPSHOT 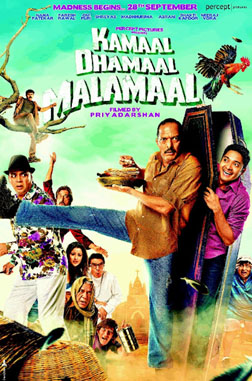 ADVERTISEMENT
This page was tagged for
Kamaal Dhamaal Malamaal hindi movie
Kamaal Dhamaal Malamaal reviews
release date
Om Puri, Paresh Rawal
theatres list
Follow @fullhyderabad
Follow fullhyd.com on
About Hyderabad
The Hyderabad Community
Improve fullhyd.com
More
Our Other Local Guides
Our other sites
© Copyright 1999-2009 LRR Technologies (Hyderabad), Pvt Ltd. All rights reserved. fullhyd, fullhyderabad, Welcome To The Neighbourhood are trademarks of LRR Technologies (Hyderabad) Pvt Ltd. The textual, graphic, audio and audiovisual material in this site is protected by copyright law. You may not copy, distribute, or use this material except as necessary for your personal, non-commercial use. Any trademarks are the properties of their respective owners. More on Hyderabad, India. Jobs in Hyderabad.