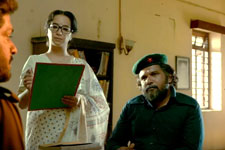 Josh / fullhyd.com
EDITOR RATING
4.0
Performances
Script
Music/Soundtrack
Visuals
5.0
2.0
6.0
8.0
Suggestions
Can watch again
No
Good for kids
No
Good for dates
No
Wait to rent it
Yes
We would be correct more than 50% of the time if we said this: You grew up in the '90s. Even if you were good at something you were not allowed to pursue it. You adulated Chantigaadu and Pandugaadu. You went to coaching. You went to engineering college. There, you discovered beer, and unlimited porn. You didn't learn much engineering. You forgot about the existence of newspapers, and thus much of what happens in the world out there.

You found yourself a job in an MNC. You probably went to the USA. You spend a lot of time and money on the home loan, or the car loan, or the student loan, or on some other loan. You don't have many interests. You don't have much time. But, wherever you are, you have air-conditioning. This isn't about us going holier-than-thou, because this reviewer matches a lot of this description anyway. This is merely a reflection on the times and the Telugu people in these times.

George Reddy attempts to fling you back into a different time. That time when students read newspapers and poetry. When Sri Sri was not a spiritual guru who taught you the art of living, but a soul-stirring poet whose poems made you feel alive. Those times when revolution was in the air. People were certain that one day this revolution would precipitate, and rain upon them and their world, so that they may all be cleansed and welcome a new world. Free and fair.

Except, the precipitation occurred rarely, and was certainly not enough. As people waited, revolution continued to be in the air, but not so much like rain as like humidity. It made people sweat. It tired them. They noticed that the sun kept beating down on them even more harshly than before, and that the damned revolution still wouldn't precipitate. Somewhere along the line, we, the Telugu people, decided that the air needed conditioning. Along with the air, we got conditioned, too.

So when we walk into a theatre with central air-conditioning, comfortable recliner seats and caramel popcorn, we aren't really the best absorbers of the troubles of the '60s. After we witnessed the aggressive gentrification of Gachibowli, we don't see the big deal in a few people being kicked out of their huts to go live in a more distant place with pucca houses. When we don't care two hoots about the fee hike protests in today's JNU, we definitely don't care a fraction of a hoot about food conditions in the 60s Osmania. Yet, if they chose to, it is in the power and duty of filmmakers to make us feel for it all.

Jeevan Reddy, the director of George Reddy, fails to wield this power.

George Reddy, the man that informs George Reddy the film, was half-Malayali, a gold medalist in Physics, hypnotically oratorical, incredibly strong, and always ready to fight. By all standards, he was a rare and remarkable individual. He was one of those guys who made revolution seem imminent. He abhorred religion in campus politics. He wouldn't let caste impact student treatment. He ensured scholarships to the deserving. And he fought a lot. He kept fighting till he was brutally murdered in broad daylight. He deserved a great biopic.

But George Reddy, the film, belongs to the genre Not-A-Biopic, which was recently discovered by Surender Reddy for Syeraa Narasimha Reddy. The Not-A-Biopic looks like a biopic and feels like a biopic, but is packaged in a glossy cover with fineprint that says Not-A-Biopic. Like the ice-cream box we buy in the store which says in fine print that it's really only Frozen Dessert. It doesn't matter to us as long as it tastes good, but this Not-A-Biopic called George Reddy also tastes bland. And it's quite cold.

The coldness is no good because this story needed the movie to make our blood boil. It needed us to punch our fists in the air resonating with the slogan Jeena Hai Toh Marna Seekho! The distant nature of the story-telling doesn't give us that emotion. Sandeep Madhav's actively physical, but merely physical, performance doesn't gravitate us to the personality on screen. Jeevan Reddy's diligent but hollow direction doesn't even let us feel for his characters, let alone feel with them. The talented performances of Thiruveer, Abhay Bethiganti and a number of artistes in smaller roles cause those respective scenes to make an impact, but that is not due to the writing and direction - rather, it is in spite of them.

The protagonist is given the mass hero treatment. His introduction scene is the classic trope of the hero tackling a bunch of men harassing women. Then why hesitate at letting the punch land on these miscreants' faces? Why does every punch feel pretended? Okay, forget the mass film stuff. Why does the film hesitate to mention religion or caste in a context that is clearly to do with right wing - left wing conflict? Sure, the censor board will mute out or even chop off those portions, but why self-censor in a movie about a brave man who spoke without fear?

To be fair, George Reddy isn't an incompetent film. It is roughly on the same level of competence as Mahanati or Syeraa Narasimha Reddy, both of which were dull films enlivened by matters that had little to do with filmmaking. That is to say, George Reddy as a personality is not as nostalgia-inducing as Savitri, and Sandeep Madhav as a lead is not as compelling as Chiranjeevi. And there are no celebrity cameos for you to play spot-the-star.

When a society can purchase air-conditioning, it can also purchase great cameras, jibs and cranes and drones, synthesisers, guitars, mixers, and all the technical talent needed to wield these instruments. We can purchase glossy looks, smashing stunts and electrifying sound. Now, then, if only we could purchase an affecting film with all that.
Share. Save. Connect.
Tweet
GEORGE REDDY SNAPSHOT 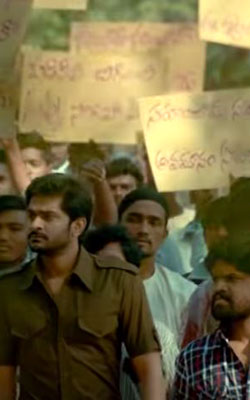 ADVERTISEMENT
This page was tagged for
george reddy movie in movierylz
george reddy online movie
George Reddy telugu movie
George Reddy reviews
release date
Follow @fullhyderabad
Follow fullhyd.com on
About Hyderabad
The Hyderabad Community
Improve fullhyd.com
More
Our Other Local Guides
Our other sites
© Copyright 1999-2009 LRR Technologies (Hyderabad), Pvt Ltd. All rights reserved. fullhyd, fullhyderabad, Welcome To The Neighbourhood are trademarks of LRR Technologies (Hyderabad) Pvt Ltd. The textual, graphic, audio and audiovisual material in this site is protected by copyright law. You may not copy, distribute, or use this material except as necessary for your personal, non-commercial use. Any trademarks are the properties of their respective owners. More on Hyderabad, India. Jobs in Hyderabad.