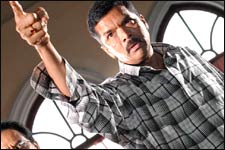 Deepa Garimella / fullhyd.com
EDITOR RATING
2.0
Performances
Script
Music/Soundtrack
Visuals
7.0
3.5
1.0
2.5
Suggestions
Can watch again
No
Good for kids
No
Good for dates
No
Wait for OTT
No
After inundating us with astronomical amounts of obscenities not very long ago, Posani comes up with yet another awe-inspiring projection show of his radical views on 'issues'. This time, it is politics that he's set his eye on.

Our entrÃ©e consists of a girl being hurled onto a drum of boiling hot tar by a spurned lover, and subsequently losing her sight. Raja (Posani Krishna Murali) is an uncompromisingly upright police officer who deals with the case. He does not hesitate to call a spade a spade. And if the spade is a wrong-doer, he'd leave no stone unturned in punishing it. Mostly, he'd aim for its crotch.

Because the accused is the brother of an MLA, Raja's not allowed to dole out justice properly. His seniors treat him as a recruitment error, but he has his own ways of shaming, nay, disgusting, them into doing their job. Such a man is tough for any criminal, but for this one it's tougher - Raja makes him donate his eyes and skin to the victim.

The villains scream revenge, of course. So they bash him up, get his wife to undergo an abortion and a hysterectomy, and send Raja her 'garbhasanchi' in a parcel - and in case you don't get it, this is all so that Raja is never able to fertilize her (and by a logical extension, so that they never become parents again). There, this is the kind of bile that's served up as the gravy on the side of this cesspit.

Raja is removed from his job, and now moves on to set up a fishery. The second half is mostly a snide satire on the blatant corruption in the fisheries department - Brahmanandam and Ali are among the actors who come up with some truly entertaining comedy here.

There's also a parallel track of Kota Srinivasa Rao (Kota Srinivasa Rao), a politician casting aspersions on the new entrant, the superstar-turned-politician Siva Prasad (Giribabu) - in a flagrant glorification of you-know-who. This sub-plot involves a scene in which Srinivasa Rao's daughter strips in front of a crowd of thousands (in a grand display of willingness to give anything to her people, even her own clothes), and Srinivasa Rao being strangled by his own children so that he will become a martyr.

Posani closes his flick with a flourish - in a scene towards the end, Raja's disrobed wife willingly stays nude on the street, with her husband daring the amassed crowd to have a longer look at her - in some twisted symbolism of how the whole country has been stripped bare by its perpetrators.

So should you watch Rajavari...? Well, aside from a few good scenes of theatrically executed parody, most of the rest is a crude, grating and obnoxious playing-out of Posani's morbid fantasies of nasty things that he'd like to do to nasty people - thus making the originally nasty people seem like Mother Theresa on a walk with Maria Von Trapp.

Posani is deadpan, but does stir up some hard-hitting satire in places, with premises basic enough to reach out to the majority. Moreover, his tactic of keeping character names simple, i.e., naming them the same as the actors playing them, suggests a "let's get down to business" attitude. However, whatever point he tries to make gets obscured by the sheer loathsomeness that he envelopes us in. If only he toned down on the repugnance, we would have some powerful cinema from the man.

Indeed, the rest of the cast (excluding those obscure faces) is a highly accomplished set - Kota, Brahmanandam, Giribabu, Krishna Bhagawan, Venu Madhav - and they lend good performances. A couple of hideous songs gives audiences ample opportunity to see skimpily dressed women - and not turn away in disgust at the scene, for once.

There are bad films and worse films, but few strive so hard to be truly offensive. If you're ever caught in this one, all we'll say is, flush it and forget it.
Share. Save. Connect.
Tweet
RAJAVARI CHEPALA CHERUVU SNAPSHOT