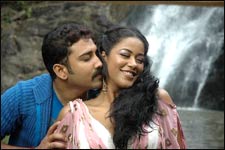 Deepa Garimella / fullhyd.com
EDITOR RATING
3.0
Performances
Script
Music/Soundtrack
Visuals
6.0
3.0
3.5
3.0
Suggestions
Can watch again
No
Good for kids
No
Good for dates
Yes
Wait for OTT
Yes
Akash is an ambitious, talented, successful and handsome boxer. At least he was, until someone bewitched him into a seedy guesthouse and broke his spine. Mandakini (Mumaith Khan), his writer-girlfriend, is the prime suspect. Bose (Siva Balaji) is a sprightly young officer from CBCID, who is assigned the task of handling Akash's murder case.

The investigation yields some perplexing results. Apparently, Akash was killed by a person who knew marma kala. They immediately consult their 'records', which, in a movie, means a database of 'everything except the position of Saturn at the birth of the grand-aunt of every possible person in the state'. These omniscient annals show that there are only 3 alive who have mastered the art â€" and none of them is Mandakini.

However, even though there are about 38,789,748 other clues pointing to Mandakini, she gives the police a tough time during the course of the enquiry. Maybe because she didn't kill Akash. Or maybe because she has secret plans. Maybe they're so secret even she doesn't know them. Or maybe because she wanted to let her clothes talk for her, but they never turned up. In any case, the amount of surface area she has on display enchants even the lie detectors.

It's not only the geography of her body - she's also very good at using geography in general. For example, one night, she starts driving from Hyderabad with Bose in her car, and the next morning she lands in Coorg. This and other extra-curricular activities by Bose irritate the lady officer Veda (Shraddha Das) who did a bold, raunchy number with him.

But the case is smoking now. A couple of other people are found dead one after another. The real killer is found after a few earth-shattering revelations. And the reason why the killer kills is also given. A greedy boyfriend, a perverted policeman and the rape of a girl with all her clothes on, are involved.

Target is a case of a film decently made but with limited resources. And one of these limited resources was the script. Though it has traces of intelligence and wit all through, as seen in the dialogues, it loses out on suspense, of which there's none. There are a few attempts at gripping attention, but they lead nowhere â€" these twists are just ends in themselves.

The performances are good, including, hold your breath, some above average work by Mumaith Khan. The problem with her is that she takes her assets a little too seriously. Siva Balaji is talented, but Shraddha Das is a little wooden. A few actors were wasted, like Jeeva in his pointless role as an insurance salesman. And Venu Madhav makes a chuckle-worthy cameo as a sleazy hotel owner.

Technical values are low, though the story is woven neatly. Koti's music is mostly jarring, but one exceptionally interesting part of the film is a seductive song picturized on Shraddha Das, that was done entirely in one shot.

Unless you're the kind who's seriously rooting for Ms. Khan, this one can be given a miss.
Share. Save. Connect.
Tweet
TARGET - GURI TAPPADU SNAPSHOT

ADVERTISEMENT
This page was tagged for
Guri tappadu ra song
the target thelugu movies
Target - Guri Tappadu telugu movie
Target - Guri Tappadu reviews
release date
Follow @fullhyderabad
Follow fullhyd.com on
About Hyderabad
The Hyderabad Community
Improve fullhyd.com
More
Our Other Local Guides
Our other sites
© Copyright 1999-2009 LRR Technologies (Hyderabad), Pvt Ltd. All rights reserved. fullhyd, fullhyderabad, Welcome To The Neighbourhood are trademarks of LRR Technologies (Hyderabad) Pvt Ltd. The textual, graphic, audio and audiovisual material in this site is protected by copyright law. You may not copy, distribute, or use this material except as necessary for your personal, non-commercial use. Any trademarks are the properties of their respective owners. More on Hyderabad, India. Jobs in Hyderabad.