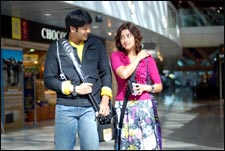 EDITOR RATING
6.5
Performances
Script
Music/Soundtrack
Visuals
6.5
6.0
6.0
7.5
Suggestions
Can watch again
Yes
Good for kids
Yes
Good for dates
Yes
Wait for OTT
No
Many people fly to Singapore every day, and several of them use aeroplanes for it. Dhruv (Manoj) and his friends are no exception - they are waiting at an airport in Malaysia for their flight when Dhruv sees a girl who is going to Hyderabad and instantly falls in love with her. In case you are thinking that's a rather elementary criterion to fall in love with a girl, that's not the main reason, of course - he finds her quite good-looking.

The same, however, cannot be said for Harika (Harika), who quickly discovers that Dhruv and his friends are only slightly less painful than a bout of migraine, and much less useful. It all starts with Dhruv realizing that he has just 2 hours to court her, and starting off by asking her if she has a tablet for headache, after a small introductory conversation.

Now the only person at fullhyd.com who ever asked a woman for a tablet for headache after merely a small introductory conversation with her, informs us that it takes 2 years and 3 months for the woman to get over it completely. But this is a movie, and besides, for Harika, Dhruv is a much bigger headache than the tablets she has usually relieve her of, and she's happy to get rid of it by giving him an entire strip.

Prayanam is more of a comedy than a romance, with well-conceptualized scenes (especially Brahmanandam and his chair) and befittingly written lines. Set entirely in an airport lounge, it has some rather creatively conjured characters, especially Dhruv's and Harika's friends. If you had to crib, it would be about Harika herself, who does little more than look good and appears almost like a decoy for a real heroine. It can't all be her fault, though - it's a rather poorly-written character, a surprise for this movie. And she and Manoj have as much chemistry as noodles and ice.

The script itself is, well, a script. There are so many situations in the movie where real-life would be infinitely more hostile, and it's the writing coming to the rescue of the hero. Young audiences are likely to fail to realize this, as the unflappable Dhruv becomes a role model for them and they set the bar higher for their own courtship efforts.

Manoj is quite good, and this might be the movie he has been looking for to get his nameplate in the Tollywood lobby. Also scoring high is, unsurprisingly, Brahmanandam, the only other known face in the movie. The rest of the performances are mostly amatuerish, though Kalpika, as Harika's no-nonsense friend, deserves mention even if she seems to have only one expression in the entire film.

It's hard to bring a vivacious look to a film with just 5 characters and one location, but Prayanam looks pretty zany visually. There are thankfully just 1-2 songs, which are mostly routine stuff.

Prayanam is a mostly benevolent flick - ingratiatingly cute at times, irremediably funny at others, and generally harmless, even to weak and needy audiences. However, like we said, it also shows a new level to set the bar at for all those of us whose egos get in the way of sustaining our courtship efforts - Dhruv's absolution of his self-esteem in his pursuit of his love is almost theoretical, and he is bound to be a role model to a lot of youngsters who will now try even harder in the face of decisive snubbing, forgetting that Harika's reactions were remote-controlled by the writer. Is that a blessing or is that a curse? Where does courtship morph into eve-teasing and harassment?

Like we at fullhyd.com always say, the box-office potential of a movie is oft interred with its last show, but the evil that a movie does lives on and on.
Share. Save. Connect.
Tweet
PRAYANAM SNAPSHOT

See Prayanam full details
PRAYANAM USER REVIEWS
1 - 1 OF 1 COMMENTS
POSITIVE  |  NEGATIVE |  NEWEST  |  OLDEST  |  MOST HELPFUL  |  LEAST HELPFUL
USER RATING
7.7
3 USERS
Performances
Script
Music/Soundtrack
Visuals
8.0
8.3
8.3
7.0
Can watch again - Yes
Good for kids - Unsure
Good for dates - Yes
Wait for OTT - No
nyashodhar on 8th Jun 2009, 5:34pm | Permalink
Great background music..amazing direction..script is good..how ever the plot is not that great..overall movie is superb..can watch it as many times as you can..!!

ADVERTISEMENT
This page was tagged for
Prayanam telugu movie
Prayanam reviews
release date
Manoj Kumar Manchu, Harika
theatres list
Follow @fullhyderabad
Follow fullhyd.com on
About Hyderabad
The Hyderabad Community
Improve fullhyd.com
More
Our Other Local Guides
Our other sites
© Copyright 1999-2009 LRR Technologies (Hyderabad), Pvt Ltd. All rights reserved. fullhyd, fullhyderabad, Welcome To The Neighbourhood are trademarks of LRR Technologies (Hyderabad) Pvt Ltd. The textual, graphic, audio and audiovisual material in this site is protected by copyright law. You may not copy, distribute, or use this material except as necessary for your personal, non-commercial use. Any trademarks are the properties of their respective owners. More on Hyderabad, India. Jobs in Hyderabad.