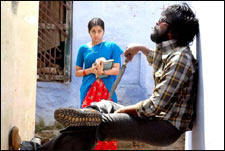 EDITOR RATING
2.0
Performances
Script
Music/Soundtrack
Visuals
6.5
3.0
3.0
7.0
Suggestions
Can watch again
No
Good for kids
No
Good for dates
No
Wait to rent it
No
Ananthapuram is a low-cost dubbed version of a Tamil hit Subramaniapuram. By low cost, we mean low cost - the only way they could have cut dubbing costs any further is by using the same voice for all characters, and we are not even sure they didn't consider that. In what is a first, even the end-credits of this one appear in Tamil.

There are several reasons Ananthapuram is a disastrous movie to sit through, and we at fullhyd.com are not allowed to give out so many reasons for a single movie since it violates some monopoly laws. Not the least of the reasons is that this is a film set in the rural Tamil Nadu of 1980 where you can see just about every man in a lungi with his under-shorts peeping out. Yes, we should have broken that news in 3 sentences, with pauses between them.

Now it is not difficult to imagine a Telugu movie set in 1980 in interior Andhra becoming a hit in AP in 2009, and that would partly be because of the identification of the audiences with their culture and their roots. Which is why this one might have worked in Tamil Nadu. In AP - or anywhere else - that would all be mostly jarring visuals, and sure enough, this one reminds you of those Sunday afternoon regional films shown on Doordarshan in the '80s. Those kinds of movies have their audiences at the Hyderabad Film Club weekly screenings, not at a multiplex or RTC X Roads.

Then, the story itself is highly overrated. This is no thriller or romance - it's a tale of 3 semi-exciting villians with few redeeming qualities who live by the sword and die by the sword, a tale that Ram Gopal Varma has narrated with much more panache, detail and ersatz a plethora of times. And it's s-l-o-w - nothing seems to happen in the first half, and you don't care if anything even happens in the second. And no, Swati, so in-your-face in all the promos, hardly has much to do.

Brahma (Sasi), Sankaram (Jai) and Kasi (Ganja Karuppu) are 3 semi-literate friends, boors, crooks serving as toadies to Somasekharam, an ex-councillor whose political career seems to have stalled and who is taking the loss of power extremely hard. Somasekharam's brother Ranganna (Samudhirakani) cons the trio through sentimental lines, into agreeing to murder the former's political opponent.

After the murder, the three realize that they were used, and that Somasekharam and Ranganna are doing nothing to get them out of jail. They get out on bail with the help of another criminal who gets them to commit more murders in return. And soon the vicious web has them firmly in its grip, bringing in its wake heartbreak for Sankaram who is in love with Tulasi (Swati), and the pain of childloss for his mother.

The story has apparently been cobbled together from a real-life tale, and there doesn't appear to be anything so remarkable about that tale in the first place that a whole movie should be made out of it. The performances are okay, but like we said, the biggest problem is extreme Tamil nativity. For most local audiences, it's almost embarrassing to be caught in a movie like this.

Stay away from Ananthapuram - given the effort they've put into dubbing, you are little more to them than an extra currency note, anyway.
Share. Save. Connect.
Tweet
ANANTHAPURAM 1980 SNAPSHOT


Pros: 1st song in the film
Cons: Story has no direction

ADVERTISEMENT
This page was tagged for
Ananthapuram 2009 Telugu Full movie download
Anthapuram swati Telugu movie download
ananthapuram movie download
anantapuram movie in images
Anantapur am Telugu movie songs downlod
Follow @fullhyderabad
Follow fullhyd.com on
About Hyderabad
The Hyderabad Community
Improve fullhyd.com
More
Our Other Local Guides
Our other sites
© Copyright 1999-2009 LRR Technologies (Hyderabad), Pvt Ltd. All rights reserved. fullhyd, fullhyderabad, Welcome To The Neighbourhood are trademarks of LRR Technologies (Hyderabad) Pvt Ltd. The textual, graphic, audio and audiovisual material in this site is protected by copyright law. You may not copy, distribute, or use this material except as necessary for your personal, non-commercial use. Any trademarks are the properties of their respective owners. More on Hyderabad, India. Jobs in Hyderabad.