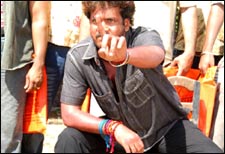 A major high during their relationship occurs when they discover that 18 and 20 are their birth dates, in the same month - which causes them to scream in ecstasy and sing a duet. Which leads us to a nagging question - what do script-writers really do for a living?

Their love story is majorly scalded by Roopini's dad J V (Vinod Kumar), who hires Bullenna (Sivaji) to finish off Manoj and his father (Chinna). Bullenna is a blonde-haired goon who lives his life messing up people's faces, filling the city's cemeteries, and spitting 3 gallons of spit every time he's in the frame, much to the distress of his mother.

She thwarts his attempt to kill Manoj, and later throws a serious tantrum, leading to Bullenna dumping his weapons. She also makes him responsible for protecting Manoj from the big guys. Manoj moves into Bullenna's house, where our lovebirds keep meeting discreetly to give us solid evidence that the lemur isn't done with evolution yet. Meanwhile, J V is busy trying to marry his daughter to the son of any of his business partners, but the grooms keep backing off when Roopini tells all.

Enter Bharati (Shraddha Das), a social worker who wants Bullenna to protect her orphanage from J V's men - they're threatening to poison the children if she doesn't part with the land. Bullenna's supposed non-violent intervention is a huge hit. Now he's on J V's radar for 2 reasons. What's more, Bullenna's weapons are rusting. So's his overdone tapori language. So's his hair. It looks like an iron scrap yard exploded in his face, anyway.

So the climax has everyone fighting everyone in some remote rocky location, and ends with Bullenna crippled because someone dug a rod into his knee. Aside of that, it's a generally happy ending, with people walking into the sunset with the right people.

18.20... opens with a pseudo-grim feel, showcasing a couple of Bullenna's murders in a not-so-subtle way. This is followed by a longish comic interlude by Master Bharath - which is about as entertaining as counting the ridges in your hand. Overall, the film has a lifeless feel to it, aided by the juvenile dialogues, which look like they were made up on the spot.

Sivaji hams his way through, and his makeup and his dialect are too artificial. An inept Mallika Sherawat look-alike as Roopini and a barely adolescent Manoj hardly last in your memory 5 minutes after the end of the film. Bullenna's mother has done the best job, though.

The visuals look like those of an impoverished TV serial, specially the indoors. The songs have the feel of the small-time private compositions aired on DD - effort has gone in, but not by the right people - and have a touch of the '90s in the tunes. The music won't kill listeners, but we can't say the same for the singers - they'd have snapped their vocal chords at the pitch.

ADVERTISEMENT
This page was tagged for
18.20 Love Story telugu movie
18.20 Love Story reviews
release date
Sivaji, Shraddha Das
theatres list
Follow @fullhyderabad
Follow fullhyd.com on
About Hyderabad
The Hyderabad Community
Improve fullhyd.com
More
Our Other Local Guides
Our other sites
© Copyright 1999-2009 LRR Technologies (Hyderabad), Pvt Ltd. All rights reserved. fullhyd, fullhyderabad, Welcome To The Neighbourhood are trademarks of LRR Technologies (Hyderabad) Pvt Ltd. The textual, graphic, audio and audiovisual material in this site is protected by copyright law. You may not copy, distribute, or use this material except as necessary for your personal, non-commercial use. Any trademarks are the properties of their respective owners. More on Hyderabad, India. Jobs in Hyderabad.