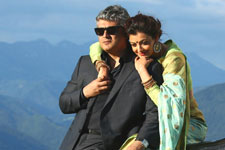 Josh / fullhyd.com
EDITOR RATING
4.0
Performances
Script
Music/Soundtrack
Visuals
5.0
3.0
7.0
8.0
Suggestions
Can watch again
No
Good for kids
Yes
Good for dates
No
Wait to rent it
Yes
What can't Ajith Kumar do? Well, nothing much, apparently.

In the 7 hours 9 minutes of Vivekam's runtime (it's all lies on Google and the censor certificate - the true runtime can only be confirmed through experiencing it), Ajith Kumar (as Ajay Kumar aka AK) writes, talks, predicts, races, kills, cooks (please pay attention to the commas - we are not saying that he writes talks or predicts races or kills cooks), and saves the world. If that doesn't impress you, we'll tell you in more detail.

He stands in the middle of a road atop a dam flanked by about a hundred members of a militia. And there are about four helicopters buzzing around. Everyone is armed. If it were any of us, we'd raise our hands and beg for mercy. If it were James Bond or Ethan Hunt, they'd dutifully execute the thrilling stunt sequence carefully designed by the action choreographer and director. But since this is Thalai Ajith and he has a goner called Siva directing him, he first delivers a motivational speech to the camera on how not to give up, and then precisely demonstrates how to give up on one's life altogether. This he achieves by jumping off the dam while being subject to a torrent of gunfire all of which goes around him even if he is in about a thousand separate lines of fire.

If you get a faint idea of what we are talking about, we'll continue to list some other implausible to impossible feats Ajith Kumar achieves in the 7-hour... uh, you get the point.

AK lives in Serbia/Slovenia/Bulgaria - okay, basically some non-Indian area. He is some sort of a chief agent in a counter-terrorism squad which is some sort of an Indian-run international strategic organisation, where he writes a book on how to track anyone at all on the planet. He manages to be friends with Vivek Oberoi and a white man and a black man and a Russian woman even though each one of them speaks terrible dubbed and accented Telugu. He goes back home and cooks at his wife's restaurant.

Subject to some treacherously lame treachery, he falls from a green-ish hill and lands in snow-filled plains where he survives for long periods solely by breaking tree trunks and doing push-ups while composer Anirudh Ravichandar tears away a few hundred guitars' strings and cinematographer Vetri successfully accomplishes a Revenant-like aesthetic. After finishing off with Revenant Ajith Kumar returns to Mission Impossible and 3D holograms where he seeks to avenge his treachery while saving New Delhi.

There's one more thing he can do. He can sell all this bunkum. In Tamil Nadu at least.

What does Kajal Agarwal do? Well, nothing much, apparently.

She is supposed to be running a restaurant called Theta Telugu (we remind you to not confuse it with theeta Telugu) Bhojanasala, where a bunch of white people are furiously ordering idli and dosa. The reason we say she does nothing is she's so useless at it that her husband has to come and save the day by managing the place for her when she's unable to run it herself. And she teaches Sri Sri poems of concentrated communism to white kids in a villa-like house in Serbia/Slovenia/Bulgaria - you know, a non-Indian area. We'll give you a moment to slap yourself out of this ethno-centric wet dream.

The one thing she does and possibly the only thing she does is to love and admire and worship her husband. And get pregnant. And be available to be targeted by the villain and protected by the husband.

What can Vivek Oberoi do? Well, nothing much. Apparently.

In the 7-hour-9-minute runtime of Vivekam, Vivek Oberoi is present in about 12 hours and 23 minutes. Which is not to say he is all over the film (the film is too busy rubbing itself all over with Ajith Kumar) - he merely makes his portions that much more dull and boring. He is also hands down the least self-respecting villain in recent times. He keeps harping about AK's capabilities and singing paeans like he's some washed-out north-Indian actor without any roles in Bollywood fawning over a south-Indian star hoping to get a couple more south-Indian assignments. Oh...

What should director Siva do? Well, nothing at all. Hopefully.

We'd all be better off if he did nothing for a while and meditated on how lousy a film Vivekam is. And we'd be further grateful if he gains the remotest insight into how he's not made an intelligent spy thriller but rather mechanically replicated great visuals and ruined Anirudh's track record and Ajith's general credibility.

What do we do? Not watch Vivekam, certainly.

As alternatives on what to do, we offer you some suggestions:

1. If you want to enjoy yourself, get to Necklace Road when it rains in the evening and walk around.
2. If you understand Tamil, watch Blue Sattai Uncle's review of Vivegam on Youtube.
3. If you are still itching to watch Vivekam, take a deep breath and calm down. And see a counsellor.

It isn't entirely irredeemable. You'll surely enjoy Vivekam if you are in a coma where you can only process visual and auditory sensations but no cognitive functioning. Or if you are a die-hard fan.
Share. Save. Connect.
Tweet
VIVEGAM (TAMIL) SNAPSHOT 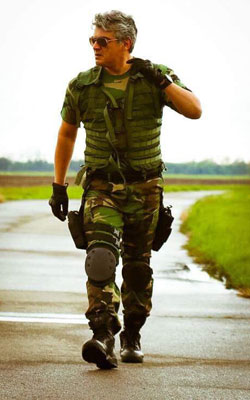 ADVERTISEMENT
This page was tagged for
vivegam tamil full movie
vivegam tamil movie
vivegam tamil full movie .com
Vivegam tamil full movie .com
Vivegam (Tamil) tamil movie
Follow @fullhyderabad
Follow fullhyd.com on
About Hyderabad
The Hyderabad Community
Improve fullhyd.com
More
Our Other Local Guides
Our other sites
© Copyright 1999-2009 LRR Technologies (Hyderabad), Pvt Ltd. All rights reserved. fullhyd, fullhyderabad, Welcome To The Neighbourhood are trademarks of LRR Technologies (Hyderabad) Pvt Ltd. The textual, graphic, audio and audiovisual material in this site is protected by copyright law. You may not copy, distribute, or use this material except as necessary for your personal, non-commercial use. Any trademarks are the properties of their respective owners. More on Hyderabad, India. Jobs in Hyderabad.