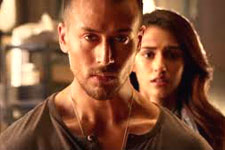 Prerna Prakash / fullhyd.com
EDITOR RATING
5.5
Performances
Script
Music/Soundtrack
Visuals
5.5
3.0
7.0
6.5
Suggestions
Can watch again
No
Good for kids
No
Good for dates
No
Wait for OTT
Yes
Baaghi, a testosterone-fuelled macho thrill-fest, was quite a hit, and many people were awed by the stunts, however physics-defying, in the film. Baaghi 2 keeps that tradition alive by keeping all the conventional tropes of a typical masala Bollywood film intact - the angry, lovelorn young hero, the damsel in distress, and the plethora of antagonists keep the action movie fans intrigued and entertained.

This is the story of Ranveer Pratap Singh aka Ronnie (Tiger Shroff) and Neha (Disha Patani), who were lovers in college but fell apart because of an arranged marriage that forced Neha to marry someone else. Seemingly devastated by this arrangement, Ronnie enrolls into the military and becomes a lethal "one man army" who likes to thrash anti-national elements in Kashmir, tie people to the hood of his jeep, and escape punishment for killing said people because of benign bosses.

The story begins when Neha calls Ronnie after four years to help her get back her kidnapped child. In a series of disjointed scenes featuring illogical action, Ronnie heads straight to Goa to help her, gets embroiled in a plot much bigger than he anticipated, meets and hurts many police officers, and ends up solving Goa's perennial drug trafficking problem. There are many plot twists that happen throughout the film, which also features very clichéd tropes like the jealous husband, the badass cop, an army of Russian, Serbian and Nigerian thugs controlled by an Indian kingpin, and, of course, the indomitable hero.

Ronnie is portrayed as so powerful that he needs not one but two antagonists, the incredibly talented (which cannot be said about our protagonist) Manoj Bajpai and Prateik Babbar. They do great jobs as a bad cop and a drug smuggler with a cocaine-addled mind respectively, but are not given enough screen time courtesy Tiger Shroff's bouncing muscles, or the kind of roles that they deserve. However, they perform their designated tasks of being stepping stones for the hero. The character of the eccentric ACP Loha Singh Dhull aka LSD (Randeep Hooda) also brings some much-needed relief and levity given the monotonous, dull acting of Tiger Shroff.

One of the major problems with Baaghi 2 is the casual way that the film depicts the emotional abuse that Neha's husband and brother-in-law subject her to. In the previous instalment of this film, the female character was given a fiery attitude and some kick-ass moves, even if she needed to be saved ultimately. However in Baaghi 2 Disha Patani's character is a lacklustre element, introduced only to help our hero attain his reason for killing and wasting his way throughout the landscape of north Goa.

The film fails the Bechdel test miserably as there is only one woman throughout the 150-minute of runtime, if you don't count the daughter, and her only job is to be a damsel in distress, with no dialogues of importance, and no charisma at all. She is not important to the script except as a device to introduce the hero and the dilemma of the film all at once, and when she is conveniently disposed off of, she is not missed.

Baaghi 2 is also a great showcase for the inconsistent track record of the CBFC. Limbs and necks are broken with gay abandon throughout and at one point the camera focuses on Manoj Bajpai poking a finger into a bullet wound on Ronnie's body, and yet the movie has been awarded a mild UA rating while others are routinely banned, chopped and/or given A certificates merely as punishment for being realistic.

Tiger Shroff is good at being a brutal one man army, but lacks emotion, facial expressions, depth or panache, and can emote only through popping veins and cracking knuckles, making his character very insipid. The movie has very good other actors but reduces them to being foils for the lead, not using their creative abilities to the best, and in this process loses its chance to be a well-acted, star-studded film. Manoj Bajpai is brilliant as a stereotypical drug-lord, waiting in the safety of his lair as the hero breaks his way through the ranks of armed guards to reach him. While the execution of the role is perfect, the dialogues could have been better and crisper.

Randeep Hooda plays the part of a bizarre ACP to perfection, but is not given enough time to make a mark, just as Prateik Babbar's talent is underused by not giving him enough screen time or good dialogues. The only character that seems to be well-constructed and well-played is that of Usman Langda (Deepak Dobriyal), a small-time crook with his heart in the right place.

The film redeems itself a little through its music, which, while not unforgettable, is composed beautifully. The love songs are melodic and have hummable tunes, and a few parts of the movie are replete with action-packed soundtracks with the power to keep the audiences hooked. Jacqueline Fernandez's rendition of Ek Do Teen will however leave the lovers of the song, Madhuri Dixit and old films in tears, and not in a good way - it is an abomination.

The filmography and cinematography are functional. The locales are beautiful, of course, but a disproportionate amount of time is spent focusing on the rock-hard, chiselled body that Tiger Shroff totes around for the entirety of the film.

Throughout the narrative of Baaghi 2, there is a rapid deterioration of logic and all things that constitute a meaningful film. Even action fans, who might be used to films not being about emotions or acting as much as they are about the fight sequences, might be disappointed with the way this movie unfolds. It does not give the present generation a new action hero, but instead hands you a clichéd, gun-toting Rambo look-alike, who is yet again all about brawn and not much about brain.
Share. Save. Connect.
Tweet
BAAGHI 2 SNAPSHOT 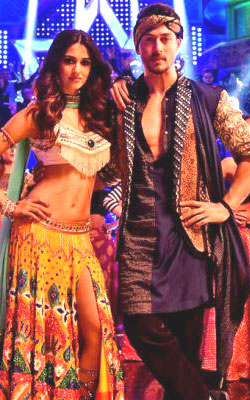 See Baaghi 2 full details
BAAGHI 2 USER REVIEWS
1 - 2 OF 2 COMMENTS
POSITIVE  |  NEGATIVE |  NEWEST  |  OLDEST  |  MOST HELPFUL  |  LEAST HELPFUL
USER RATING
10
1 USER
Performances
Script
Music/Soundtrack
Visuals
9.0
10.0
7.0
8.0
Can watch again - Yes
Good for kids - No
Good for dates - Yes
Wait for OTT - No
valayankit on 18th Aug 2018, 6:17am | Permalink
Surprised that there is no mention of the excellent 'Kshanam' here.
singhprashast2011 on 21st Apr 2018, 8:25pm | Permalink
BAAGHI 2 is a masterfully crafted, well made, edge of the seat thrilling, gripping and overall, entertaining action thriller which is also quite memorable since it delivers everything it was expected to [action and thrills]. I haven't seen BAAGHI as of now, bit this film's excellence has made me want to watch it soon. And of course, KSHANAM, the original film, too!

(And yes, action films aren't usually expected to show intense dramatic treatment, and thus expecting it is not right.)

ADVERTISEMENT
This page was tagged for
Baaghi 2 hindi movie
Baaghi 2 reviews
release date
Tiger Shroff, Disha Patani
theatres list
Follow @fullhyderabad
Follow fullhyd.com on
About Hyderabad
The Hyderabad Community
Improve fullhyd.com
More
Our Other Local Guides
Our other sites
© Copyright 1999-2009 LRR Technologies (Hyderabad), Pvt Ltd. All rights reserved. fullhyd, fullhyderabad, Welcome To The Neighbourhood are trademarks of LRR Technologies (Hyderabad) Pvt Ltd. The textual, graphic, audio and audiovisual material in this site is protected by copyright law. You may not copy, distribute, or use this material except as necessary for your personal, non-commercial use. Any trademarks are the properties of their respective owners. More on Hyderabad, India. Jobs in Hyderabad.