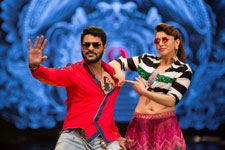 Veturi Sarma / fullhyd.com
EDITOR RATING
3.5
Performances
Script
Music/Soundtrack
Visuals
5.0
2.0
3.0
4.0
Suggestions
Can watch again
No
Good for kids
Yes
Good for dates
No
Wait for OTT
Yes
Gulebakavali, as the story goes, is a flower believed to have medicinal values that could cure blindness. But the makers of this film can't be bothered with such details since they've got silly gags coming out of their ears and they have to write many of them into the script and make a film out of them.

So this Gulebakavali is either the name of a village or the name of a temple or both - we are not sure which it is, so we'll go with the third option. The story revolves around a bunch of conmen lead by Badri (Prabhu Deva), a thief specializing in stealing idols from temples, who is entrusted with bringing back a treasure hidden under the Gulebakavali temple.

The folk of Gulebakavali, the village, do a Nirvana Pooja every once in a while where all of them stay at a specific place while one of the chosen villagers walks around the temple completely nude. In a curious turn of events, Vijji (Hansika Motwani) disturbs the Nirvana Pooja, and the villagers are hell-bent upon making her performing the Pooja.

Badri's plan to get the treasure is real simple. While the villagers are busy with the ritual, he and his group of oddballs (which includes Revathi) dig the temple and get the treasure - and it really turns out that way as well. No complications at all. So much for the adventure. The real conflict is with the people who want the treasure, and how they all fight between themselves in a silly climax makes up for the meat and potatoes of the plot. No prizes for guessing who walks away with the treasure.

Calling Gulebakavali a crime caper does not do the genre any justice since the film is anything but a crime caper. There is no action that builds up to the heist, nor are there any roadblocks in the way of the leads. It's just a bunch of gags thrown at will without any regard to narrative coherence or even it all making basic sense. Many of the jokes fall flat (or get lost in translation, this being a dubbed film). The script doesn't seem to care about any of them, and includes most of them in the hope that some work.

There is a running gag about a goon's biography that is funny for some time but gets stretched till it gets on everybody's nerves. Which is actually pretty much the case for just about everything in the movie. The film simply doesn't have enough material to be one, which is a real pity since they lined up quite an ensemble for this.

Prabhu Deva has a real flair for comedy, and he tries to sell as much of the levity as he can, but he can only do so much. The supporting cast are fine, and it's really good to see Revathi let her hair down, literally, in a goofy character. She doesn't disappoint, and even gets in a Mouna Ragam reference. Anand Raj seems to be playing the same don role that he did in Nenu Roudy Ne and Marakatha Mani, but he is probably glad that he is being cast at all. Hansika seems to have the best approach for this sort of movie - she is like on a picnic, and has fun with her role.

One can't really ask the technicians to elevate a script like this, and none of them appears to be in the mood for it anyway. The CGI is atrocious and the music is simply a bore. The songs break whatever tempo the film is building up, and since they have Prabhu Deva, they have to make him do his thing with some amazing dance moves.

Films like Gulebakavali are never made to be blockbusters, and given the number and kind of people we watched this one with, they are probably an acquired taste.
Share. Save. Connect.
Tweet
GULEBAKAVALI SNAPSHOT 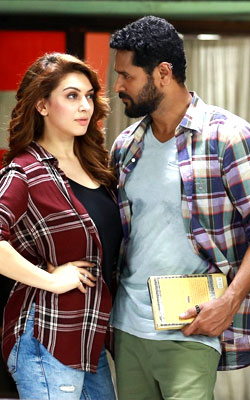 ADVERTISEMENT
This page was tagged for
nirvana pooja gulebagavali
Gulebakavali telugu movie
Gulebakavali reviews
release date
Prabhu Deva, Hansika Motwane
Follow @fullhyderabad
Follow fullhyd.com on
About Hyderabad
The Hyderabad Community
Improve fullhyd.com
More
Our Other Local Guides
Our other sites
© Copyright 1999-2009 LRR Technologies (Hyderabad), Pvt Ltd. All rights reserved. fullhyd, fullhyderabad, Welcome To The Neighbourhood are trademarks of LRR Technologies (Hyderabad) Pvt Ltd. The textual, graphic, audio and audiovisual material in this site is protected by copyright law. You may not copy, distribute, or use this material except as necessary for your personal, non-commercial use. Any trademarks are the properties of their respective owners. More on Hyderabad, India. Jobs in Hyderabad.