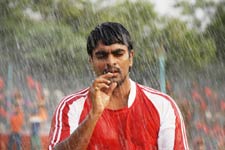 Ravi Kandala / fullhyd.com
EDITOR RATING
4.0
Performances
Script
Music/Soundtrack
Visuals
4.0
6.0
2.0
3.0
Suggestions
Can watch again
No
Good for kids
No
Good for dates
No
Wait for OTT
No
Remaking a film is not easy. A film is made in a certain language includes a lot of nativity and several scenes that the director knows will be appreciated by the target audience. When you remake the same film, you have to ensure that you keep the essence of the film intact while adapting it to the tastes of an entirely different audience, and this requires one of two things - tremendous skill, or the ability to add a lot of tomfoolery and buffoonery to the remake (any of Prabhu Deva's hit Hindi remakes).

Pustakam Lo Konni Pageelu Missing (PKPM) is a remake of the cult Tamil hit Naduvula Konjam Pakkatha Kaanom. The Tamil original became a runaway hit and propelled Vijay Setupathi (the guy we saw in Pizza) to some sort of stardom. It has been remade in Telugu instead of just being dubbed, but some of the actors and voices used in the movie are so atrociously, horribly terrible that we were left wishing they had just bought the remake rights and used the remaining money for better dubbing artistes.

The film is about Vijay (Sri) and his three faithful friends. Vijay is all set to be married in a couple of days. The friends gather at a local playground and decide on a game of cricket to relieve themselves of a few tensions. During the game, Vijay falls down while trying to take a catch, and this causes short-term memory loss. He forgets everything that happened in the previous year, including the girl he loves and is set to marry. How his three friends manage to get him married forms the rest of the story.

The plotline is quite novel and has none of the melodrama associated with the usual amnesia stories. The light-hearted treatment serves the film quite well, and the gang of friends including Mast Ali (Salim Pheku of the Hyderabadi movies) put in credible performances. Sajid Qureshi, a debutant director, however, fails to keep audience interest in the movie. The story would've made for a wonderful 90-100 minute film, but in its being stretched beyond the 2-hour mark with an item song and several dragged scenes, the impact is lost.

Sri, the leading man, puts on a perplexed expression in the beginning of the movie, and keeps it on till the end. Whether he was truly perplexed at the thought of having to act or was acting really well, is something that we will reserve our judgment on. The supporting actors, except the hero's friends, are uniformly bad - the kind that make you believe that you'd be a thousand times better.

There are three songs, at least one of which could've certainly been done away with. An item number as part of a wedding baraat has no place in a movie that attempts to be as real as this one. The songs are all sung by a cacophonic singer, making them a pain to bear. The production values are pretty non-existent, and a slightly higher budget could've done wonders for the movie.

PKPM is a film that delivers laugh-out-loud comedy in bits and pieces, and leaves you looking longingly at the exit in the remaining time. The movie is a commendable effort in terms of picking a clean storyline in these days of vulgar comedies, but the effort is not backed up with the right execution.
Share. Save. Connect.
Tweet
PUSTAKAM LO KONNI PAGEELU... SNAPSHOT
PUSTAKAM LO KONNI PAGEELU MISSING SNAPSHOT 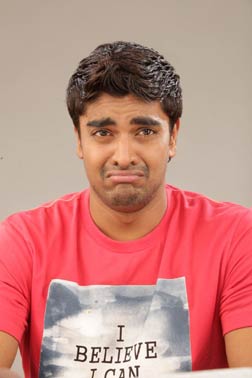 ADVERTISEMENT
This page was tagged for
Pustakam Lo Konni Pageelu Missing telugu movie
Pustakam Lo Konni Pageelu Missing reviews
release date
Srinivas, Supraja
theatres list
Follow @fullhyderabad
Follow fullhyd.com on
About Hyderabad
The Hyderabad Community
Improve fullhyd.com
More
Our Other Local Guides
Our other sites
© Copyright 1999-2009 LRR Technologies (Hyderabad), Pvt Ltd. All rights reserved. fullhyd, fullhyderabad, Welcome To The Neighbourhood are trademarks of LRR Technologies (Hyderabad) Pvt Ltd. The textual, graphic, audio and audiovisual material in this site is protected by copyright law. You may not copy, distribute, or use this material except as necessary for your personal, non-commercial use. Any trademarks are the properties of their respective owners. More on Hyderabad, India. Jobs in Hyderabad.