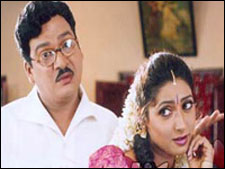 When you take movies, mythology and other such fiction out, there is no reason to believe that law-abiding ethical guys finish anywhere but last. Yes, isn't it? Aa Naluguru says this in bold, italics, underlined. The film is the tale of a willing loser, a good everyday guy who constantly sticks to his principles, fails, and finally kills himself unable to take his failures. Yes, this one's box-office destiny was written the day the script was bound. One whole star in the rating is simply for making this movie.

Raghuram (Rajendra Prasad) is an idealistic newspaper editor who does certain things the normal citizen of today would file him under "Crazy" for:

1. He donates half his earnings to charity
2. He believes in loving his fellow citizen and spreading love
3. He quits his job since he doesn't want to print semi-naked women in his paper
4. He won't pay a bribe to get his son a job, and he won't pay dowry for his daughter

What he gets of all this is enormous goodwill in society, even from the ruthless moneylender Kota (Kota Srinivas Rao). And, the ire of his family, since his wife (Amani) and kids find their lifestyle getting cramped due to his ideals. He has to incur huge debt to give his kids money to keep them off their threat to turn cheats, and, unable to honor the debt, kills himself.

The waft of creativity in the tale comes from his covenant with the messengers of death to let him hang around until his cremation, to see his family and friends' reaction to his death, and to see who the four persons will be who'll take him on his final journey. Yes, good things do happen. But let's not forget - Raghuram is dead. And hence, the moral of the story.

The tale doesn't fool itself into good triumphing in the end, and is well-narrated, albeit slow. Rajendra Prasad reminds you a bit of the scream that was Pelli Pustakam, only he's much older in this. The delightful frissons of chirpy domestic detail of Pelli Pustakam also peep in, though that was Bapu. The show-stealer, however, is Kota Srinivasa Rao, in a stellar performance mouthing hooter dialogues.

Since the movies are largely the only way that we can look into the details of other people's lives, and are thereby responsible for a large part of how we shape up today, Aa Naluguru has the potential to change some among its audience, though maybe only by 5%. Or lesser. Or 500%. It will not get much audience. Like most good people.

Like Kota says, Raghuram has too many bad habits. And all unfashionable.

ADVERTISEMENT
This page was tagged for
aa naluguru telugu full movie download
advertisement in english
Aa naluguru movie preview in telugu
aa naluguru movie review greatandhra
Aa naluguru movie story in telugu
Follow @fullhyderabad
Follow fullhyd.com on
About Hyderabad
The Hyderabad Community
Improve fullhyd.com
More
Our Other Local Guides
Our other sites
© Copyright 1999-2009 LRR Technologies (Hyderabad), Pvt Ltd. All rights reserved. fullhyd, fullhyderabad, Welcome To The Neighbourhood are trademarks of LRR Technologies (Hyderabad) Pvt Ltd. The textual, graphic, audio and audiovisual material in this site is protected by copyright law. You may not copy, distribute, or use this material except as necessary for your personal, non-commercial use. Any trademarks are the properties of their respective owners. More on Hyderabad, India. Jobs in Hyderabad.