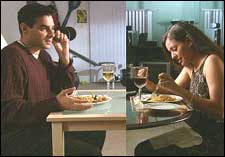 The film doesn't use its actors as props to the comedy, instead putting them in believably awkward circumstances and then letting the characters to the talking. The funnies work, more because they're real somehow. These are things you can actually imagine people saying, unlike those desperate attempts of humor often delivered as one-liners in similar films of the past.

The story is narrated to make sense of several lives that run into each other as they follow seemilingly different, but essentially the same, goal: security, whether it's marital, job-related, or familial. We start of at the scene of a wedding and return to it at the end of the movie. Only the second time around, you know where each character is coming from.

Radhakrishna - or Rads as he prefers to be known - is marrying the girl he (Anupam Mittal) loves, Jenni (Jicky Schnee), and his parents are visiting for the wedding. Anjan Srivastava and Bharati Achrekar play the role of this adorably anxious couple (they are still as great together as they were in Wagle Ki Duniya). While they truly want their son's happiness, they're are a little fazed by his extremely blonde wife. Will she tire of him after marriage like her mother did her father? Or does divorce skip a generation? These and other perfectly improper questions are thrown and dodged with equal unease on both sides.

Other people who are finding the American way of life a little too difficult are Nikhil (Gaurang Vyas) and Vivek (Mohit Shah). Both have been laid off at work, victims of the IT downslide. While one waits jobless and heartbroken, making blank calls to his secret love back home, the other continues to set out to work everyday to keep up appearances with his wife.

The wife, Sangita (Sireesha Katragadda), also inhabits a lonely world. She's bored out of her skull at home and even her little routines fail to add that much-needed spark. Speaking of sparks, there are some flying coast-to-coast as two longtime friends take things to the next level. Or at least, he wants to. She, being undecided, goes through the motions of groom-hunting, and is temporarily intrigued by a man who runs his own software company and jogs for fun. And has a last name that no one can pronounce without the help of cue cards.

All these people are connected by friendship or a chance meeting. Flavors doesn't pull any surprises on you, but it manages to make the ride fun. It's edited well, and you're kept interested all along. We wouldn't call it a rip-roaring comedy; it's more of a warm chuckle or two at the oddities of a world we've all known at least in passing.

ADVERTISEMENT
This page was tagged for
Flavors english movie
Flavors reviews
release date
Reef Karim, Pooja Kumar
theatres list
Follow @fullhyderabad
Follow fullhyd.com on
About Hyderabad
The Hyderabad Community
Improve fullhyd.com
More
Our Other Local Guides
Our other sites
© Copyright 1999-2009 LRR Technologies (Hyderabad), Pvt Ltd. All rights reserved. fullhyd, fullhyderabad, Welcome To The Neighbourhood are trademarks of LRR Technologies (Hyderabad) Pvt Ltd. The textual, graphic, audio and audiovisual material in this site is protected by copyright law. You may not copy, distribute, or use this material except as necessary for your personal, non-commercial use. Any trademarks are the properties of their respective owners. More on Hyderabad, India. Jobs in Hyderabad.