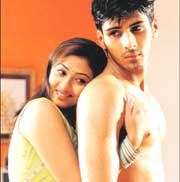 Deepa Menon / fullhyd.com
EDITOR RATING
1.0
Performances
Script
Music/Soundtrack
Visuals
NA
NA
NA
NA
Suggestions
Can watch again
NA
Good for kids
NA
Good for dates
NA
Wait to rent it
NA
The Kannada film industry (Kollywood?) has come in for a lot of flak lately for not doing its bit to fight piracy. The opinion of the other Southern film industries seems to be that if you're not with us, you're against us. Monalisa is proof that they're definitely against us.

Why else would Kollywood - unlike its Southern counterparts, for e.g. Tollywood and Mollywood - unleash such a torrid blast of ham and spam at us? What really hurts is the assumption that we can't produce equally nauseating tripe in our own state. And did they really think we'd sit through almost three hours of chronic melodrama just to catch the occasional glimpse of jiggling bosom or wobbling navel? The only reason we even ventured into the cinema hall was because we were attracted by the unique concept of a hero on skates. We happen to be a very sports-minded people.

Mona Lisa has plenty of action of the humorous and non-humorous sort, and the first category includes stunts on roller-skates. Talk about overshooting. Dhyaan is an unremarkable graduate with one ambition in life - to marry a girl who is dumber than him and has smaller biceps. But such a combination is rare to find in a homo sapiens. Still, Dhyaan believes it will happen for him someday and his faith is rewarded when Mona Lisa walks into his life.

Mona and Dhyaan spend a night together in his father's shopping mall, where they discover that they cannot live without seeing each other's face. This can be a real problem when you need to use the loo, but our two lovers are undaunted. From such undying love is born one title song and several background dancers in alarming shades of red.

Unfortunately their love is not to be, and Dhyaan's world comes crashing down when he hears that Mona was killed on her way to meet her father in America. His deep distress is conveyed through a series of scenes that can only be described as touching. In fact, as the hero pours his heart out to an unsuspecting camera, you feel like your nerves have been stretched from end to end and are being gently plucked by a blunt toothpick.

Sadaf in her double-role as Mona Lisa and Dhyaan's lawfully pregnant wife Spandana later in the film, shows potential for better things than bathing her sick husband and clutching him tearfully to her afore-mentioned bosom. She has a keenness for the camera that might actually work for her if she tried something other than standing around and sobbing.

The dubbing of the film is botched and the bonus comedy track is stressful. Bramhanandam and Kovai Sarala play their part in a sequence that gets a shade less funny every time it's performed, and which is about as pleasurable as a lobotomy to begin with, so you do the math.

A quick body count toward the end of the film reveals: one confused hero, one coyly pregnant heroine, and her look-alike in skin-tight pants. Which one does Dhyaan love? Which one can make the greater sacrifice? Which one will get to take him home before his bedtime? Villains are speared, babies are delivered and hearts are won. Moral of the story: marriage can be arranged, but love cannot.

Monalisa was a super-duper-fruper hit in Karnataka. We say, let them keep the pirated CDs; it would be an act of kindness.

ADVERTISEMENT
This page was tagged for
monalisa telugu movies
Monalisa telugu movie
Monalisa reviews
release date
Sammir Dattani, Sadaf
Follow @fullhyderabad
Follow fullhyd.com on
About Hyderabad
The Hyderabad Community
Improve fullhyd.com
More
Our Other Local Guides
Our other sites
© Copyright 1999-2009 LRR Technologies (Hyderabad), Pvt Ltd. All rights reserved. fullhyd, fullhyderabad, Welcome To The Neighbourhood are trademarks of LRR Technologies (Hyderabad) Pvt Ltd. The textual, graphic, audio and audiovisual material in this site is protected by copyright law. You may not copy, distribute, or use this material except as necessary for your personal, non-commercial use. Any trademarks are the properties of their respective owners. More on Hyderabad, India. Jobs in Hyderabad.