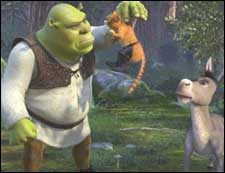 Deepa Menon / fullhyd.com
EDITOR RATING
7.0
Performances
Script
Music/Soundtrack
Visuals
NA
NA
NA
NA
Suggestions
Can watch again
NA
Good for kids
NA
Good for dates
NA
Wait to rent it
NA
The beefy ogre and his smartass well, ass are back. If Shrek was clever, funny and sentimental, its sequel trots the line well and with only a few traces of self-conscious buffoonery. The wisecracks, the PJs and the hee-haw moments are all here, plus some hilarious new characters. Introducing Antonio Banderas, the sexiest beast to ever cough up a fur ball.

Shrek (Mike Myers) and Fiona (Cameron Diaz) are quite settled in their happy little cottage by the swamp. If an ogre couple could be happier, they'd need rehab: these two lovers run through fields of daisies, kiss fervently against the sunset and even shave together every morning. Aww.

Donkey, the donkey, is still around and woefully single. But he (Eddie Murphy) isn't despondent for very long, because adventure is round the corner. Actually, in a land Far, Far Away. Fiona's parents, the king (John Cleese) and queen (Julie Andrews) of Far, Far Away, invite their daughter and son-in-law for a royal homecoming. Bring out the red carpet and let the subjects rejoice, for the princess has returned with her Prince Charming.

But um, who are those green people?

After an ice-cold reception at the king's palace and a screaming match with His Highness, Shrek decides he's had enough of royalty. The feeling is mutual, and with sufficient goading from the evil godmother, the king puts a hit on his new son-in-law. And the cat for the job is Puss, In Boots (Banderas). Not only can he successfully put the 'pointy end into the other man', this feline also makes the most illegally cute sad-face in the world. And you thought puppy dogs were bad.

Well, the rest of the story is a high-speed, nutball adventure featuring magic potions, a gigantic gingerbread man and Pinocchio's great Mission Impossible rescue. Corny, corny, corny. While Fiona's in danger of being kissed by the fake, smarmy Prince Charming, her real hero battles nymphomanical milkmaids, devious godmothers and his own latent inferiority complex. Love triumphs, of course, and so do all the bad, bad puns.

Some people might tell you Shrek 2 suffers the curse of the sequel, but it's still funnier and has more heart than most movies with the same suffix. So be indulgent, be sentimental and be tickled.

ADVERTISEMENT
This page was tagged for
Shrek 2 english movie
Shrek 2 reviews
release date
Mike Myers, Cameron Diaz
theatres list
Follow @fullhyderabad
Follow fullhyd.com on
About Hyderabad
The Hyderabad Community
Improve fullhyd.com
More
Our Other Local Guides
Our other sites
© Copyright 1999-2009 LRR Technologies (Hyderabad), Pvt Ltd. All rights reserved. fullhyd, fullhyderabad, Welcome To The Neighbourhood are trademarks of LRR Technologies (Hyderabad) Pvt Ltd. The textual, graphic, audio and audiovisual material in this site is protected by copyright law. You may not copy, distribute, or use this material except as necessary for your personal, non-commercial use. Any trademarks are the properties of their respective owners. More on Hyderabad, India. Jobs in Hyderabad.