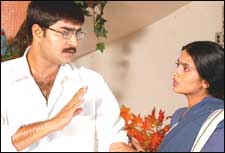 Deepa Menon / fullhyd.com
EDITOR RATING
1.0
Performances
Script
Music/Soundtrack
Visuals
NA
NA
NA
NA
Suggestions
Can watch again
NA
Good for kids
NA
Good for dates
NA
Wait for OTT
NA
Tender Hearts is what the title of the film translates to. It’s a thoughtful and considerate step to name it that, thus weeding out from the audience people with any sense. The ones who braved that title, however, are either wetter than a soggy golgappa or they genuinely thought this was going to be a meaningful film. Well, if meaningful is the same as skull-cavingly dull, then, yes, this is one heck of a movie.

Raise hands those of you who have watched Naa Autograph. Now, raise hands those of you who thought it moved too fast. For instance, many a time the camera completely neglected to follow each blink of the actors’ eyes. Well, Letha Manasulu makes good on that precious loss by filming not just every blink, but even repeating it in slow-motion in the guise of a flashback. You can put your hands down now, by the way.

Raju (Srikanth) and Dhanu (Kalyani) are childhood sweethearts in a rural setting. At least, that was the brief. And the execution is thoroughly thorough, capturing each little aspect in full detail. A good job on this, but how much of budding-young-love-in-a-rural-setting can you take? This is a good time to find out.

Unfortunately for the two lovers, things don’t work out and while Raju goes off to pass MBA in first-class, Dhanno is forced to marry the first sailor that comes along. Years later, Raju remembers their innocent-yet-boring love story when he is proposed to by the daughter of a wealthy man. He agonizes over the decision. How can he marry Bhanu
(Gopika) when he still carries a flame for Dhanu?

Deciding, however, to move on and take his stock options by the horns, Raju marries the wealthy man’s daughter. They are happy and at peace when one day Raju comes across his old love, now much impoverished. Dhanu’s husband dies and leaves her with a young son. Raju is so moved by her plight he takes her home and installs her as the maid. Nice move, lover boy.

While the audience might suspect Raju is still a little bit in love with his girlfriend past, he, however, denies it vehemently. Unfortunately, his wife walks in on of the many (read many) flashback scenes and all hell breaks loose, but slowly. Wouldn’t want to rush things and confuse the audience.

Letha Manasulu takes a run of the mill story and drags it out till the cows come home and crap on it. This is the kind of movie that really wants to capture the little things, the little joys of life, but it goes overboard. There’s a difference between telling a good story and telling a good story that ends sometime during this millennium. Letha Manasulu was better left unsaid.

Kalyani Performance is a highlight.

she did a role of lady with difficulties,that too after a jovial role(pedababu).

Keeravani's music is pleasant except for first song.

Watch it for songs and kalyani's action.

ADVERTISEMENT
This page was tagged for
Leta Manasulu telugu movie
Leta Manasulu reviews
release date
Srikanth, Kalyani
theatres list
Follow @fullhyderabad
Follow fullhyd.com on
About Hyderabad
The Hyderabad Community
Improve fullhyd.com
More
Our Other Local Guides
Our other sites
© Copyright 1999-2009 LRR Technologies (Hyderabad), Pvt Ltd. All rights reserved. fullhyd, fullhyderabad, Welcome To The Neighbourhood are trademarks of LRR Technologies (Hyderabad) Pvt Ltd. The textual, graphic, audio and audiovisual material in this site is protected by copyright law. You may not copy, distribute, or use this material except as necessary for your personal, non-commercial use. Any trademarks are the properties of their respective owners. More on Hyderabad, India. Jobs in Hyderabad.