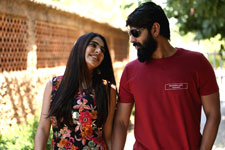 Josh / fullhyd.com
EDITOR RATING
2.5
Performances
Script
Music/Soundtrack
Visuals
6.0
2.0
6.0
7.0
Suggestions
Can watch again
No
Good for kids
No
Good for dates
No
Wait to rent it
Yes
If you had the relevant context, I could finish my review of Thipparaa Meesam in one line. And that context is as follows.

My colleague T J Reddy is one of the harshest task-masters when it comes to rating films. There are numerous occasions where I was quite happy with a film and got perplexed by his lukewarm ratings. This man, who is difficult to please, gave Mental Madhilo a 7 on 10, and called it "a dark horse candidate for being called one of the best Telugu movies of the year". It's sneakily good, he said. Mental Madhilo starred this guy called Sree Vishnu.

I didn't watch Mental Madhilo. But I watched Needi Naadi Oke Katha the next year. And I will have you know it is the second most affecting Telugu film I watched last year (standing second only to the incredible C/O Kancharapalem). Needi Naadi Oke Katha made me relate to it like I was living in that family and struggling with the fatally flawed expectations of my own father. In an ecosystem where stories are clichés, cleavage and climax fights, Needi Naadi Oke Katha was an intensely moving experience I just wasn't prepared for. And that film starred this same guy, Sree Vishnu.

And this year, there was the rib-ticklingly funny Brochevarevaruraa which I watched three times and purchased about eight tickets for, overall. It was quirky and clean, and I really enjoyed that neat writing trick they pull off at the midpoint. By now, I (along with my wife) was convinced that Sree Vishnu is a force to reckon with. He may not produce blockbusters and not satisfy everyone, but he's got our trust.

With this context, I give you my one-line review: Thipparaa Meesam is as bad as Needi Naadi Oke Katha was good.

Given the facial hair on the hero and the title, I fully believed Thipparaa Meesam was going to be Sree Vishnu's entry into the mass film hero pantheon and, being a mass film afficionado, I was very interested in seeing how he interpreted the genre. I thought maybe it will be like the Tamil new-age actor Vijay Sethupathi's Sethupathi which skillfully subverts our expectations but manages to be a satisfying mass film at the end of it. I expected a similar subversive mass film in Thipparaa Meesam, and what do you know, it's not a mass film.

Discounting the rare exceptions, the short film world is a vehicle of low-budgets and the ensuing unskilled work, fuelled solely by passion. It is a heartening world to behold because people make these films knowing full well they are going to be underwhelming. And there's nothing wrong with that when these filmmakers haven't got the budgets, the distribution networks, or even the time to fully focus on their craft.

But it is unacceptable to have to sit through a movie which has the budget, and the talent needed to pull off a passable film, and yet never rises above the characteristic disengagement of short films. Indeed, Thipparaa Meesam has some great visual work, trippy music, and very talented actors. Sree Vishnu is as committed as ever. Rohini is the embodiment of trustworthiness.

And yet, I had to stretch my eyebrows and rub my eyes to make sure I didn't fall asleep. And I sorely missed the skip-forward-by-ten-seconds button which, had it existed, I would have banged to oblivion.

I asked my cousin to join me for the show. He couldn't because he had an exam. Shortly afterwards I let him know that he was a lucky @*!^%. Unfortunately, my poor wife offered to join me (because, hey!, this is that Sree Vishnu guy!) and shortly afterwards I felt sorry for her to have married me.

Well, that would be review enough for a number of people. But you may still want to know the plot. It is my professional duty to have you get a glimpse.

Mani (Sree Vishnu) participates in an illegal game of underwater tug-of-war. The opposite side cheats. He goes and punches them underwater. Given that fighting isn't like sex, watching someone punch someone underwater is as interesting as watching a tortoise chase a snail. Later on, Mani declares to deafening background music that he doesn't like losing any game. ...yawn...

Mani hates his mother (Rohini) because she sent him to rehab when he was young because he did drugs. Now he works in a pub as a DJ and goes to his mum only when he needs money from her. By and large he is a disgusting parasite, and his mother is a disturbing host. Most of the movie is merely the escalation of who can demonstrate worse judgement. Can he harass her more? Will she indulge him even more? ...yaaawn...

Long voice-over primarily telling us that the writer is lazy and doesn't believe in "Show, don't tell", and secondarily narrating to us that Mani is weird, he doesn't see the sun because he likes darkness, he works as a DJ in a pub, is ...yaaawn... neck-deep in debt, wants ...yaaaaawn... to be addicted to a girl from first sight, plays more ...yaaaaaaawn... games... and ...yaaaaawn... 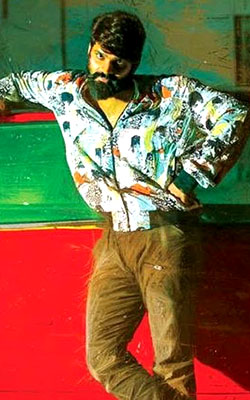 See Thipparaa Meesam full details
THIPPARAA MEESAM USER REVIEWS
1 - 2 OF 2 COMMENTS
POSITIVE  |  NEGATIVE |  NEWEST  |  OLDEST  |  MOST HELPFUL  |  LEAST HELPFUL
TJ Reddy on 14th Nov 2019, 9:29am | Permalink
You know as well as I do that the reason for my ratings being very conservative comes down to filmmaking technique and consistency in writing.

ADVERTISEMENT
This page was tagged for
Thipparaa Meesam telugu movie
Thipparaa Meesam reviews
release date
Sree Vishnu, Rohini
theatres list
Follow @fullhyderabad
Follow fullhyd.com on
About Hyderabad
The Hyderabad Community
Improve fullhyd.com
More
Our Other Local Guides
Our other sites
© Copyright 1999-2009 LRR Technologies (Hyderabad), Pvt Ltd. All rights reserved. fullhyd, fullhyderabad, Welcome To The Neighbourhood are trademarks of LRR Technologies (Hyderabad) Pvt Ltd. The textual, graphic, audio and audiovisual material in this site is protected by copyright law. You may not copy, distribute, or use this material except as necessary for your personal, non-commercial use. Any trademarks are the properties of their respective owners. More on Hyderabad, India. Jobs in Hyderabad.